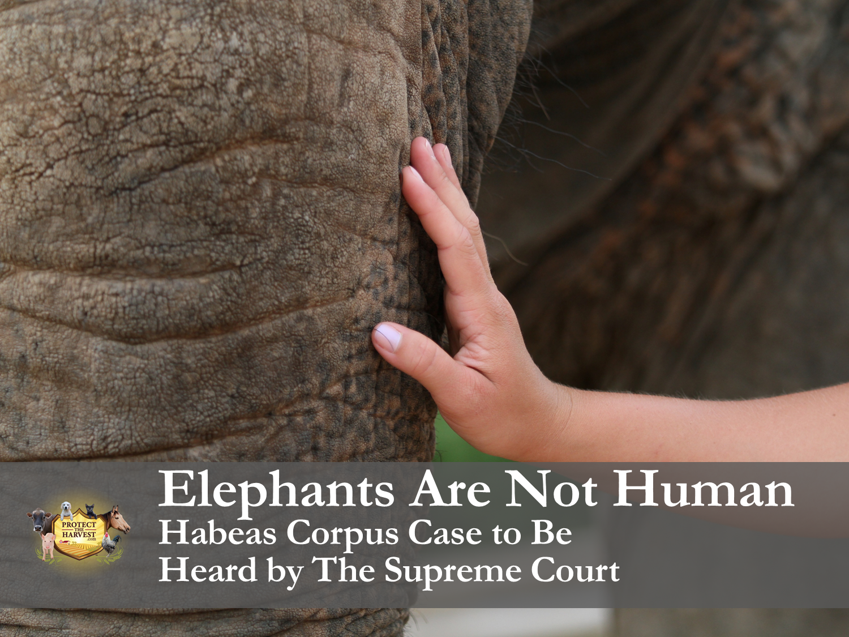 On March 28th, 2022 the New York State Court of Appeals issued a notice that they are scheduled to hear the Habeas Corpus appeal involving Happy the Elephant at the Bronx Zoo. filed by an animal liberation group, NonHuman Rights Project (NhRP) has been ongoing since 2018.

Better than 3.38 million dollars has been spent on legal fees to defend against this action which will impact animal owners across America. To date, 1.3 million has been spent on Amicus Curiae briefs by all parties. Protect The Harvest, is an organization that stands up for the interest of animal owners and we have joined this fight. While we are not a party to the matter, we have participated in these briefs as a “friend of the court” and have joined with other parties to submit briefs in action from day one. According to the website businessjustice.com, “the amicus curia brief can play an important, and sometimes critical, role in appellate advocacy by bringing relevant facts and arguments to the court’s attention that the parties have not already addressed.”
To fully comprehend the significance of these legal actions, along with the impact on all animals and animal ownership as well as human civil rights, it is necessary to look at what habeas corpus means.

Habeas Corpus is for Humans, Not Animals

The ability for an animal to have habeas corpus would imply that they are persons and can participate in a social contract. However, animals are unable to be held legally liable for their actions. Even if an animal, such as a chimpanzee, has some human-like traits, that does not make the animal a person.

Habeas corpus for animals brings rise to a number of questions:
• If an animal were to be awarded habeas corpus, where would the line be drawn for future cases?
• What is to stop animal rights extremists from litigating further?

Habeas corpus is a common law civil right; it was written for and by people. Taking the law out of context to make it fit into the animal world reduces the significance of our human civil rights. Habeas corpus was written into our Constitution by our forefathers to protect human beings. Animals were and still are considered a person’s property and thus do not need protection from imprisonment.

What is Habeas Corpus?

Habeas corpus has roots that extend back to the 12th Century in England and is most commonly referred from the Magna Carta. The Magna Carta states the following:
“No Freeman shall be taken or imprisoned, or be disseized of his Freehold, or Liberties, or free Customs, or be outlawed, or exiled, or any other wise destroyed; nor will We not pass upon him, nor condemn him, but by lawful judgment of his Peers, or by the Law of the land”

The United States added habeas corpus to our own Constitution during its establishment under the Suspension Clause, Article One, Section 9.

It is written as:
"The privilege of the writ of habeas corpus shall not be suspended, unless when in cases of rebellion or invasion the public safety may require it."
The main purpose of habeas corpus is to inquire about the validity of a prisoner’s custody. It is often used to determine if the court had jurisdiction to impose a sentence. As this is a civil right, the sole purpose is to protect the freedom of humans from infringement. Essentially, in modern usage, habeas corpus refers to the right of a detained individual to be brought before a court or judge to determine whether the imprisonment is legal and justified.

In 2007, a group called the Nonhuman Rights Project (NhRP) formed. Their main goal is to change the status of animals to have the same rights as humans. The mission statement on their website states:
“To change the common law status of great apes, elephants, dolphins, and whales from mere things which lack the capacity to possess any legal right, to legal persons who possess such fundamental rights as bodily liberty and bodily integrity.”
To get this accomplished, the NhRP works both locally and globally in grassroots and legislative campaigns. The founder of this group, Steven Wise, has an extensive background in animal rights. In the past he worked as the former president of the Animal Legal Defense Fund and has written multiple books on the animal rights movement. Has also taught animal rights law at Harvard Law School, Vermont Law School, and Tufts University School of Veterinary Medicine among others. The NhRP website states that they have sought habeas corpus for 8 animals. Seven of these cases have been dismissed or overturned.

A February 2022, article in The New Yorker outlines information about the Bronx Zoo and the Wildlife Conservation Society.

It also provided a quote from Bronx Zoo Director, James Breheny:
“Few organizations have done as much for protecting animals in nature as the Wildlife Conservation Society, which, in addition to the Bronx Zoo, operates the Central Park Zoo, the Prospect Park Zoo, the Queens Zoo, and the New York Aquarium. The society focusses on the conservation of six ‘flagship’ groups: apes; big cats; sharks, skates, and rays; whales and coastal dolphins; tortoises and freshwater turtles; and elephants. One of the society’s first projects, in 1905, helped save the American bison from extinction. A campaign called 96 Elephants—named for the number of elephants thought to be killed every day by poachers—was launched in 2013. James Breheny, the director of the Bronx Zoo, stated that the society had ‘led the charge to help stop the ruthless slaughter of 35,000 African elephants each year for the ivory trade.’”

“As for Happy, Breheny declared, with evident frustration, ‘We are forced to defend ourselves against a group that doesn’t know us or the animal in question, who has absolutely no legal standing, and is demanding to take control over the life and future of an elephant that we have known and cared for over 40 years.’ He went on, ‘They continue to waste court resources to promote their radical philosophical view of ‘personhood.’”

In September of 2021, several veterinary groups weighed in with their own Amici Curiae Brief in support of the Wildlife Conservation Society and the Bronx Zoo. These groups included the American Veterinary Medical Association (AVMA), New York State Veterinary Medical Society, and the American Association of Veterinary Medical Colleges. The AVMA represents about 75% of veterinarians in the United States and hold 97,000 members. The AAVMC represents more than 40,000 faculty, staff, and students and the NYSVMS represents more than 2,000 licensed veterinarians in New York State. The brief consists of 46 pages and can be reviewed by opening the link at the bottom of this article. The brief contains many valuable statements.

This is the opening:
“The veterinary community is filing this brief because it is gravely concerned that redefining the human-animal legal system in this way will negatively impact animals’ welfare. History has shown that animal ownership is not only permissive, it is protective. Congress and state legislatures, as well as courts, have long enacted 5 important safeguards and regulations that promote responsible animal ownership, deter abuse, and advance animal care. Changing these rights and responsibilities, as proposed here, would create instant, enormous, and pervasive confusion. It could limit—or even eliminate—the ability of animal owners to choose the proper course of treatment for their animals by subjecting their decisions to outside intervention by third parties. If animals do not receive the timely care they need, including during legal battles over their fate, they are the ones who will suffer. Ownership is the true pro-animal position. Animal owners, including zoos, should remain responsible and accountable for properly caring for and treating their animals. Because this lawsuit promotes animal personhood rights above animals’ welfare, it should be rejected.”

This Decision Will Impact Animal Owners, Veterinary Medicine and Agriculture Across the County

The upcoming May 18th trial in the Court of Appeals in New York, the equivalent of the State Supreme Court, has the potential to cause a devastating impact on animals and animal welfare across the country. A decision to award habeas corpus would be a grave step towards pushing society to no longer see an animal as an animal and respect its unique differences from that of human beings. If an animal is awarded civil rights the end result is that they will no longer be property. This will mean that someone else can make decisions about what is best for our own animals. We will no longer be able to make decisions in their best interest.

It would ultimately cause the closing of every educational zoo, and every laboratory conducting lifesaving research that benefits both animals and humans. It would certainly impact our precious food system and even your owning a pet will become a thing of the past. It will impact the cost of veterinary care and veterinary professional liability insurance, and it can also impact the way in which veterinarians practice medicine.

Where will the line be drawn in the United States?

What will happen to the animals we share our daily lives with?

More About The Difference Between Animal Extremism and Animal Welfare HERE