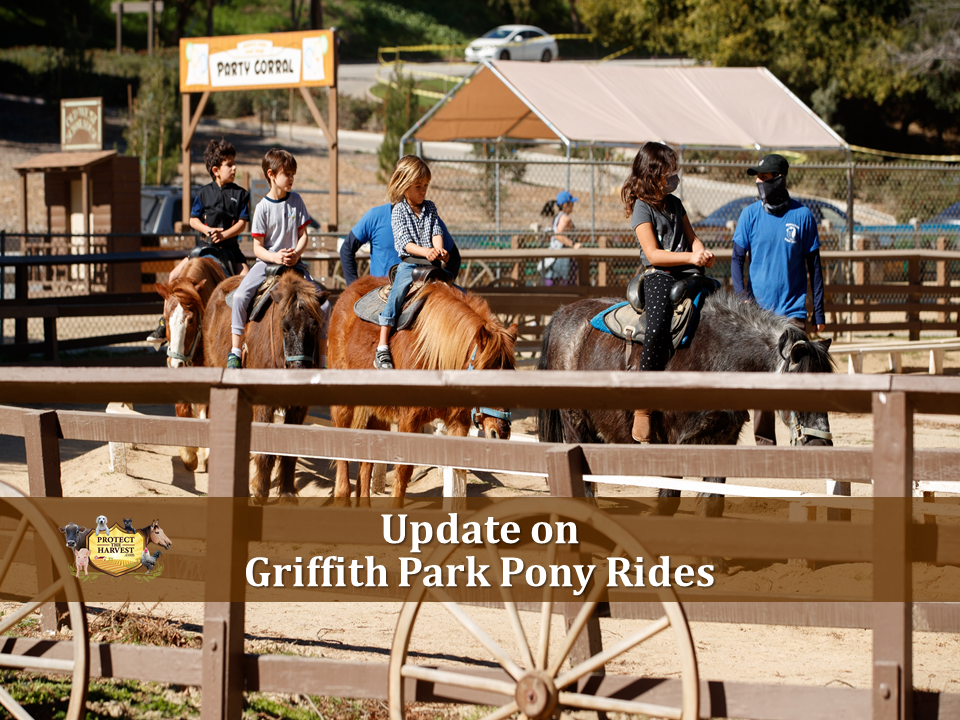 Protestors have been gathering at the Griffith Park Pony Rides since September, claiming that the ponies are abused, unhappy, depressed and enslaved. All of this, of course, is their false narrative designed to tug at the hearts of kind-hearted people. The protestors tell moms with small children that allowing the child to ride the horse makes the child an abuser. These ponies are trained “at liberty” and work with hand motions, finger snaps, clucking, and kisses.

Pony taking itself for a walk. The ponies are free to rest, stand in the sun or shade, or take themselves for a walk while on their breaks.

Our representative who has visited the pony rides multiple times had suspected the protestors were paid, as they would check their watches regularly, and after two hours, pack up and leave. If one is passionate about an issue, one doesn’t expect to be paid, nor are they expected to pack it in at a specified time. On Saturday, February 12, there was confirmation that the Pony Ride protestors are paid and the leaders don’t even LIVE in the area nearby.

On Saturday, Pony Ride owner Stephen Weeks’ home was a second target of their protest. Fortunately, Mr. Weeks had intercepted documentation of the protest, notified LAPD and others, and stayed home to be prepared against this latest onslaught. Here is his accounting of the incident:

“Hello Everyone. So there is more action on the pony ride protestors. Yesterday a group of protestors showed up at my home with their signs and loud chanting. Their signs said 'your neighbor Steve Weeks is an animal abuser', which they loudly chanted for two hours.

“What they didn't know was that I have had a plan to defend my home for some time anticipating them. Within minutes I had my armed guard service at my front door, with two LAPD black and white units parked nearby watching. I have had 24-hour video recording cameras installed around the entire perimeter of my house. There is a legal requirement in Los Angeles that requires protestors who protest at a personal residence to keep a distance away from the house of 300 feet. Not to even parade by the house. The code also allows me to sue for $1,000 plus attorney fees for each protestor who doesn't obey that distance. I also had a video drone fly over the protest at my house to record exactly where they were standing. My neighbors had already been advised of their possible protest. Several neighbors approached me after their protest and said that the neighborhood was 100% behind me. At one point they tried to use a bullhorn and the LAPD quickly shut that down as also against the law.

“There were actually several good things that came out of their demonstration. Their license plates were photographed and we were also able to discover their real names and home addresses, since social media names being used have been different from their real names. The leaders of these protests each live more than an hour north and south of Los Angeles. Everything has been passed on to my attorney and law enforcement.

“We have long suspected that many of these protestors against the pony rides were actually just paid protestors. This is now confirmed. One of the protestors told our security guard, ‘I'm from San Francisco. I was here visiting a friend and he asked if I wanted to make some quick money by joining the protest. I don't know anything about what's happening at the pony rides’.

I just wanted to inform you of what's happening and thank you all for your support.”

We will keep you informed of the information to call into the meeting on the 17th and give instructions of what to do to get your voice heard.

A petition has been created to save the Griffith Park Pony Rides and to show the Los Angeles City Council that the Pony Ride offers an opportunity for underserved children to experience riding a pony for a nominal price.