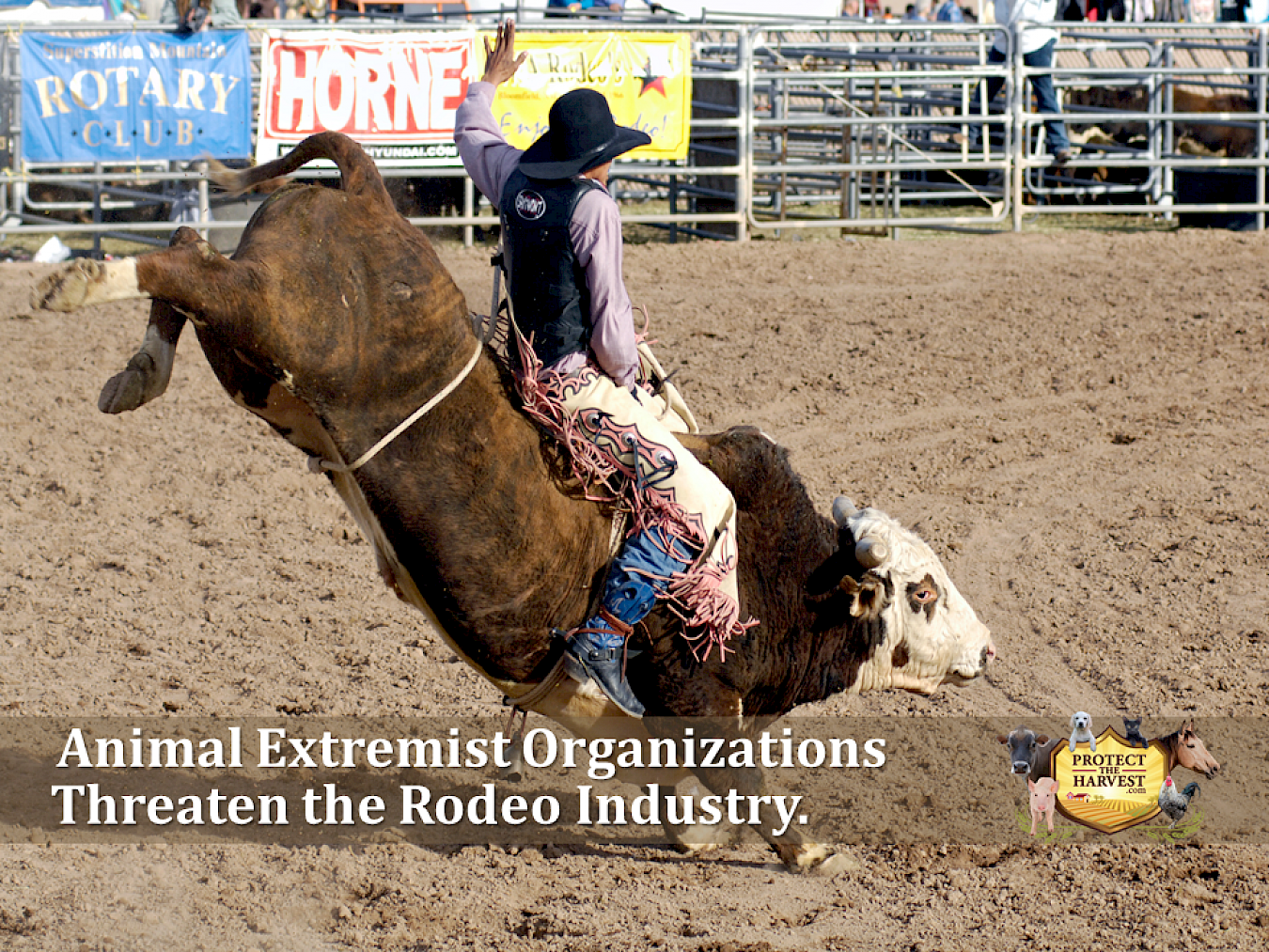 In 2017, the world saw the end of an era as Ringling Brothers Circus shut its doors after 147 years. Animal extremist groups cheered as they not only dismantled an American tradition, but also took a chunk out of our opportunity to interact with exotic animals and see animals perform. Many worried that rodeo would be one of the next events in the crosshairs of animal extremist groups. Unfortunately, that worry is true. Over the past few years, we have seen an increase in rodeos being targeted by animal extremist groups across the country.

Ignorance Fuels Animosity
States like California, Rhode Island, and Nevada have passed laws that ban or tightly regulate rodeo events; and some city ordinances have followed suit like San Francisco and Irvine. Even the rodeo in Houston, TX, at NRG Stadium, is consistently bombarded with protests at their events. After protesters made the local news claiming that as soon as the steers were done at the rodeo they were shipped to slaughter, the managing director of sports and events corrected the protesters by explaining: “Those trucks are taking them to property the rodeo owns about four miles away from NRG Park. There's not enough room to house them at NRG Park, so they are brought in on trucks for their events and then returned. That whole facility is designed with this in mind," she said. "It's all about the livestock welfare and giving them a great space to graze and relax."

The rodeo’s President and CEO also countered with:
“Everyone's entitled to their own opinion. But people are not entitled to make up their own facts."
It is clear in this single interaction that a lot of what fuels the animosity towards rodeo is simply ignorance or misinformation.

The rodeo industry has its work cut out for it to rectify the misinformation about its practices that have been spread for decades. One practice in particular has been a target for years and is completely false. Animal extremists claim cruelty in the sport of bull riding by saying that the bulls are tormented in order to get them to buck, by way of the flank strap. Grasping at straws, they have claimed it torments the bulls by tying up their testicles, or that it has wire in it. Neither of these claims are true at all. Anyone involved in rodeos know that these bulls have been selectively bred for years in order to buck the way that they do. They are not unlike any other purposefully bred animal. Additionally, they are considered valued professional athletes and are treated as such. They receive premium care in every aspect of their lives and after their career, they often live out their days as breeding bulls to create the next generation of bucking bulls.

Youth Rodeo at One of Iowa’s Largest County Fairs Threatened
For the last several years, a very small group of animal extremists have protested the family rodeo at the Johnson County Fair in Iowa. Protesting worked to eliminate the fair’s professional rodeo. It appears the family rodeo is next on their agenda.

The Johnson County Fair is one of the biggest in the state and is attended by people from all walks of life. One of the most popular evening events is the family rodeo. This free event draws an audience of 1,800-2,000 people to the stands, all cheering for the kids who participate in the four events.

In addition to protesting, the group of extremists also started to speak out at Johnson County supervisors’ meetings and passing around a petition (garnering only 380 signatures). The purpose of both these actions was to stop the rodeo using the county’s grant funds to the Johnson County Agricultural Association (JCAA), who runs the fairground, as leverage. They asked the supervisors to completely withhold the grant until JCAA canceled the family rodeo. Thankfully, word got around about the tactics being used to defund the youth rodeo events. In a joint effort, the JCAA, Sandburr Rodeo Productions, INC, parents, and other community members spoke up on behalf of the youth rodeo. If these groups had not come together in a united front, it is likely the rodeo would have been cancelled.

During our research, we found from supervisors’ meeting minutes that the county grant amount to JCAA stayed the same for 2019, but the county supervisors asked that none of those funds be used for the family rodeo. However, due to the support shown, the family rodeo now has community sponsors and will remained free at the 2019 fair.

Fans, participants, and organizations that support rodeo need to take this lesson to heart. If the community had not been made aware of the tactics being used behind closed doors in the supervisors’ meetings, they could have lost their rodeo altogether.

Showing public support of rodeo in a professional and respectful way will help combat the animal extremism agenda. We cannot ignore the seemingly small steps extremists are taking, in order to end a favorite American sport and tradition.

California Senate Bill 313 – A Ban on the Circus in California Had Broad Language Which Would Have Included Any Live Performances of Animals
Across the country in California, a senate bill that aims to ban all circuses in the state was proposed by one of the Humane Society of the United State’s Legislators of the Year, Ben Hueso. SB 313’s wording was originally broad enough to include any live performances of animals, which could have included rodeos, but was then amended to exclude them from the bill’s text.

Unfortunately, if passed, this bill could end live animal performances at venues such as SeaWorld or even your local zoo. These performances offer educational opportunities regarding the animals involved, which in turn promotes appreciation and conservation of the species. The performances also offer enrichment and exercise for the animals.

This type of legislation has been presented in nearly every state across the country and although this one doesn’t target rodeos specifically; it does target performing animals. Additionally, the next bill to be pushed forward could aim to ban rodeos completely.

A Life Without Animals? That’s the Goal of the Animal Extremist Agenda
It is not uncommon for circuses and rodeos to be lumped together by animal extremist organizations, as their ideology pushes for a world without human - animal interaction. They target performing animals because if they make any headway there, it allows for an easier path to ending animal ownership completely.
Since Facebook does not allow a post to be boosted with numerous links, visit this article on our website for a list of articles from across the country that outline instances in which animal performances have been targeted by animal extremists and organizations. Here are the titles:

Protect The Harvest is Standing Up for Performing Animals
One of Protect The Harvest’s main goals is educating the public about the real life of performance animals. We work diligently to fight for not only animal welfare, but the right for humans to own and exhibit these animals as well.