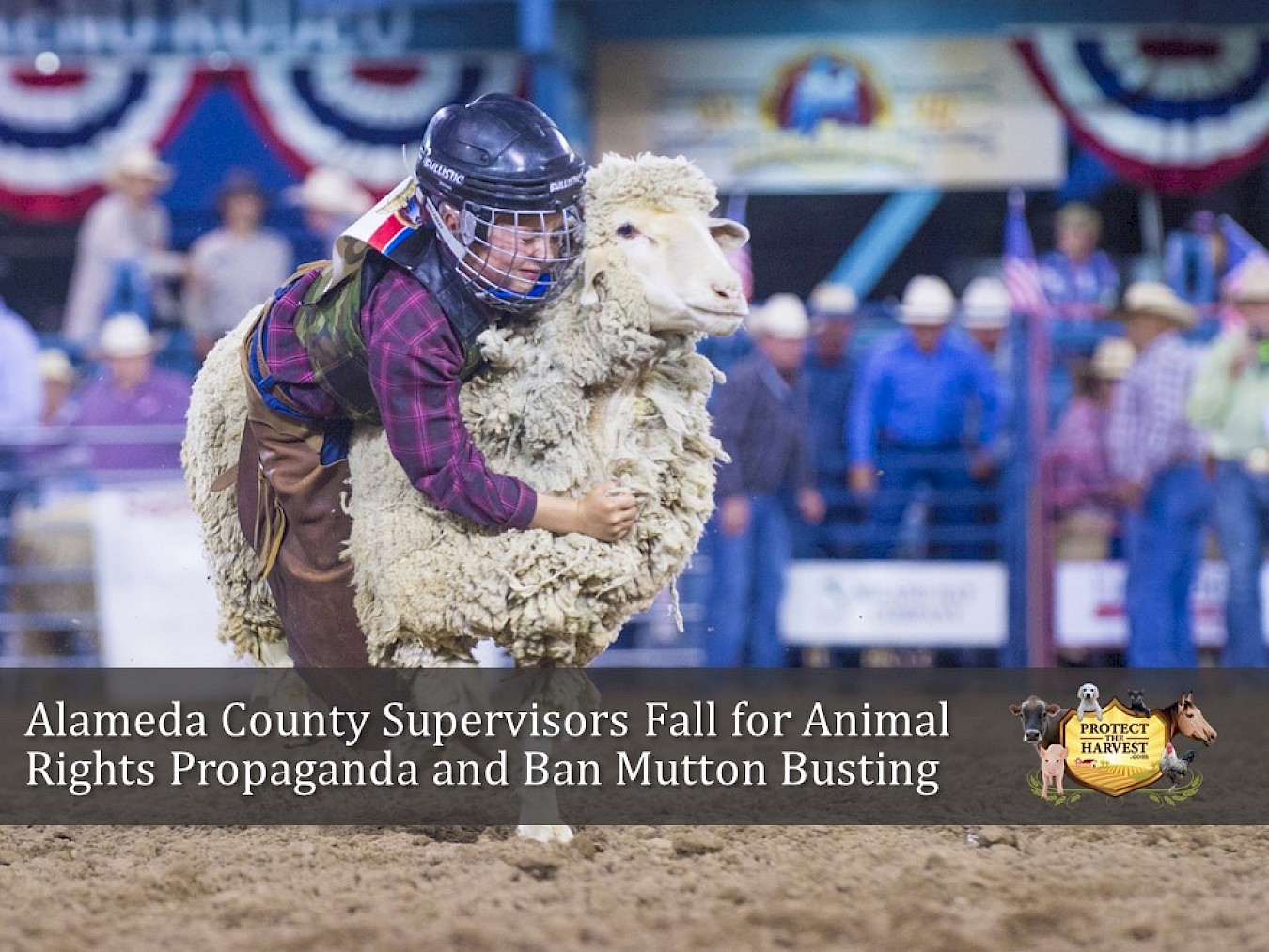 Board of Supervisors Votes to Ban Popular Children’s Rodeo Event

On October 29, 2019, the Alameda County (California) Board of Supervisors voted to ban the children’s rodeo event of sheep riding, or “mutton busting” in the county. Those opposing the ban were District 1 representative Scott Haggerty and District 4 representative Nate Miley. Voting in favor of the ban were District 2 representative and board president, Richard Valle; District 3 representative, Wilma Chan; and District 5 representative and board vice-president, Keith Carson. Those voting in favor of the ban have very little or no experience with animal agriculture. Valle stated that he voted for the ban because of the ASPCA’s position on rodeo events. It is important to note that the ASPCA is an organization that pushes the animal rights ideology. Animal rights and animal welfare are not one and the same.

Animal rights activists claim that mutton busting causes significant physical and mental trauma to sheep, even though the rides last literally only a few seconds and there is a weight limit for contestants. Ranchers who make their living with sheep provide the animals for the mutton busting, which is a crowd favorite. It stands to reason then, that if the sheep were traumatized in any way, those who raise them, understand them, and depend on their well-being for income would not put the animals in a potentially harmful situation.

Animal Rights Organization that Targets Rodeos Influenced the Alameda Board

A quick look at their Facebook page clearly shows that Oakland Action for Animals is a radical animal rights group that seeks to end rodeo and circuses. The business page is affiliated with other radical animal rights group pages like the HSUS, ASPCA, PETA, Animal Legal Defense Fund, Anti-Rodeo Action New Zealand and Animal Liberation Queensland. The group targets all rodeo events on their website through a “Bucking Tradition” movie and #RodeoIsNotRanching social media hashtag campaign. The group’s coordinator, Eric Mills attended an Alameda County Board meeting in early January, and referred to rodeo as “macho, bogus, sexist entertainment.” At the meeting, Mills showed the board members an animal rights video about rodeo and alleged abuse at Castro Valley’s Rowell Ranch Rodeo. Oakland Action for Animals is targeting all use of animals but as is typical for the animal rights movement, they pick the “low-hanging fruit,” like sheep riding first in order to set a precedent.

The issue of banning the long-time rodeo tradition of sheep riding first arose in early 2019. In January, the board voted to have an ordinance drafted to ban mutton busting, after being shown the videos produced by Mills and Oakland Action for Animals. Unfortunately, and as expected, the information presented to the board at the January meeting was ideologically driven and exceptionally one-sided. It is also interesting to note that there was only a 72 hour notice given and many of those now affected couldn’t make it to the meeting or were unaware of the agenda.

While Nate Miley initially voted in favor of drafting the ordinance, he changed his mind when presented with factual evidence from his constituents and the results of a state-wide survey regarding the event. Miley expressed at the board’s April 9th meeting that he felt the board should reconsider their direction on the matter.

The Agenda To Ban Rodeo Is Apparent

Miley voted against the ban at the October meeting, and was quoted in the Eastbay Citizen as saying: “I tend to err on the side of the folks who are involved in the industry. I’m not an expert. The agenda is to ban rodeos. Clearly, there’s an agenda and the agenda is pretty apparent.”

The ordinance will come back for a second reading in the next few weeks and go into effect 30 days after final approval. There is still time for people to make their voices heard on the matter. Alameda County Board of Supervisors can be contacted at the following numbers, or through their website at https://www.acgov.org/board/ .

Letters can be sent to the board at this address: