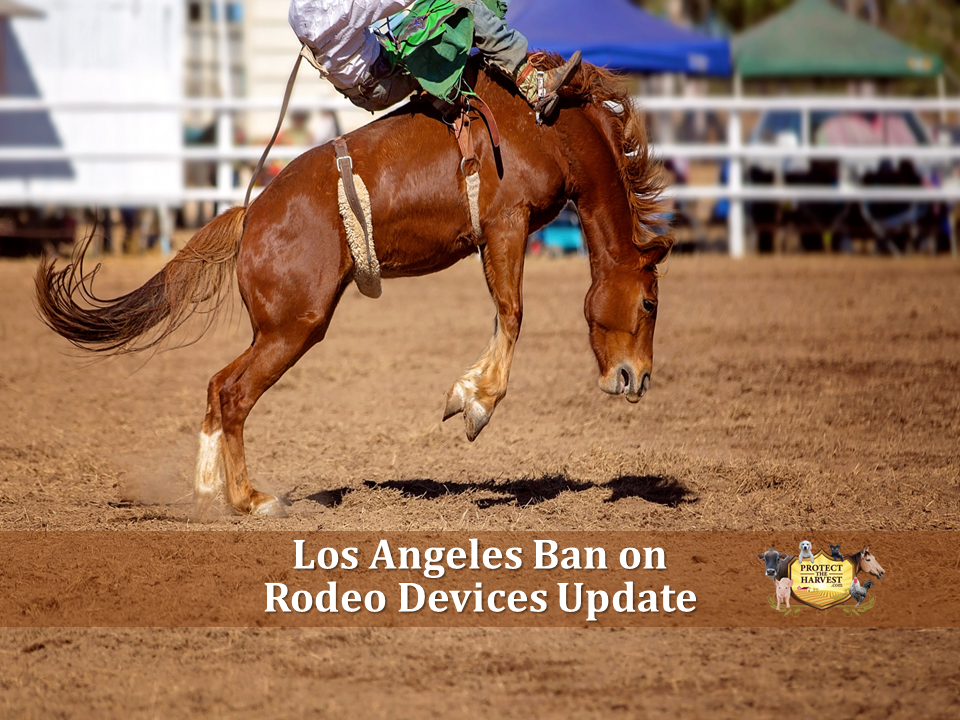 The Los Angeles City Council in 2020 presented a proposed ban on “Inhumane Implements” supposedly used in rodeo events. The motion was made by Council Member Bob Blumenfeld, a noted animal extremist member and seconded by Mitch O’Farrell, another animal extremist. Their misguided proposal, supported by a Community Impact Statement by the Eagle Rock Neighborhood Council, requests that the City Attorney prepare and present an ordinance that would prohibit electric prods or shocking devices, flank or bucking straps, wire tiedowns and sharpened or fixed spurs or rowels at all rodeo or rodeo related events, in the City of Los Angeles, and to model it after the City of Pittsburgh’s 1992 ordinance banning the above implements.

As we have written previously, there is more behind this proposed ban than the “concern for rodeo animals.” The fact that the Pittsburgh language was used is even more worrisome as it states:

“635.04 No rodeo or rodeo related event shall be permitted in which animals are induced or encouraged to perform through the use of any practice or technique, or any chemical, mechanical, electrical or manual device that will cause, or is likely to cause physical injury, torment or suffering. The following devices are specifically prohibited at all events: electric prods or shocking devices, flank or bucking straps, wire tie-downs, and sharpened or fixed spurs or rowels.”

Comments Regarding the Proposed Motion

Perusing the comments by citizens it is overwhelmingly apparent that the movement is being pushed by a small minority of animal extremists. Those who bothered to write a comment chose catchphrases and “canned” responses.

Those who opposed the ban, however, tended to speak from the heart, using their experiences with their horses, rodeo experiences, and how it helped mold them. A comment from a 9-year-old girl stating she got up every morning at 6:30am to feed the horses, even before she ate and a letter from a group of 27 veterinarians who went into detail with how well the animals were cared for were just two of hundreds of comments perused that were pro rodeo.

Some comments spoke specifically about the Bill Pickett Invitational Rodeo and how it was important to see the historical importance of black cowboys.

As of 2/11/2021, the proposed ordinance is Pending in Committee of the Personnel, Audits, and Animal Welfare Committee and has not progressed, however the City Attorney did add even more restrictive language.

Overreach by the City Council

In April, 2022, a Community Impact Statement from the Sunland-Tujunga Neighborhood Council was entered into the record and this statement is eye-opening to say the least.

In 2009, the Los Angeles Equine Advisory Committee (LAEAC), under the recommendation of City Council Persons Wendy Greuel and Tom LaBonge, was established. This Committee is comprised of a representative from each council district and the mayor and the committee represents members of all equestrian disciplines in the industry, a veterinarian, legal advisors, everyday and professional riders and competitors. With such a broad spectrum of equestrians, it is very concerning that the City Council did not include LAEAC in their deliberations to push the Rodeo Ban motion forward.

In the impact statement, the LAEAC states that it had only become aware of the motion to ban rodeo because of a news headline from a local Professional Bull Riders event titled “Cowboys injured -4, Bulls Injured -0.”

The LAEAC reminded the City Council that in Los Angeles City and County there are over 90,000 horses and that they are an important part of the local economy.

LAEAC’s statement also presented fact-based information about rodeo and its animal athletes, that their care is superb, they are not abused and they represent an important part of Los Angeles’ heritage.

LAEAC also requested that the City Council includes their “representation in planning, meetings, or other activities which will impact equestrian use and equine keeping, including discussion and movement on this (rodeo ban) motion should it be brought to City Council for a vote.”

Western Heritage and Future Equestrian Use

LAEAC furthermore stated that “we in the west value our Equestrian Heritage. We value the horses and bulls and cattle that we compete on and with.”

Because LAEAC has such a wide representation of all equestrian disciplines, they see the big picture- ban rodeo and youth gymkhanas today and tomorrow, every other equestrian event can be banned. This is important since Los Angeles is the host of the 2028 Olympics which has a number of equestrian events.

Los Angeles and California were built by the charros and charras, cowboys and cowgirls and that culture is still prevalent in charreadas (Mexican Rodeo) and rodeos. Stopping rodeo can be seen as an attempt to cancel that historical and cultural sector of the rich history that is Los Angeles.

It’s unconscionable that such a minute sector can have such a negative impact on historical and cultural events, traditions, and celebrations.

Protect The Harvest has joined with Western Sports Industry Coalition, a group comprised of 31 organizations representing rodeo professionals, equestrians, sports organizations, and cultural institutions. This coalition was formed to be a collective voice to present knowledge, facts, experience and legitimate, objective research to lawmakers to preserve and protect the future of Western sports events and tradition and to substantiate the industry’s commitment to the welfare of animals.

Sign the petition to Save Rodeo in Los Angeles HERE

All Rodeo Article Links can be found HERE