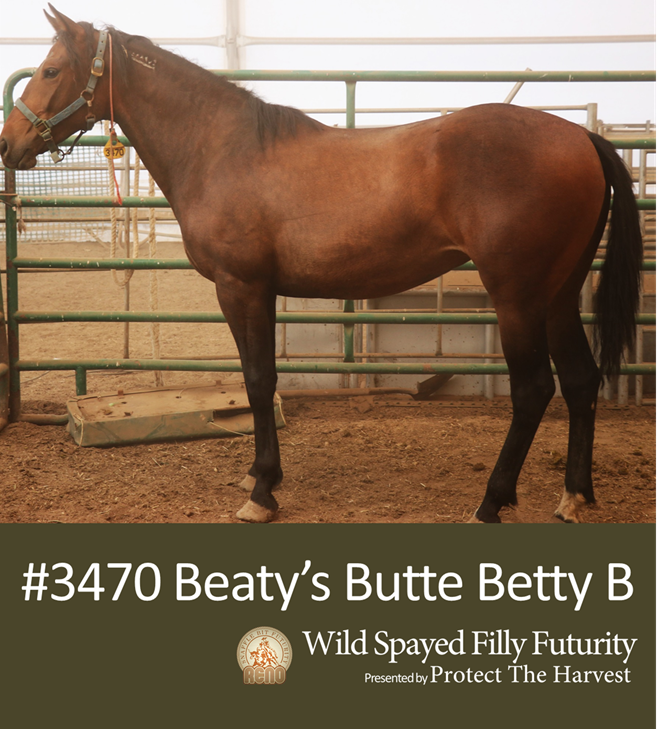 Beaty’s Butte Betty B was purchased at the Reno Snaffle Bit Futurity and is in training with Kirk Ferris of Ferris Performance Horses. At home, Kirk calls her Betty and they are planning to show at the 2018 Wild Spayed Filly Futurity in Reno, Nevada next year. If you would like to learn more about the competition and the events, click here: Wild Spayed Filly Event Overview

Kirk Ferris of Ferris Performance Horses started riding with his parents at a young age. His father, Jack Ferris, taught him the basics of horsemanship and as he grew older, Kirk began to learn the finer points of showmanship. Kirk began competing in Cutting competitions on the west coast at 13 years old. At the young age of 16, he won the 1996 Pacific Coast Cutting Horse Association (PCCHA) Non-Pro Futurity Championship. He also won the PCCHA Non-Pro Derby in 2004 which was held in his hometown of Reno, NV.

Kirk transitioned into the reined cowhorse industry in 2016 with Flint Lee of Fallon, NV. During that same year, Kirk started his first mustang for the Reno Extreme Mustang Makeover. He and the mustang, named “Judd the Wonder Stang”, bonded strongly and ended up Reserve Champions in the event. At the beginning of 2017, Kirk found himself under the tutelage of Mike Boyle of Boyle Ranch, where he gained experience with reining horses and started Mike’s 2015 foal crop.

Kirk is now based out of Amazing Grace Ranch, in Dixon, California, home of the Tomcat Chex. There, he has been focusing on mostly starting 2 year olds while gaining his clientele for the show season. Kirk believes that, “The first 30-90 days is the most important”.

He hopes that the experience he has with the Mustang Makeover and his attention to the foundation of the horse will allow him and Beaty’s Butte Betty B to win the 2018 Wild Spayed Filly Futurity!

Matt Zimmerman was raised on a large cattle ranch in central Nevada. His family rode mostly ranch bred Quarter Horses to gather, doctor and sort cattle. The 3.5 million acres that his family ran cattle on is shared by wild horses. Matt remembers fondly seeing horses on the rangelands as they trailed cattle.

"THE SKY IS THE LIMIT"

Matt and his wife Stacie train together at their facility, Zimmerman Horse Training, in Caldwell, Idaho. The Zimmerman’s program focuses on a building a solid foundation. Matt feels strongly that once a good foundation is laid, “the sky is the limit” for his horses. He also believes that trust between him and the horse has been the key to his success.

Progress Updates:
Check back in with us periodically to follow the progress of the wild spayed fillies.
We will be updating their webpages and will be posting more information on the Reno Snaffle Bit Futurity Facebook page as well as our YouTube Channel.