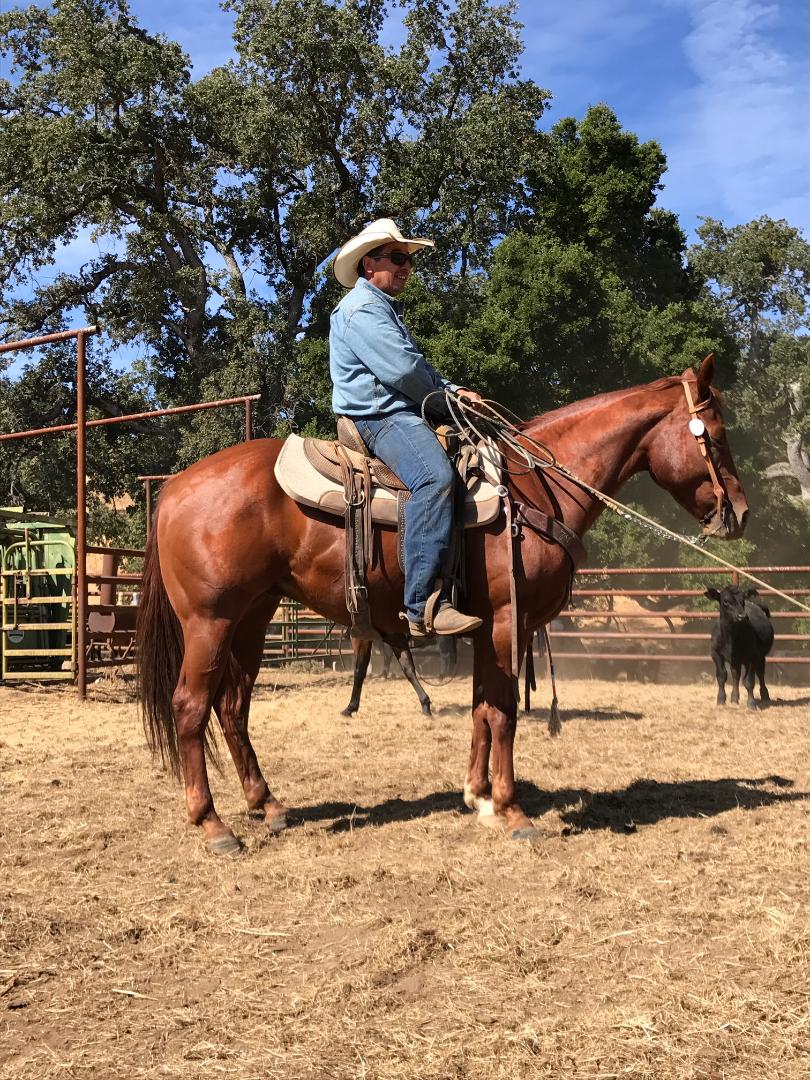 Hot Toddy was purchased at the Reno Snaffle Bit Futurity and is now in training with Carlos Silva, Ranch Manager of Simon Newman Ranch in Newman, CA. At home, Carlos calls her Toddy and they are planning to show at the 2020 Wild Spayed Filly Futurity in Reno, Nevada next year. If you would like to learn more about the competition and the events, click HERE.

Carlos Silva was born in Chile 40 years ago and in his words “was born in the saddle”. His family had a ranch there and the only transportation was on horseback. His earliest memory of being on a horse was when he was about 2-3 years old with his mom. He came to the USA when he was 24 years old and moved to Cedarville, CA where he worked with and broke wild mustangs both in CA and NV.

Currently, Carlos is Ranch Manager of Simon Newman Ranch in Newman, CA which sits on 50,000 acres. They run steer for the stockyards there so having a horse (or a 4 wheeler) is a necessity. He competes in ranch sorting and team penning when he has free time, which isn’t a lot. Since his upbringing in Chile, the biggest influence and help to him nowadays has been his girlfriend, Kylee, with whom he trains horses.

Carlos, Kylee, and their friends went to Reno to see the 2019 Wild Spayed Filly Futurity and got interested in the program. Having worked with wild mustangs, he saw first hand how their numbers are negatively impacting the ecosystem. With the encouragement of Kylee and his friends, he decided to purchase a spayed filly. He likes the idea of them being spayed as it makes them more like a gelding in temperament.

Carlos purchased Hot Toddy because he liked her looks, and her “wild girl” attitude. He’s currently working on teaching her to load and unload, doing round pen work and groundwork. He hopes that she’ll become the horse he envisions as he “needs a lot of horses” for his job on the ranch. He said that Kylee will be his biggest help because he is not familiar with NRCHA rules, but he’s comfortable with the cow work due to his daily life. Carlos plans to keep Hot Toddy as his own horse if she does well in training.