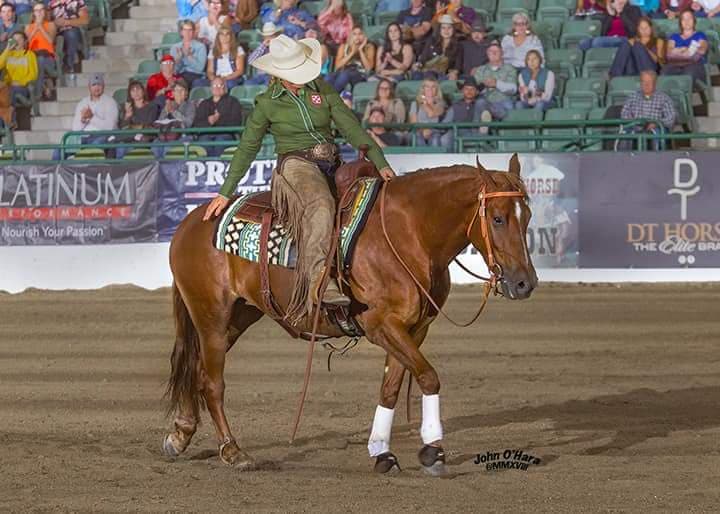 Ginger Snap was purchased at the Reno Snaffle Bit Futurity and is now in training with Bobbi Hall of Coat Hanger Cow Horses. At home, Bobbi calls her Ginger and they are planning to show at the 2020 Wild Spayed Filly Futurity in Reno, Nevada next year. If you would like to learn more about the competition and the events, click HERE.

Bobbi Hall began riding at an early age, and in high school she trained in Dressage. In 1995, she started her own barn and competed in local shows. Bobbi began her training career with the goal to create “nice, broke, cow horses”, often these horses would go on to Ranch Sorting, Team Penning, or Reined Cow Horse events. She currently trains full-time out of Skyhawk Ranch in Redmond, Oregon. At this time, her program is still geared towards producing broke cow horses, but she’s focusing on Versatility Ranch Horse (VRH) and Reined Cow Horse events specifically. Some of her notable accomplishments include: winning the 2012 Oregon Foundation Quarter Horse Club’s Supreme Cowhorse Champion and Reserve Champion in the same year.

Bobbi participated in our inaugural Wild Spayed Filly Futurity event in 2018, with Three Fingers Fox in the Rocks and placed 4th overall! Bobbi explains that she decided to participate in the program initially because of the challenge it posed: training a wild horse in all three reined cowhorse events in only a year’s time. Now, in her second year competing in the WSFF, she says she wanted to support the cause of educating the public about wild horses and utilizing spaying as a way to manage their numbers. Beyond that, she felt it was important to support Protect The Harvest. Although this is only her second time competing in our Wild Spayed Filly Futurity program, this is her third time competing in Reno with a mustang. Bobbi competed in 2006 at the NRCHA Snaffle Bit Futurity on a Kiger mustang!

Keep an eye out for Bobbi and Ginger Snap at the 2020 Wild Spayed Filly Futurity in Reno, Nevada September, 2020.