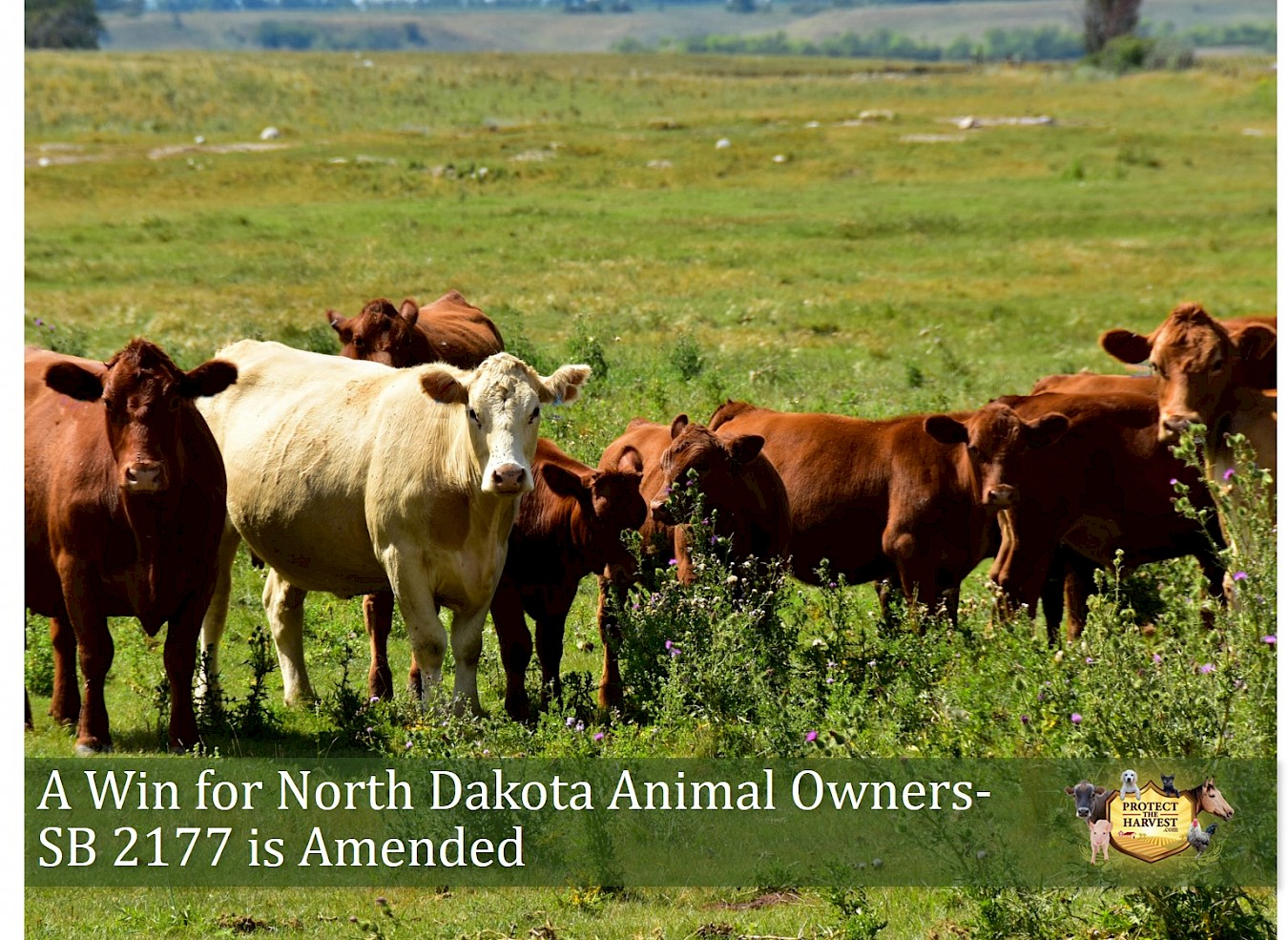 A WIN FOR NORTH DAKOTA ANIMAL OWNERS - SB2177 IS AMENDED

A big win for North Dakota residents, Senate bill 2177 was written to combat a great injustice inserted into its Century Code behind closed doors. SB 2177 amends articles 36-21.2-05 and 36-21.2-06 regarding animal seizures. This bill passed without a single opposing vote and it shows a state that is willing to stand up for its residents and their property rights.

This vague and uncertain language within the two articles made it into the code with much help from the Humane Society of the United States and the Humane Society Legislative Fund. They introduced Measure 5 in 2012, which was a state statute that was voted down by the citizens of North Dakota. However, instead of dropping the matter, HSUS amended the bill and got it pushed through in 2013.

Prior to this amendment, the Century Code stated the following:

36-21.2-05. Seizure of animal - Court order.
1. A law enforcement officer may petition the court for an order directing the seizure of any animal believed to have been neglected, abused, treated cruelly, or subjected to any act or omission in violation of this chapter. 2. The court may act without notice to the animal’s owner or to the person having custody or control of the animal and may rely solely on testimony or an affidavit in considering the petition. 3. In the order for seizure, the court may direct that a veterinarian humanely destroy an animal if the veterinarian, upon examining the animal, determines that the animal is experiencing excruciating pain or suffering and that the animal’s pain or suffering is not likely to be alleviated using reasonable medical interventions.

This verbiage would make it very easy for law enforcement and veterinarians in the state to seize animals even when it was unnecessary. Adding to this unconstitutional process, a significant amount of the law enforcement personnel in the state of North Dakota were trained by the HSUS regarding the seizure of animals. Paired with a veterinarian that is pro-animal rights and has a personal vendetta, the combination results in tragedy for the animal owner. This scenario has happened to several animal owners in North Dakota.

Senate Bill 2177 has amended the verbiage that the HSUS snuck in. It now states:
36-21.2-05. Seizure of animal - Court order.
1. A law enforcement officer, upon a recommendation from a licensed veterinarian approved by the board of animal health, may petition the court for an order directing the seizure of any animal believed to have been neglected, abused, treated cruelly, or subjected to any act or omission in violation of this chapter. If the animal to be seized is a bovine animal, horse, or mule, the law enforcement officer shall provide a copy of the petition to the chief brand inspector. The chief brand inspector shall conduct an ownership inspection of the animal as provided under section 36-21.2-06.

You may be wondering what a “chief brand inspector” is. This person is either a peace officer or a person that has completed the state law enforcement course. This person is also knowledgeable about the livestock industry and brand inspection. Having both of these requirements helps insure that livestock is not being seized unless absolutely necessary.
Another section amended by this bill is 36-21.2-06, which now requires a reasonable inquiry to be done to find the owner of the animal before seizure. It also allows the animal owner to request a hearing in court before a final ruling on the disposition of the animal. This allows the animal owner the right to due process before property is seized from them.

Prepare for What is to Come

This bill is a step in the right direction for North Dakota residents, but they should not let their guard down. The HSUS and other animal rights groups will not stop just because one bill passed that reverses their work. They are pushing their agenda tirelessly to do what they can to end animal agriculture and all animal ownership. We too must work diligently to defend the property rights that are the backbone of this country.
North Dakota is probably the last place people would think animal rights ideologues would try to get a foothold. They knew this. The HSUS has bragged about how they are employing polling tactics to identify vulnerable areas where they can sneak in without much notice. In North Dakota, while the people voted down Measure 5, animal rights ideologues were at the back door, waiting to sneak in.
This is exactly why we all need to be aware of state legislation and the ramifications it can have on our personal lives.

Prev Article
Valley Oaks Steak Company: When Doing It Right Still Means You Are Under Fire
Next Article
JUST Up Hampton Creek Without A Paddle