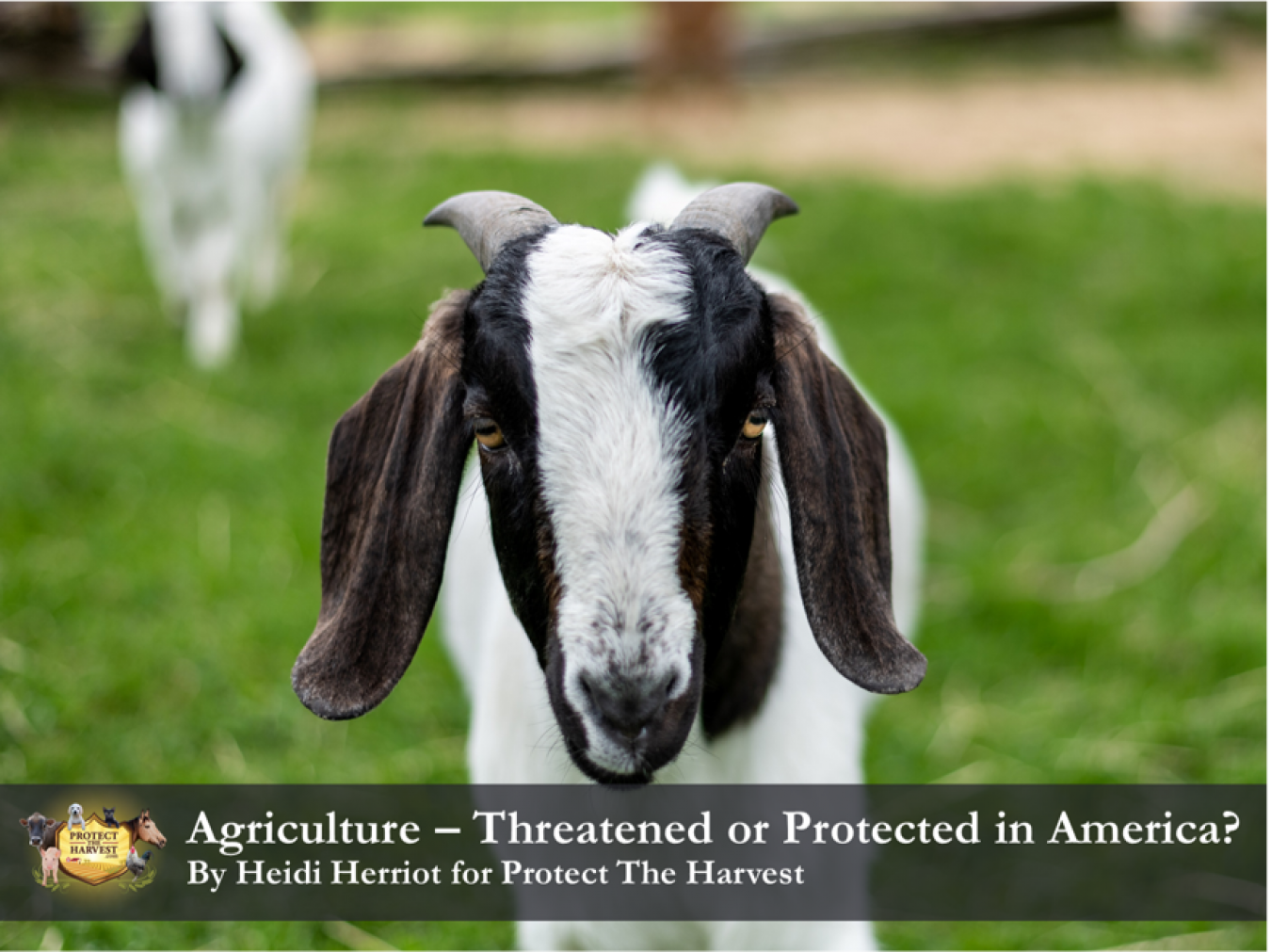 AGRICULTURE - THREATENED OR PROTECTED IN AMERICA BY COMPREHENSIVE PLANS

By Heidi Herriot for Protect the Harvest

Is agriculture threatened or protected in America? Angel Cushing, a goat farmer in Lyon County, Kansas would argue that agriculture is being threatened by a group that is supposed to protect it. The issue is a Joint Comprehensive Plan (PlanELC) between the county and city of Emporia (the county seat). In a letter from the commissioners, they state that the “PlanELC is about improving the quality of life for every member of the community...” It is also interesting to note that a main goal stated within the detailed plan is to “preserve agricultural landscapes.”

Cushing has been working tirelessly to inform Lyon County residents of the joint PlanELC and how she believes it will affect farmers and landowners. She spent numerous hours researching property rights and speaking with subject matter experts because this was the first time she had engaged in an issue like this before. One significant concern was that the company hired to create the plan, and some of the city commissioners from Emporia, have a very different view of what Lyon County should look like now and in the future.

An Urban Collaborative is Making Plans for Rural Kansas

Lyon County citizens have a sound reason to be alarmed. The Urban Collaborative (UC), the company that was hired to create the plan, is based in Portland, Oregon. While the group has an impressive record of creating master plans for the federal government, it seems like an odd choice for rural Kansas. Statements on their website are reason for pause as well as they use terms such as: “environmentally, economically, and socially sustainable”, “advancing sustainability”, and “design and development of streets, parks, buildings, and cities in an ethical and sustainable way.”

The UC Program Director, Zoe Anton, is also the Vice President of a Craft Crickets. Her bio on the company’s website outlines her goal of running a cricket operation in Kansas. Anton’s LinkedIn profile states the following regarding cricket farming, “...the most environmentally low-impact and nutritious sources of protein available… I continue to lecture on sustainable business practices and a more resilient food supply chain.”
“Sustainable farming” has been a term used by farmers for generations and only recently was hijacked by those against modern farming practices. This term is now often used by people who are trying to push an agenda to remove animal proteins from our diets. This initiative is not based on science, but instead is based on the animal rights ideology.

A Petition to Voice Concerns over Joint PlanELC

Angel Cushing and hundreds of Lyon County residents created a petition voicing their concerns about the Joint PlanELC. Cushing believes the real motivation for the Joint PlanELC is, “to gain public use of private property, move away from livestock production, move people out of the country into designated areas, and reduced mechanized vehicles; while expanding energy production and tourism.” The petition is primarily calling for a paper ballot to allow rural citizens to be heard. Their main concerned is that the plan “changes all of unincorporated Lyon County to subdivision law under the city of Emporia.”
Cushing believes the language in the plan discriminates against people with less than 40 acres. She also had a major concern with a previous goal of the plan, which was to use private property for public trails. Amendments were made regarding this issue in mid-March, but she still feels the overall language is “vague and contradicting.” She also sees an issue with zoning regulation 9.5.2, which could encourage animal extremist groups to sue small farms.

Ignoring the Fox in the Henhouse

Our rural American way of life is under attack by those who think they have a better plan. They look to impose their ‘sustainable’ and ‘ethical’ practices on all of us, when farmers and ranchers invented the concepts in the first place. Inviting an outside organization into your community to create plan for land use and impose their utopian philosophy might be akin to allowing the fox to guard the hen house.
While Cushing remains committed to emphasizing the issues stated in the petition, there are some commissioners, and even a few farmers, who are accepting of this plan. They believe the Kansas statute that exempts agriculture from such regulations will suffice. According to Kansas Livestock Association (KLA) attorney Aaron Popelka, who weighed in on the original plan draft, there is indeed a statute in Kansas that would exempt agriculture. K.S.A. 19-2921 generally prohibits counties from zoning agricultural land or buildings in the unincorporated areas of the county. The concern is that KSA 19-2921 applies to parcels of forty or more acres. Popelka pointed out that the first draft of the ELC Plan the KLA read was noncompliant with the statute and the subsequent plan has since been corrected to reflect the statute and an agriculture exemption. Cushing and her husband are goat farmers but own less than forty acres. She believes this will allow anyone to be entitled to decide if their farm meets the agriculture threshold.

Master or comprehensive land use plans are not new ideas. There is evidence from as early as the 1920’s of visionary leaders ensuring the future of communities and land across the USA and beyond by encouraging and undertaking master planning. Many of these plans indicated that a primary directive was to “preserve agricultural land.” There are strong indicators that master land use plans created for the preservation of agricultural land are critical to our food supply. A disturbing statistic from the Farms Under Threat website states that, “from 2001-2016, 11 million acres of agricultural land were paved over, fragmented, or converted to uses that jeopardize agriculture, curtailing sustainable food production, economic opportunities, and the environmental benefits afforded by well-managed farmland and ranchland… this loss over the course of ‘less than one generation’ included…land best suited for intensive crop production.”

Other counties in Kansas have pursued comprehensive plans, but in a different manner. Jay Leipzig, Johnson County Planning Director, noted that their county, which includes Kansas City, is remarkably diverse and has telecommunications and consumer products industries including Garmin, Sprint, and Dupont. To top it off they also have a boom in population growth. Their goal is to balance the interests of agricultural land with the ongoing development. To ensure this, the county created a committee of stakeholders from the area who drafted the Rural Comprehensive Plan for the county, which was adopted by a resolution in 2017.

Nancy Hier, Wabaunsee County Commissioner, rancher, and business owner was part of the steering committee that updated their county’s Comprehensive Plan. The plan was funded by a grant from the US Economic Development Agency and matching funds from the county. Like Johnson County, they created a group of community stakeholders to steer the plan, remain mindful of areas of opportunities, and deal with challenges. Their agricultural community led the conversation, but they also considered issues like affordable senior care and housing.

Other States Are Creating Master - Comprehensive Land Use Plans

Beyond the Kansas borders, there are many states that require counties and municipalities to create master/comprehensive land use plans. These include Florida, Virginia, Pennsylvania, and most western states such as California, Oregon, Nevada, Arizona, and several more. The American Planning Association, which tracks this information and serves as a resource, notes that these plans not only address future land use, but also urban sprawl, and critical areas including hazard mitigation, and natural disaster planning.
While future planning can be required, and would seem to be a positive direction, it is imperative that we keep our eye on this. Angel Cushing and many others believe one of the biggest agenda items is a push to eliminate livestock. Bill Gates, one of the largest land owners in the US, is very vocal on this subject and wants to eliminate livestock and stated, “I do think all rich countries should move to 100% synthetic beef.”

One Plan Does Not Fit All

For Lyon County, it seems one of their biggest challenges is the distribution of population. The 2019 population for the county was 36,000 and more than 24,000 (65%) of those residents are in the city limits of Emporia. This creates obvious challenges for the community as a whole. It appears the community leaders felt the best option was to combine these areas into the one joint plan. While it makes sense to consider each area individually and create some harmony between the two, Cushing and others argue they should not be implemented in one single plan.

What Difference Can I Make?

There are a few takeaways from this issue. Lyon County should have done a better job of truly engaging and listening to rural residents. One might also wonder why they did not consider utilizing a Kansas planning company which would have benefited both the residents and the local business. At the very least, they could have discussed creating a dedicated team of community stakeholders for a steering committee. This type of committee could intimately understand the demographics, residents, challenges, and strengths of the community.

We urge all of our readers to stay informed of local and state plans and regulations. Learn more about getting involved in your local committees and local government. Find out when the next county commissioner meeting is or city council meeting. Even attending school board meetings can greatly help your community.

As for Angel Cushing, she is going to keep fighting for her rights and her way of life.

She maintains, “I am not giving up, no matter the cost. I will not relinquish my property or my property rights. Just when I feel defeated, I am introduced to one more person who wants to help, with one more idea to try.”