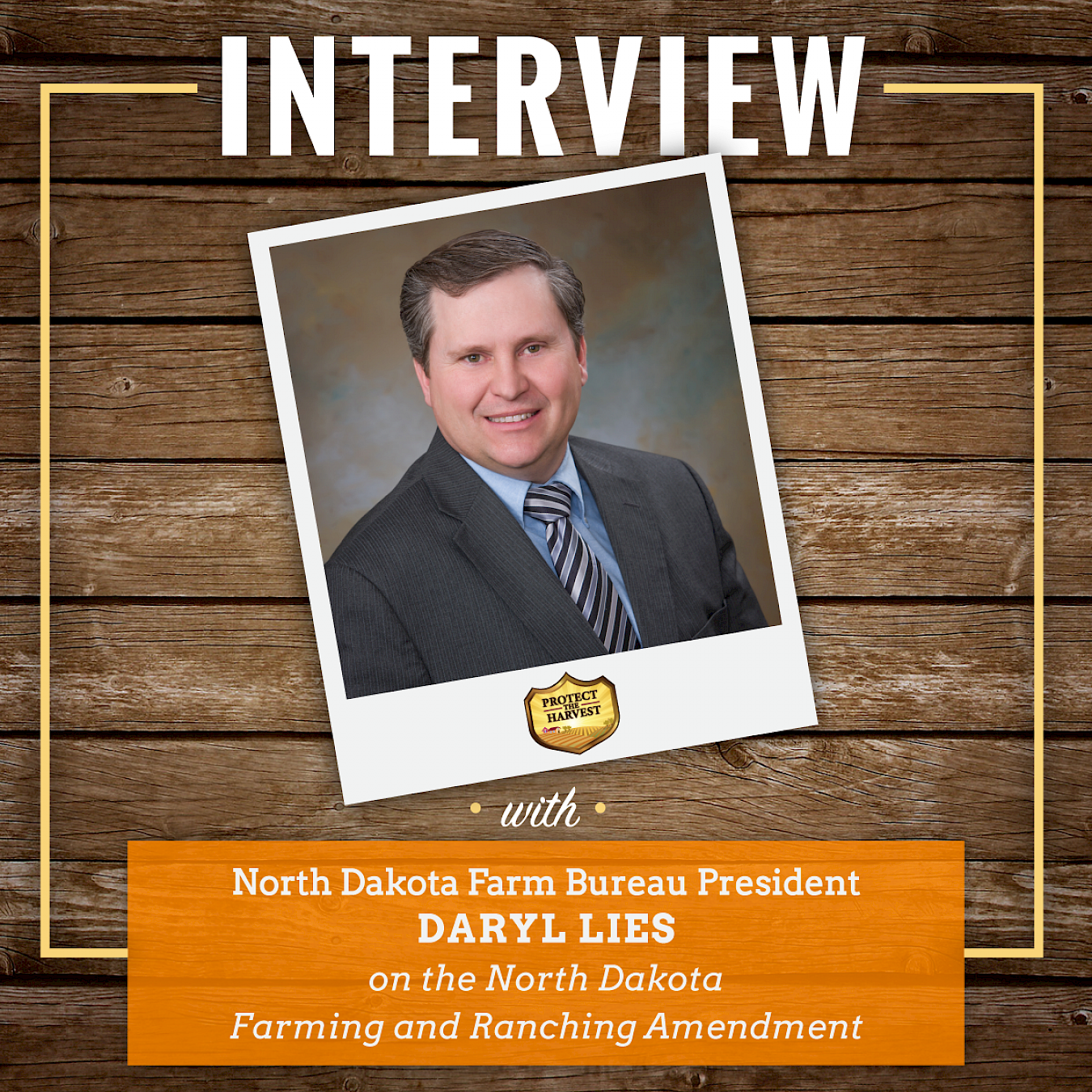 Farming rights amendments are a relatively fresh idea in the agricultural legislative landscape. Following years of attacks from special interest groups (Humane Society of the United States in particular), agriculture supporters became determined to fight back. North Dakota was the first state to introduce, and ultimately enact, one of these measures. In 2011, an initiative was filed with the state. After approval and petition circulation, Measure 3 headed to the voters in November of 2012. It passed overwhelmingly by a margin of 2 to 1 (67% to 33%). By amending the state constitution to forever guarantee the right to farm and ranch, North Dakotans ensured that farmers, ranchers, and consumers would all be protected from unnecessary and overreaching regulations. We recently interviewed North Dakota Farm Bureau President Daryl Lies to discuss the importance of protecting farming and ranching and the advice he would give to other states considering similar amendments. Luckily, North Dakota's amendment being in place means that there have been no significant challenges to the protection of farming and ranching in the state since 2012 - an impact that is immeasurable, but a good sign for the future. North Dakota has over 39 million acres of farmland (90% of its total land area), close to 32,000 farms, and the motto "Strength from the Soil" even appears on the state's coat of arms. Is it safe to say agriculture is a key to North Dakota's success as a state? Farming and ranching are the foundation and cornerstone to North Dakota’s way of life and economic success. We are fortunate to be a state rich in natural resources not limited to agriculture, but also energy. Having said that, the resources managed by farmers and ranchers are the backbone of who we are as a state! What was the background in North Dakota leading up to the introduction of the Right to Farm Amendment? Leading up to NDFB carrying out our mission to protect farming and ranching with the Right to Farm Amendment, we had observed attempts to interrupt production and efficiencies available to produce food for an ever-growing population in our country and the world. These overreaches are happening across our nation and somewhat within our state by groups unfriendly toward agriculture. These groups also have no practical, hands-on agricultural experience. Because these situations are becoming more common, we knew it was upon us to give constitutional protection to agriculture. If we did not do it, chances are nobody would. Was the campaign to promote it to voters challenging in any way? The process we followed to promote and gain support of North Dakotans was very rewarding. Being able to visit with people face to face about the issues was worthwhile and helped gain the buy-in of voters long before the general election. In fact, it created an atmosphere in which folks we visited with would bring others to us and hear our message. We don’t want to mislead anyone. It was a lot of work, but it was worth every moment! Now that there is a 3+ year window between its ratification and today, what would you say is the biggest impact the amendment has made to North Dakota? Measuring the impact of our Right to Farm amendment since its passage is hard since there has not been a challenge or a need to invoke it in the protection of anyone so far. Do you see it as a positive for future generations of farmers and ranchers? We vetted this thoroughly before we forged ahead and this will be extremely positive for future generations of farmers and ranchers. Following North Dakota's precedent, Missouri has approved its own Right to Farm Amendment, Oklahoma will be voting on one in November, and the Nebraska legislature is currently considering one as well. What advice would you give to states that are considering such amendments? The first words of advice we would have to other states wanting to implement Right to Farm language would be to keep the wording short and concise. Make sure not to add any wording which may be restrictive or undo previous legislation which is beneficial to farming and ranching. We also advise other states looking to protect modern farming and ranching practices to engage voters through face to face visits. You cannot replace the trust which can be gained with personal exchange of words directly from a farmer or rancher.