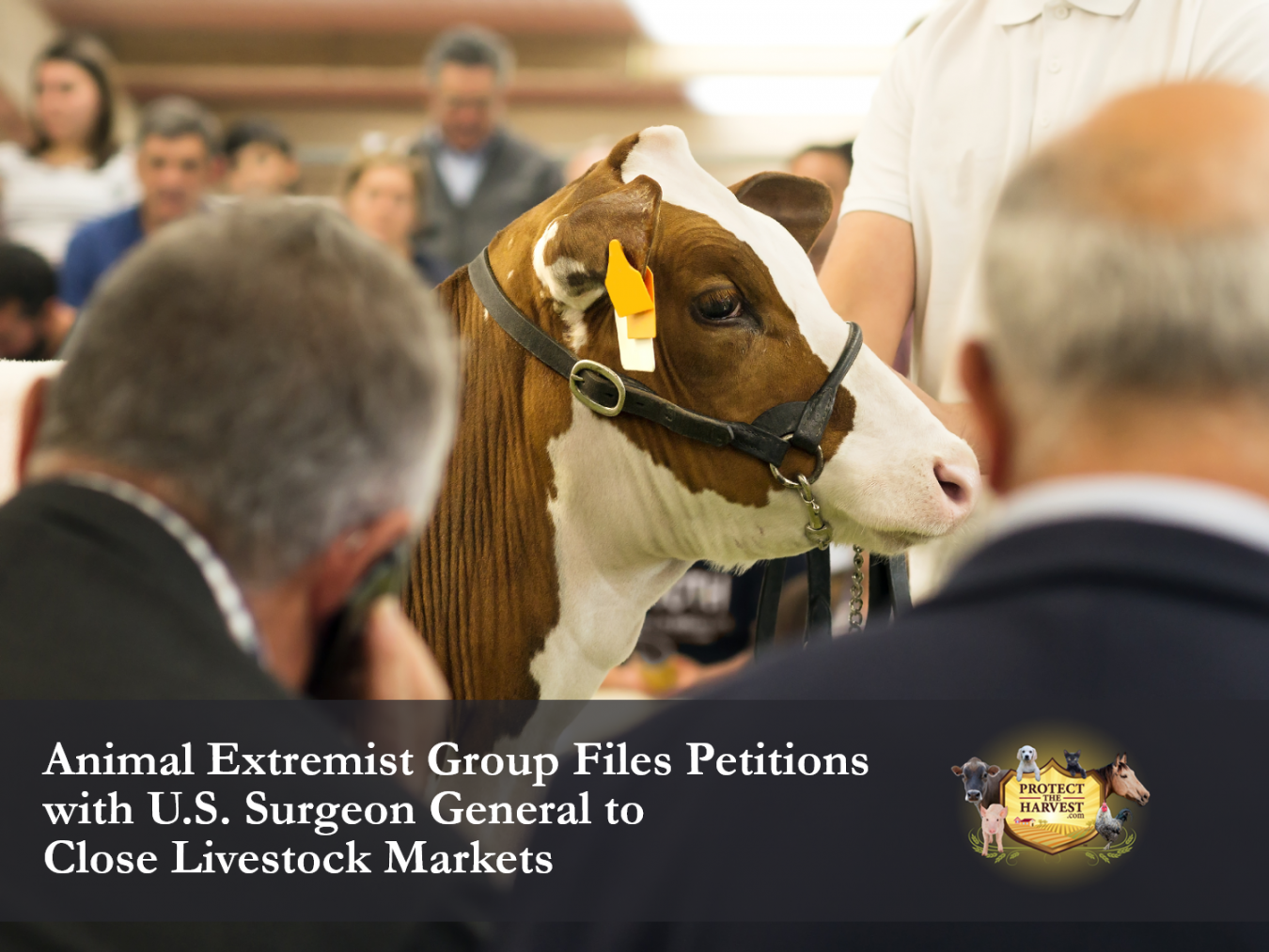 The COVID-19 pandemic has brought worldwide turmoil and a broad spectrum of problems, from the physical effects the virus itself can have, to the financial struggles of millions - unemployed by widespread shutdowns. Add to this the unscrupulous animal extremist groups that are attempting to further their agenda in the wake of this pandemic. Many American families struggle to keep food on their tables as they face unemployment and the reality of a greatly disrupted national food supply chain. One particular group, the Physicians Committee for Responsible Medicine (PCRM), is actively seeking to exacerbate food insecurity in the United States by petitioning lawmakers to close live animal markets as well as meat processing plants.

On April 7, 2020, the group filed a legal petition for rulemaking with the U.S. Surgeon General to demand that all live animal markets in the United States be shut down immediately. Due to the role played by the Wuhan, China Huanan Seafood Wholesale Market in spreading the virus, PCRM makes the false claim that any type of animal market has the potential to spread COVID-19 from animals to humans.
In addition, the group is petitioning President Trump to rescind his order for United States meat processing plants to remain open. PCRM’s shameless maneuvering during a time when Americans are already suffering from loss of income and shortages of essential goods demonstrates the group’s incredible disconnect from reality, disregard for the true well-being of the population, and degree of extremist zealotry.
With numerous meat packing plants closed or greatly limited due to a shortage of workers caused by COVID-19, America is getting a painful glimpse of what even a partial shutdown of the meat industry means for the public—sparsely stocked meat cases at the grocery store.

Meanwhile, for some sectors of the animal agriculture industry, even a limited number of closed plants have forced the euphemistically phrased “depopulation” of surplus animals—thousands of healthy, finished meat animals wastefully destroyed for lack of somewhere to send them to be processed into meat and byproducts, and no other options to house them.
If PCRM had its way, this situation would overtake all of animal agriculture in the name of COVID-19, and result in the entirely wasteful deaths of literally millions of animals that would otherwise become part of the nation’s food and product supply chain. The effects of such a grim and needless scenario would spread far beyond the direct ruin of producers. The food industry would be far from the only one affected, since byproducts of meat production are essential components in countless everyday items used by virtually every person in the United States.

PCRM willfully turns a blind eye to the vital role that livestock production plays in the overall food cycle. For example, livestock can graze and thrive in areas that cannot be used to grow crops. Livestock can also utilize byproducts of crop production and other food waste that are unconsumable for humans. In addition, manure from cattle feedlots is used to fertilize crop fields that grow grains and vegetables.
Platform of Fallacies
Even in normal times and in the extremely unlikely scenario that the entire general populace would convert to veganism, it would be impossible to sustainably and efficiently produce the sheer amount of plant products to feed and adequately nourish one nation, much less the world.
It is easy to see how PCRM’s entire platform is based upon fallacies – fallacies that are necessary for them to dupe people into supporting their agenda.
Given the group’s long history of ill-veiled deceptions, though, it’s really no surprise.

Physicians Committee for Responsible Medicine was founded in 1985 by Neal Barnard. Barnard wrote 18 books between 1990 and 2020, and in 2015 founded the Barnard Medical Center as part of PCRM. He was nominated for induction into the “Animal Rights Hall of Fame” in 2003. Barnard’s training was in psychiatry, but he has spent the majority of his career masquerading as an expert in nutrition, promoting strict veganism and denigrating the use of animal products and animals in medicine and research. This has all been under the guise of advocating for human health. His namesake clinic adheres to the animal extremist ideology, irresponsibly “treating” patients with veganism as blanket cure for all manner of diseases and conditions.

Less than 7% of PRCM Members are Actual Physicians

PCRM’s name itself, the Physicians Committee for Responsible Medicine, is very blatantly and intentionally misleading. Currently less than 7% of reported members are actual physicians. The true number of PCRM members that are genuine medical professionals is also highly questionable, since anyone, with or without credentials, can join. The watch-dog group Activist Facts’ website states: “PCRM has successfully duped the media and much of the general public into believing that its pronouncements about the superiority of vegetarian-only diets represent the opinion of the medical community.”

In addition to promoting veganism, PCRM fanatically opposes the lifesaving use of animals in the medical field, from research to the animal-derived products essential for numerous medical materials and medicines. The group has actively and aggressively campaigned against numerous widely respected health charities that support and utilize animal research to help cure human diseases—groups such as the American Heart Association, the American Cancer Society, St. Jude Children’s Research Hospital, the American Foundation for AIDS Research, the Christopher Reeve Paralysis Foundation, the American Red Cross, and the March of Dimes.

PRCM is Harshly Criticized by Physicians and the American Medical Association

PCRM has been harshly criticized by a number of doctors and medical groups. The American Medical Association (AMA), once referred to PCRM as a “fringe organization” that employs “unethical tactics” and is “interested in perverting medical science.” Montreal, Quebec’s McGill University chemist Dr. Joe Schwarcz called PCRM “a fanatical animal rights group with a clear-cut agenda of promoting a vegan lifestyle” that “masquerades as a just scientific body.”
One former director of research for the Center for Consumer Freedom stated, “Neal Barnard is using his latest book to disguise animal rights propaganda as medical advice…Most Americans are too smart to take dietary advice from PETA. But that’s exactly what you get with Barnard’s anti-meat recommendations.”

It stands to reason that Barnard and PCRM have had long and well-documented interconnectedness with groups like the People for the Ethical Treatment of Animals (PETA) and other animal extremist groups, including two that were considered to be “ terrorist threats” by the Department of Justice: Animal Liberation Front (ALF) and SHAC (Stop Huntingdon Animal Cruelty).
Former PCRM spokesperson, Dr. Jerry Vlasak, was quoted as saying: “I think there is a use for violence in our movement. And I think it can be an effective strategy. Not only is it morally acceptable, I think that there are places where it could be used quite effectively from a pragmatic standpoint… And I don't think you'd have to kill — assassinate — too many vivisectors before you would see a marked decrease in the amount of vivisection going on. And I think for 5 lives, 10 lives, 15 human lives, we could save a million, 2 million, 10 million non-human animals. People get all excited about, "Oh what's going to happen when the ALF accidentally kills somebody in an arson?" Well, you know I mean, I think we need to get used to this idea. It's going to happen, okay? It's going to happen.”

PCRM does not openly advocate violence and thus distanced itself from Vlasak, but actively works to hide its ties to PETA and other blatant animal extremist groups to help maintain the charade of being simply doctors advocating for human health.

The deep ties between PCRM and PETA are not only ideological but have been financial and operational as well. Over the years, Barnard has shared professional (and allegedly, even personal) relationships with PETA’s leader, Ingrid Newkirk. Barnard has served as PETA’s “medical advisor” and has penned numerous articles as such. He also served on the board of the PETA Foundation, now known as the Foundation to Support Animal Protection.

Hundreds of thousands of dollars have been funneled to PCRM from PETA via the Foundation. It is a common tactic among animal extremist groups to branch out and share members and leadership. It serves as smoke and mirrors when resources are diverted or pooled among such groups, as well as to present a façade of credibility to the public when such groups quote one another.
It’s easy to see why PCRM has been referred to as “PETA’s lab-coated sibling.” In ad campaigns similar to those of PETA, PCRM has claimed that animal products are equivalent to drugs and that feeding children animal products is the same as child abuse, relying on shock value to catch attention and earn support from the uninformed. Examples of PCRM ads are an image of a corpse on a gurney holding a hamburger, and of the Wisconsin cheesehead on a grim reaper figure.

In a time when concerns about public health are at the forefront, it is reprehensible that PCRM is preying on society’s fears to further their barely-cloaked extremist agenda.

Further, to vie for the complete and total disruption of an already struggling food supply system and the unavoidable suffering that would follow is nothing short of sadism.