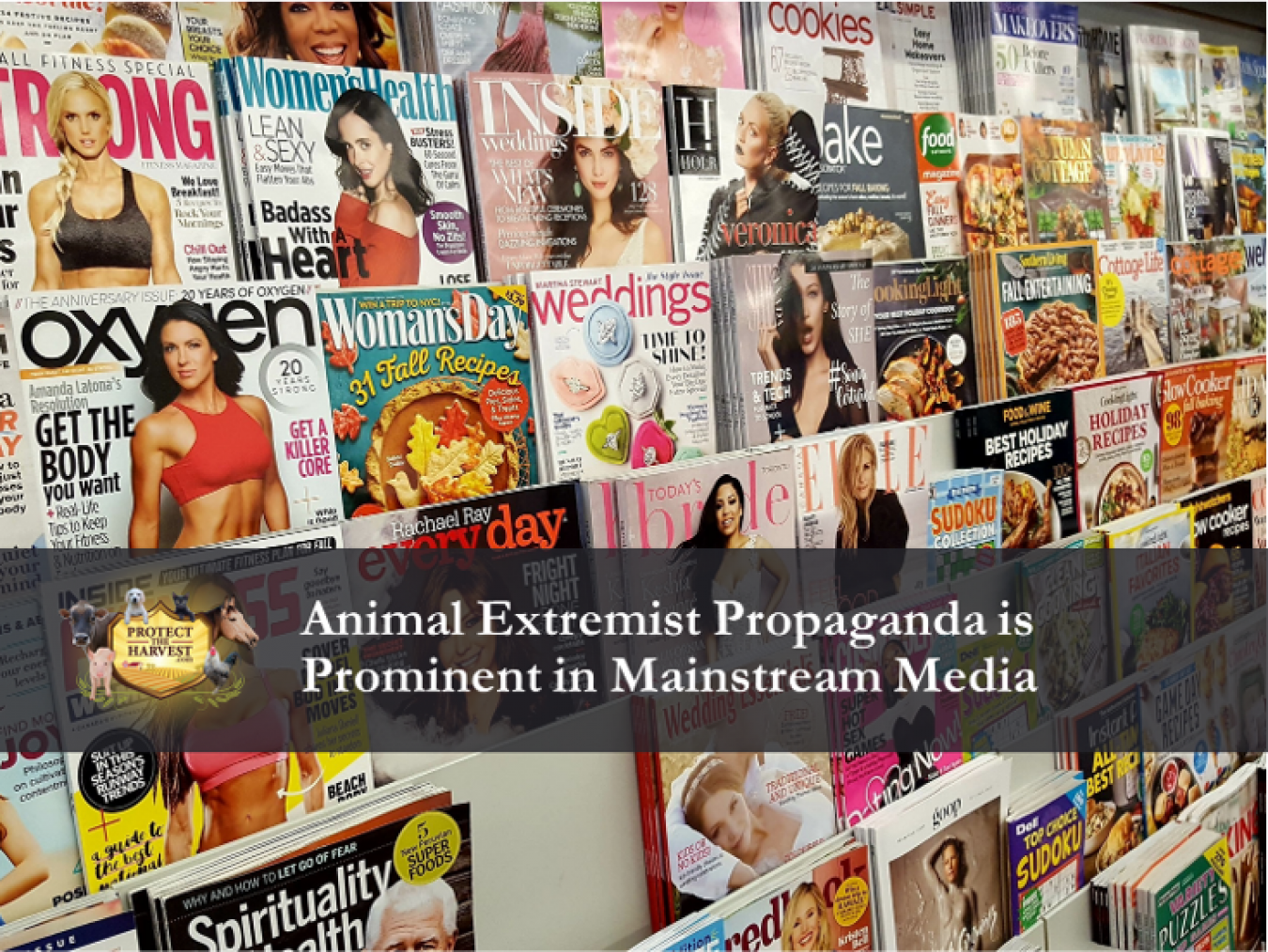 Animal Extremist Propaganda Is Prominent In The Mainstream Media

Animal content is extremely popular across all forms of media, especially the internet. This is hardly surprising as the vast majority of people genuinely love and care about animals. In spite of the millions of cute puppy videos and funny cat posts there lies a dark underbelly of content funded by, linked to, and supportive of the radical animal extremist movement.

With the widespread popularity of animals on the internet and their positive reception, the animal extremist movement has found it an easy way to capitalize on human emotions and curiosity. To Illustrate, as many as 65% of pet owners admit they post about their animals at least twice a week on social media. Single animal videos have been well known to rack up millions of views and are shared far and wide across the internet. This kind of content, and the stories that accompany them, make ideal and subtle carriers for animal rights propaganda.

In other cases activists will be less subtle and showcase shocking or extreme content designed to gain sympathy and emotions for their cause. This is a prevalent issue in media, a short search of “animal welfare” or “animal rights” on any given major publication’s website tends to reveal clear bias against animal agriculture and similar animal industries. Sometimes the headlines are blatantly obvious, but other times they are more subtle, wrapped up in a cutesy story about baby farm animals.

Not only are many of these stories painting all commercial animal industries in a very negative light, a look through the contributing authors is very telling. You repeatedly find very few, if any, actual animal professionals contributing any content to major publications or media outlets. Many of these authors have direct or indirect connections to significant animal extremist groups or rely heavily on them for their source material. Publications are often swayed by these groups as well, either due to publicity or funding. Unfortunately it often takes a look beyond the surface level to understand the ties.

The more the aware you are of such influence, the more easily you can spot it and avoid contributing to their agenda.

It is evident the animal rights community has been aggressive about establishing themselves in the journalism sphere. Animals and Media is an entire website and online style guide made specifically to share journalistic tactics in promoting animal rights interests and propaganda.

Besides containing laundry lists of guidelines to create a variety of different media with an animal rights bent, the site also has a guide for the public. They encourage “citizens” to “monitor and reward ecologically responsible and animal-friendly media” and to “financially support media that stand up for animals and nature.”

These guidelines and recommendation allow animal extremist interest groups to not only make the most of their own platforms, but to bring their ideologies into the public sphere as well, often under big name publications and other media outlets.

Some of the animal extremist media is more easily identified than others. For example, The Dodo has become known for their animal rights interests under the guise of cute, upbeat and “fluffy” animal-related content.

Now owned by Group Nine Media, who also owns NowThis, a brand who is likewise no stranger to pro-animal rights content, also owns The Dodo. The Dodo has had an animal rights gravitation from the start. One of their first articles to truly go viral was in 2014 titled “Recently Spotted 103-Year-Old Orca Is Bad News For SeaWorld.”

Today their trademark content is their videos, all of which are extremely shareable on social media. This technique has helped build the brand into an internationally recognized giant. Among those featured in some of these are well-known animal extremist organizations and sanctuaries including the Goats of Anarchy, Field of Freedom, and the Gentle Barn.

As Dodo’s founder Izzie Lerer told Business Insider, “We're seizing a moment where animal content is ruling the internet, and the animal welfare movement is gaining a great deal of momentum.” Lerer is no stranger to the animal rights world; in 2015 she was a speaker at the Animal Law Conference, an event co-presented by the Animal Legal Defense Fund and the American Society for Prevention of Cruelty to Animals (ASPCA).

Despite coming across as having sincere intentions about animal welfare, a lot of content is generated and, in some cases, funded by radical animal extremist groups with deep pockets. One of the most notorious examples of this is The Guardian who has an entire section dedicated specifically to animal rights and anti-animal agriculture stories.

TDF Honest Farming, a Facebook page managed by dairy farmer and industry advocate Derrick Josi, helped expose an ugly truth to his wide audience. In 2017, The Guardian was granted a jaw-dropping $886,600 to cover more stories on “factory farming” and farm animal cruelty by the Open Philanthropy Project. This funding group has ties to the Humane Society of the United States, the Humane League and similar organizations.

There is no evidence to suggest DxE in any way paid Vice for the documentary. However, it’s worth mentioning that the nonprofit organization reported $105,805 in assets at the end of 2018. That same year DxE reported spending no less than $470,021 on the “production and dissemination of educational materials.” A good part of DxE promotion is none other than media, videos and social media.

Sadly there are many seemingly innocent platforms and media outlets who propagate animal rights content or have direct ties.

While they have a healthy track record of supporting zoos, aquariums and other animal industries, the TV giant Animal Planet has other more radical connections. These include ASPCA and the World Wildlife Fund who were both partners as part of the channel’s “Reach Out. Act. Respond.” charity campaign.

In 2020, Animal Planet worked with Dan McKernan and his organization Barn Sanctuary to film the series Saved By the Barn. This animal sanctuary specifically rescues farm animals, who according to their mission statement, “serve as an example for why we strive to lead society towards a plant-based lifestyle.”

Animal Planet also got into hot water with another show, Whale Wars, which aired from 2008 to 2015 as it was led by animal activists. The show followed Sea Shepherd, an activist and strongly anti-whaling group. Ultimately it came to a rocky end after mounting legal issues between the group and the Japanese government.

While not necessarily as directly close to animal rights groups, big names such as National Geographic, Huffington Post, The Ecologist, and even Psychology Today have a fair amount of animal rights leaning content. More often than not, the negative animal industry coverage far outweighs positive or even neutral animal content.

Natasha Daly, writer and editor for National Geographic does investigative reporting which “focuses on animals: their welfare, conservation, and exploitation.” Her cover story in June 2019 on international wildlife tourism was discussed by both the animal extremist and animal welfare communities. Later that year she participated in an interview on the Species Unite animal rights podcast. Her work has also been shared by groups including PETA and Animal Rights Watch.

Huffington Post also has its fair share of pro-vegan anti-animal agriculture content, many of which were written by Anna Pippus. According to her byline, Pippus is an “Animal Rights Lawyer & Director of Farmed Animal Advocacy at Animal Justice.” Animal Justice is a Canadian animal law advocacy organization dedicated to working against animals being used for clothing, food, research, entertainment and even in the pet trade. Most of the stories written by Pippus specifically focus on farm animals.

Similar to The Guardian, The Ecologist follows suit having an entire section dedicated to animal rights with multiple contributors. One of them is a woman named Louisianna Waring – the Insight and Commercial Policy Officer at The Vegan Society. At the top of The Ecologist’s 2018 “10 animal and environment campaigns you can support right now” list is none other than PETA.

Even Psychology Today has a steady stream of activism-related content. That said, they do have articles with opposing viewpoints on radical veganism. Gordon Hodson, author of the book Why We Love and Exploit Animals, has published several articles in the magazine including “Why Vegans Make Some People So Uncomfortable and Angry” and “Advice for the Animal Rights Movement.”

Marc Bekoff, who edited the second edition of the Encyclopedia of Animal Rights and Animal Welfare has his own Psychology Today blog, “Animal Emotions.” Bekoff has been explicitly anti-animal agriculture and in the concluding paragraph of his January 2021 post summarizes “The jury is no longer out, and there is no room left for guilt-driven and other justifications. Dairy is cruel to animals and the planet.” At a glance, it’s easy to question why publications such as Psychology Today should be a sought-after platform for activists. In 2015, Bekoff explains some of his rationale in an article he wrote for all-creatures.org titled “Why Writing for Psychology Today Is a Good Idea.” In it, he makes his case on the importance of brining animal extremist ideas into the public eye.

It is a difficult time in history to be involved in animal industries due to media pushback. Trying to share authentic animal welfare issues, backed by subject matter experts, seem to go by the wayside when the press seems to be bent on inflammatory stories.

While it may be too late to put the genie back into the bottle, there are ways consumers of media can remain vigilant to the bias present in many animal stories. Being aware of publications and authorship are preemptive steps that everyone should take before assuming the validity of an article.

Before sharing an article or even subscribing to a particular publication, be sure to do your due diligence and make sure their staff and articles are reputable. One of the reasons animal extremist media has become so prolific is because of mass sharing and exposure. Even when attention is negative, extremists groups gain the exposure they want which is having more eyes on their cause.

Avoid commenting, sharing, subscribing or clicking on this type of content whenever you can. All the data collected from these interactions signals them to create more content and it helps them further spread their ideology.

If you are passionate about animal industry advocacy, it may be beneficial to explore the media scene on your own - create your own content on blogs or try to get your own article published. Share articles that are factual and unbiased which promote authentic animal welfare, not animal extremist ideology.

Prev Article
Interview with Dale Ludwig, Protect The Harvest Board President
Next Article
We Must Stand United- Dog Breeding