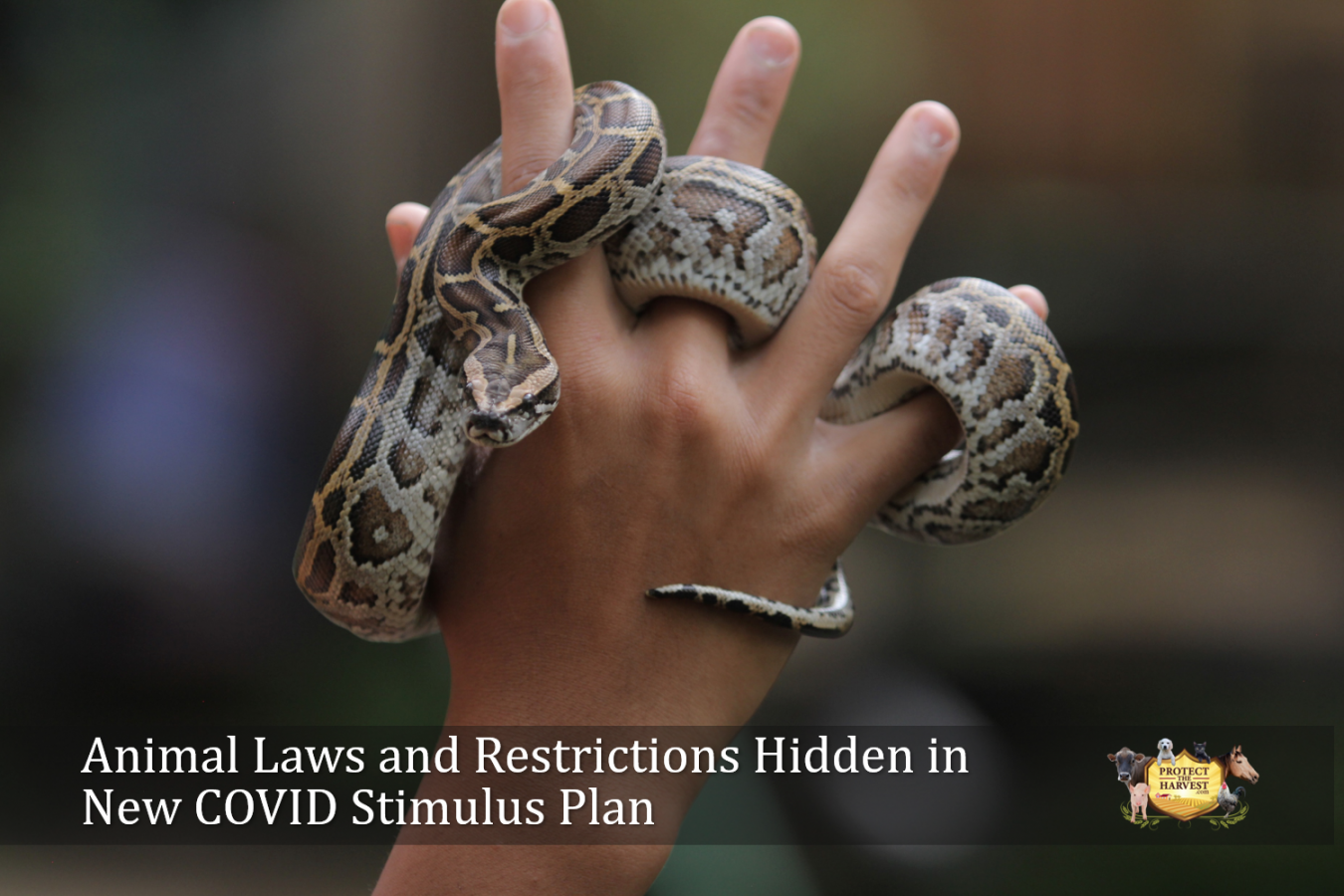 On May 15th, 2020, the Health and Economic Recovery Omnibus Emergency Solutions Act (HEROES Act) passed in the House of Representatives. Its next step is to go before the Senate sometime soon. Senate Majority Leader, Mitch McConnel has described it as a “big laundry list of pet priorities.” He doesn’t know just how true that is. Buried on pages 1,628-1,635 of the over 1,800 page bill, lies the Wildlife-Borne Disease Prevention Act. The language is using the COVID-19 pandemic to push forward animal regulations. The language pertains to exotics bred domestically and limits them from being transported across state lines. The language also expands the list of animals classified as “injurious” and expands the list of those that “have the potential to cause harm”.

Our friends at USARK (United States Association of Reptile Keepers) have alerted us to the concerns of this addition to the new stimulus plan. They stated: “The Act contains language that would reverse the USARK federal lawsuit victory by reinstating the ban on interstate transportation of species listed as injurious under the Lacey Act.”
“In that landmark decision, four federal judges agreed that USARK was correct and that the Lacey Act did not ban interstate transportation of injurious species based on the original language of the Lacey Act and the intent of Congress. As a result of this fight for our members and the herpetocultural community, this meant animals domestically bred under human care could be moved and sold across state lines (within the continental United States).”

The Lacey Act
According to the U.S Fish and Wildlife Service, the Lacey Act describes “a species of wildlife can be listed as injurious when it has been demonstrated to be harmful or have the potential to be harmful to either the health and welfare of humans, the interests of forestry, agriculture, or horticulture, or the welfare and survival of wildlife or wildlife resources.” It also outlines that in order “To control the introduction and spread of an injurious species, the listing of the species as “injurious” under the Lacey Act means that its importation and interstate transport are prohibited without a permit issued by the Service. This prohibition includes importation or interstate movement of live animals, their gametes, hybrids, and viable eggs.”

The Consequences
Unfortunately, the proposed law now included in the COVID relief bill would overturn that decision. Specifically, the act would add this language to the Lacey Act (Title 18 Section 42): “or any interstate transport between States within the continental United States.”
Not only will it ban interstate transportation, but it will expand the list of what is considered an injurious species. What is especially worrisome is the vague language included in the bill. What species fall under the category of “wildlife”, and what species are considered “injurious”. People can be harmed accidentally by their own pets, horses, or livestock on any given day. Would this new law affect them too?

Zoonotic Diseases
The act has likely been included in this new stimulus bill under the guise of human health precautions against zoonotic diseases. However, zoonosis can stem from any and all animals and has since the beginning of time. Rabies, Avian Flu, and now COVID-19 are all examples of diseases that have crossed over from animals to humans. While it is important to put measures in place to reduce their incidence, the fact is that those measures are already in place and additional regulation is not needed here. This is especially true when those restrictions could have far reaching effects on animal owners here in the U.S.

Our Concern with Buried Legislation

Sometimes the legislation animal extremists propose is very overt, like bills to ban rodeo or selling animals from federally licensed breeders in pet shops. However, much of the time animal extremist legislation is snuck in, hidden beneath or within a bigger plan that seems “fair”.
We saw this recently with the PACT Act in 2019 and we are seeing it now here with the COVID-19 stimulus bill. The efforts by animal extremist groups and those affiliated with their movement to influence legislation is constant. It takes all of us to be diligent about it. We, at Protect The Harvest, will continue to share information about relevant legislation with you all in the hopes that it drives home the reality that this battle is ongoing and does not stop, even during a national crisis like the coronavirus pandemic.