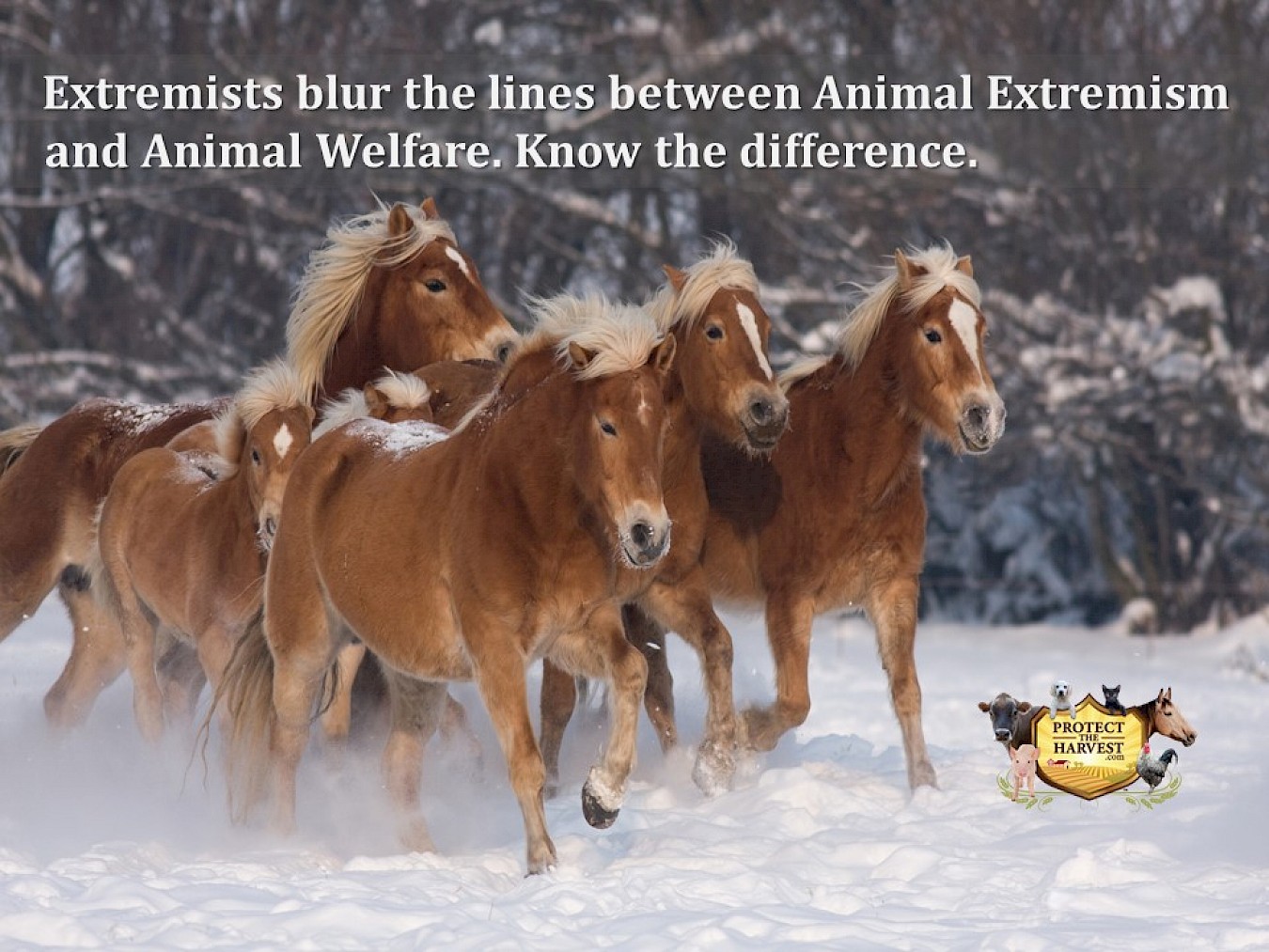 There is a big difference between animal extremism and animal welfare - the terms need to be clarified.

The American Veterinary Medical Association (AVMA) has taken a formal position defining the difference between the two labels, Animal Extremism vs Animal Welfare. In their detailed Policy on animal welfare and animal extremism, they state that they cannot endorse the views of animal extremist groups. Here’s a quote from their policy:
“Animal rights is a philosophical view and personal value characterized by statements by various animal rights groups. Animal welfare and animal rights are not synonymous terms. The AVMA wholeheartedly endorses and adopts promotion of animal welfare as official policy; however, the AVMA cannot endorse the philosophical views and personal values of animal rights advocates when they are incompatible with the responsible use of animals for human purposes, such as food, fiber, and research conducted for the benefit of both humans and animals.”

Let’s take a closer look at the fundamental differences between animal welfare and the animal extremism philosophy:

Animal Welfare –
Animal welfare includes all animals, whether used for food, companionship, or sport. It is based on a principle of animal ownership and reflects a commonsense approach that animals should be treated well, and animal cruelty is wrong. Animal welfare standards and guidelines for animal use and management are based on sound veterinary and animal husbandry experience, research, and practices. The AVMA views animal welfare as a, “…human responsibility that encompasses all aspects of animal well-being, including proper housing, management, nutrition, disease prevention and treatment, responsible care, humane handling, and, when necessary, humane euthanasia”. There should be no unnecessary suffering, including animals that provide for human needs.

Animal Extremism -
Animal extremists believe in an ideology that there is no distinction between animals and humans. They view animal ownership of any kind as exploitation and slavery. The true goal of these groups is to work for legislation and regulations that ultimately remove animals from human care. In some instances, their agenda is pushed to a point where animals and humans will have the same rights under the law. Often, their true goals are cloaked as cruelty prevention, however, ultimately, their view of cruelty is simple ownership.
The NCRAOA (North Carolina Responsible Animal Owners Alliance), described what animal extremist groups are all about and their activities:
“Animal rights groups exploit our love of animals to work for various types of restrictive legislation (limit laws, breed specific legislation, mandatory spay/neuter) as well as laws that are steps toward changing the legal status of animals as property”, and “The animal rights movement is about control, not animal welfare. Supporting legislation based on emotion and philosophical interpretation provides a platform in our legal system for incremental increases toward animal status changes.”

Protect The Harvest works diligently every day to expose the activities and the truth about these groups to the American public. Our information is helping the public realize animal extremist groups are pushing for a dramatic restriction of our rights and our way of life. Because of our efforts, many animal extremist groups have accused us of being against animal welfare. The false accusations by animal extremist groups are in response to our progress. Not only is Protect The Harvest a firm advocate for animal welfare, our employees and volunteers also practice it. We are all pet owners, and a large number of us also own horses and livestock. We care about all animals; we care about their health and well-being. We practice and support animal welfare.
Extremist groups conveniently blur the definitions of animal extremism and animal welfare to both confuse and mislead the public. This is a deceitful tactic to continue to garner donations and support from kind-hearted yet misinformed animal lovers. As we showed above, the two terms are very different. Know the difference and help Protect The Harvest continue to educate the public and protect animal ownership, agriculture, and our heritage.