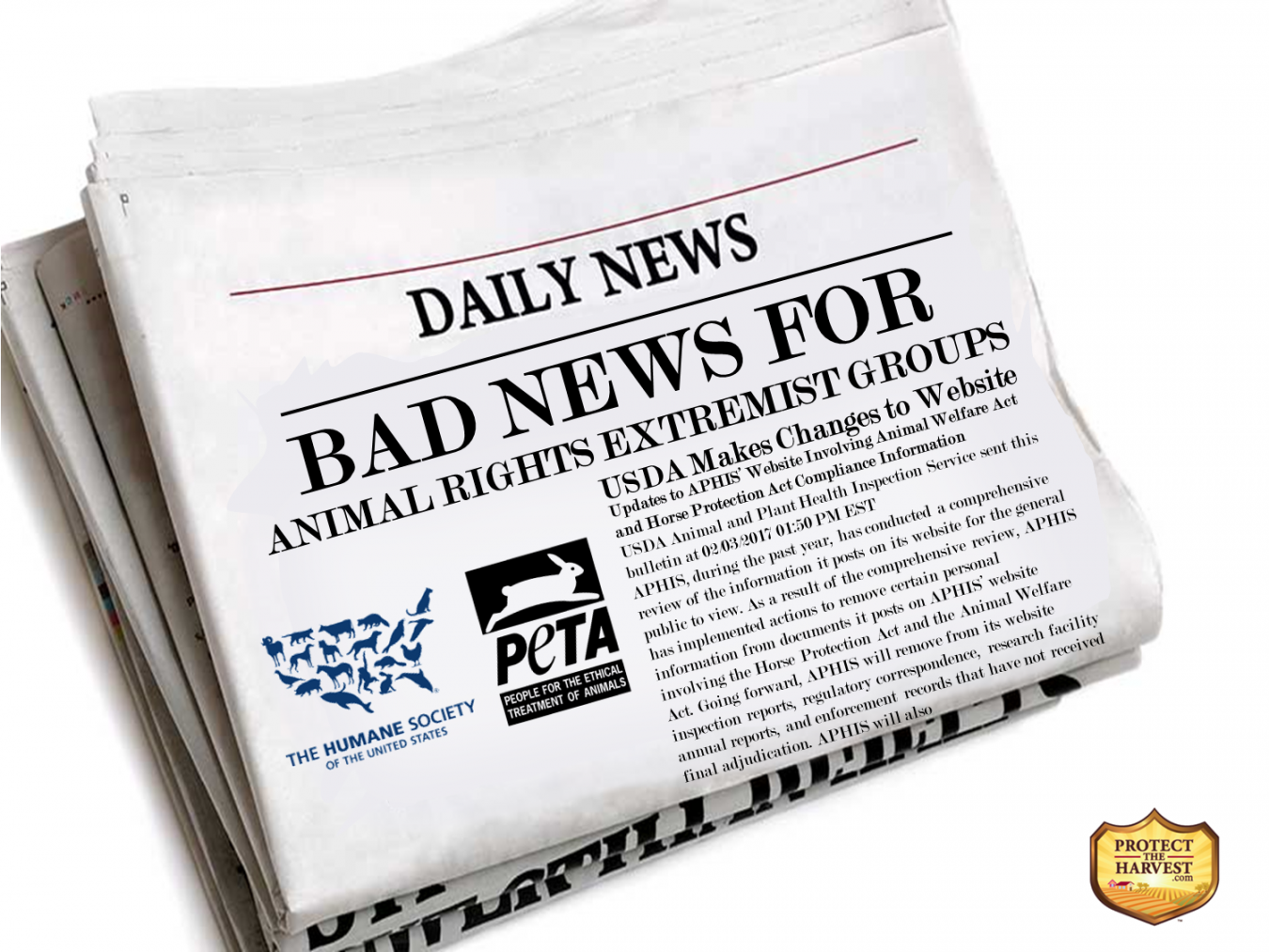 Animal rights extremist groups are upset about the USDA’s announcement

Something big happened on February 3rd, that has Animal Rights Extremist groups very upset. The USDA announced the removal of certain personal information from documents it posts on the APHIS website involving the Animal Welfare Act and the Horse Protection Act. The list had included a variety of documents which included: information about USDA license holders, official warnings, settlements made before trial, administrative complaints, inspection reports, research facility annual reports, as well as licensing information about breeders.

Here are excerpts from the official notice on the USDA web page: “As a result of the comprehensive review, APHIS has implemented actions to remove certain personal information from documents it posts on APHIS’ website involving the Horse Protection Act and the Animal Welfare Act. Going forward, APHIS will remove from its website inspection reports, regulatory correspondence, research facility annual reports, and enforcement records that have not received final adjudication. APHIS will also review and redact, as necessary, the lists of licensees and registrants under the Animal Welfare Act, as well as lists of designated qualified persons (DQPs) licensed by USDA-certified horse industry organizations. Those seeking information from APHIS regarding inspection reports, research facility annual reports, regulatory correspondence, lists of regulated entities, and enforcement related matters may submit Freedom of Information Act (FOIA) requests for that information. FOIA requests can be submitted here: https://efoia-pal.usda.gov/palMain.aspx. Records will be released when authorized and in a manner consistent with the FOIA and Privacy Act.”

Here's why this is move is important:

The most troubling is the information previously listed showed the names and addresses of USDA license holders. USDA license holders comprise of a large variety of animal owners; from veterinary researchers and university research facilities, to livestock owners, dog and horse breeders, as well as exhibitors. The second most troubling is the fact that these lists also showed an accounting of administrative complaints. According to the USDA web page, “The administrative complaint identifies the alleged violator and the alleged violations, and seeks the imposition of sanctions”. The key word here is “alleged”. What this means is that they had people listed with “alleged” violations, which may or may not be accurate.

Filing a complaint is easy, all you have to do is click on a tab on the USDA web page and fill out an online form. Then those alleged complaints, complete with personal information and locations, are loaded up on a government website. Add those two up and you have a perfect recipe for a witch hunt, which is what has happened to many animal owners in the past.

This move is a big relief to researchers, breeders, exhibitors and livestock owners. Animal rights extremist groups like the Humane Society of the United States, and People for Ethical Treatment of Animals, used the lists and information available on the USDA-APHIS website to target, harass and in a number of cases, commit terrible crimes against animal owners. According to Nature Magazine, “Matthew Bailey, president of the non-profit Foundation for Biomedical Research in Washington DC, says the move has some merit, because animal rights activists… target scientists who use animals. “I would certainly agree that protection of personal information is of utmost importance, given the rich history of targeting individuals involved in animal research,” he says.”

We’ve reviewed a large number of articles about this latest development and there are some things that are not accurate in regards to the reporting in the media. The most glaring is many news outlets are reporting that “animal welfare groups” are upset. It isn’t animal welfare folks who are upset about this. Animal rights extremists like the Humane Society of the United States, PETA, and their affiliated groups are ones who are actually upset. Those groups are not really interested in animal welfare. They are set on their agenda of eliminating animal ownership. If you review some of the articles yourself, you’ll see over and over again representatives from PETA and the Humane Society of the United States quoted. The real truth is that animal rights extremist groups are the ones that are unhappy because essentially, their target list was just taken down. It is about time.