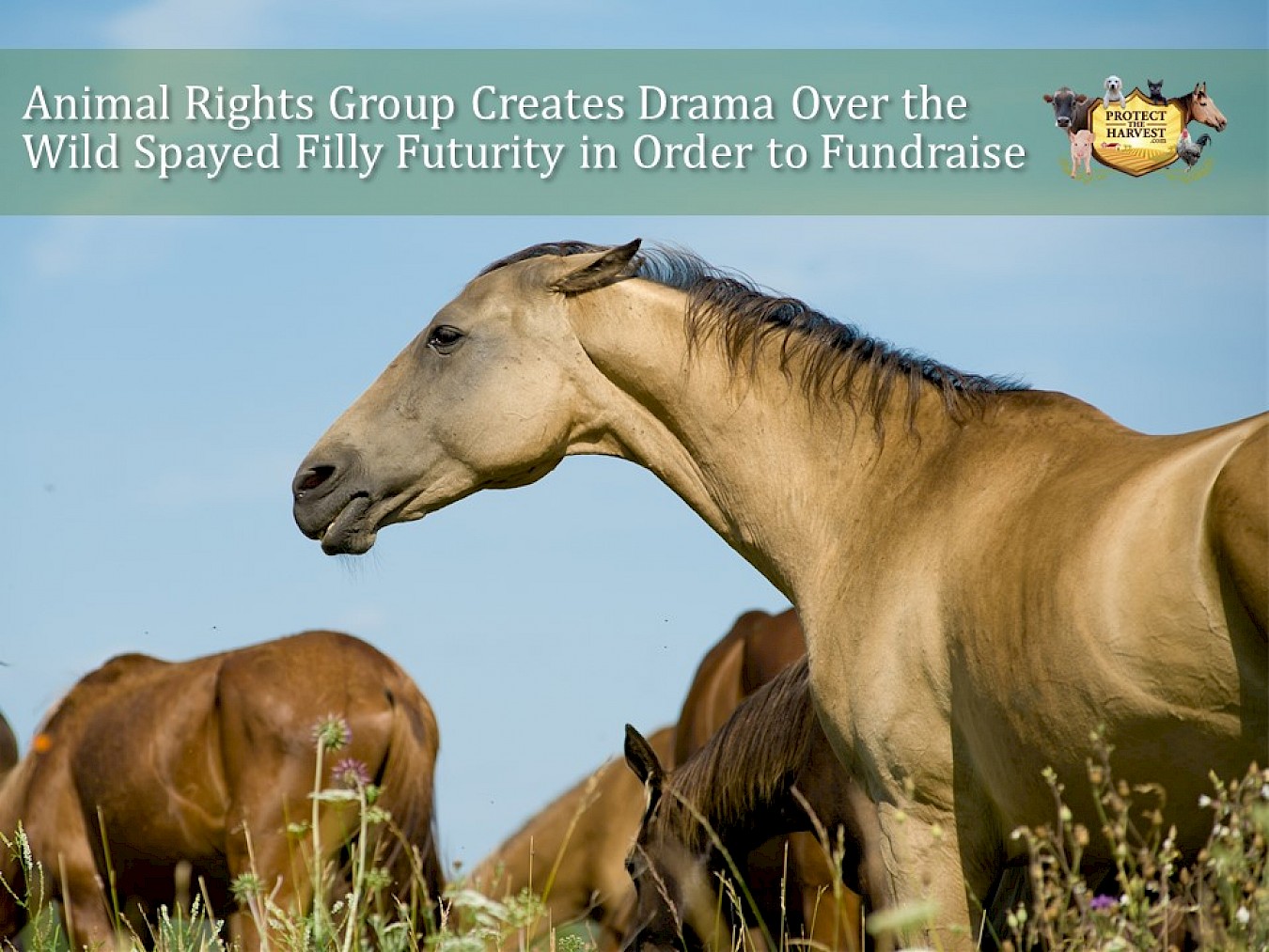 With Protect The Harvest’s special event, the Wild Spayed Filly Futurity (WSFF), coming up in mid-September at the Reno Snaffle Bit Futurity, extremist animal rights groups naturally couldn’t miss a chance to panhandle. In an attempt to ride on the coattails of the WSFF’s success, one animal rights group put up a typically misguided and laughably melodramatic call to action online, targeting the WSFF, titled “End the Capture, Torture & Forced Performances of Wild Young Fillies.”

The page includes a suggested form complaint letter for followers to send to Reno Snaffle Bit Futurity organizers, and of course, the utterly predictable “donate” button at the top of the page.

The group uses of the usual buzzwords that are sure to trigger uninformed and intentionally misled supporters to hit the “donate” button. Words like “torture,” “horrific,” “perverted,” and “barbaric” are scattered throughout the page, but certainly the thesaurus was the only source utilized in their “research.” This is nothing new; animal rights groups like these always rely on histrionics, misinformation and outright falsehoods to garner donations.

Bottom line, animal rights groups do not believe that any animal should be utilized by humans or should be in human care. They view all animal ownership as akin to abuse and slavery. They are targeting the Wild Spayed Filly Futurity, because it has become a popular program and for no other reason than it involves horses. We are not going to stand by and allow them to fundraise off the Wild Spayed Filly Futurity, the very program that was started in response to animal rights groups throwing up roadblocks to proper management in the first place.

ANIMAL RIGHTS MYTH: The fillies are “captured” from the range just to compete in the WSFF.
ANIMAL WELFARE FACT: Wild horses are removed from the range because of extreme overpopulation and limited resources that cannot sustain them. Gathering not only saves wild horses from death by starvation and dehydration, but also works to preserve rangelands. The fillies in the Wild Spayed Filly Futurity program are selected from Herd Management Areas (HMAs) that had previously been gathered from the rangelands. The fillies were living in long term holding at the corrals, in Burns, Oregon.

ANIMAL RIGHTS MYTH: There is no overpopulation of wild horses on the range and horses are only gathered to make room for ranchers’ cattle.
ANIMAL WELFARE FACT: When the Wild Horse & Burro Act was passed in 1971, appropriate management levels (AML) were established for each HMA to help ensure multiple use of rangeland resources, including wild horses, native wildlife, and livestock grazing. The total number of wild horses that could exist in balance with other uses, as mandated since the BLM’s beginnings, was determined to be about 27,000. There are currently close to 90,000 horses on the range, and another 50,000 that have been removed from the range and are in long term holding. Meanwhile, the number of privately-owned livestock on the range has been cut by more than half since the 1950s.

ANIMAL RIGHTS MYTH: The standing spay procedure is inhumane.
ANIMAL WELFARE FACT: The standing surgical spay procedure follows modern veterinary protocols, including anesthesia, systemic pain management, pain blocking at the surgical site, long-acting antibiotics, and after-care. The fillies are put in a specialized chute; keeping them standing reduces the chance of injury that laying them down under general anesthesia can sometimes present. The procedure requires only a small incision in the vaginal wall. Since the incision is internal, it is protected by the body and is therefore less subject to infection. Additionally, studies have shown that vaginal tissue heals more quickly than other body tissues. The fillies are closely monitored for about a week after being spayed. Spaying for the WSFF is done in the spring; the fillies are not offered for sale until September, leaving ample time to ensure their complete healing and overall well-being. The procedure can be viewed here: https://youtu.be/rjxzcmjXGTI

ANIMAL RIGHTS MYTH: PZP is a more humane option for population control than the standing surgical spay.
ANIMAL WELFARE FACT: PZP has been touted by animal rights groups as a good option for population control, mainly because the Humane Society of the United States (HSUS) holds the patent for PZP and therefore has a vested interest in its use. Ironically, while animal rights groups advocate PZP’s use, they protest wild horse gathers as being inhumane—the gathering of wild horses is required to annually administer PZP. The vaccine prevents an egg from being fertilized. It does not prevent a mare from cycling, meaning that mares given the PZP vaccine are subjected to repeated and ongoing breeding by numerous stallions—hardly a humane situation. Spaying is a “one and done” situation, requiring exponentially less time and resources than administering PZP, while being more humane and effective overall as well.

ANIMAL RIGHTS MYTH: Wild fillies are not suited mentally or physically to compete in a reined cow horse event. One animal rights group asserts that “As mustangs, these fillies have not been bred for herding and reining. Their bones are not yet fused to do this arduous activity which may cause medical problems when they reach 8 or 9 years old.”
ANIMAL WELFARE FACT: There has never been a program like the WSFF, which has not only successfully showcased the amazing potential of wild horses, but has also demonstrated the viability of the standing surgical spay as a humane and effective means of controlling on-range wild horse populations. The wild spayed fillies in the program are trained and shown at the same ages as their purpose-bred reined cowhorse counterparts in the Reno Snaffle Bit Futurity. Even the most basic knowledge of equine physiology includes an understanding that there is little to no difference in the timeline of physical development between breeds. Many horses shown in futurities go on with their show careers, while still others become ranch, roping, or trail horses, living long, full, productive lives.

Since wild horses are truly a genetic mixing pot and one of the many ways their ancestors were utilized was by ranchers to help manage livestock, they most likely carry quarter horse and other reined cow horse type bloodlines. The assertion that they are not mentally suited for the tasks in reined cow horse competition because they haven’t been specifically bred for it is asinine. While the wild fillies might not have as much natural inclination to be “cowy” or “steppy” and do natural sliding stops as purpose-bred reined cowhorses do, this does not mean that the wild fillies are incapable, as animal rights groups imply. Their ancestors were the first reined cow horses.

ANIMAL RIGHTS MYTH: The Wild Spayed Fillies are expected to compete at the same level as horses specifically bred to compete in reined cow horse events.
ANIMAL WELFARE FACT: There is no expectation during the competition that the fillies will perform at the same level that purpose bred reined cow horses do. This is why they have their own special division, where they are simply competing against each other on a level playing field.

Animal Rights Groups Are Not Concerned About Animal Welfare

Such objection to the WSFF is plainly just another ruse to fleece the unknowing public for donations. It is also very telling, as it seems animal rights groups do not wish for a solution to the wild horse crisis. After all, if on range wild horse populations were at appropriate management levels and there was no need for emergency management practices, there would be one less tool in animal rights groups’ fundraising bag of tricks.
Horses, including wild horses, hold a special place in the hearts of Protect The Harvest team members and volunteers. Many are lifelong horsemen and women. This is why we have done the research, stepped forward, and worked tirelessly to educate the public on the truth about the wild horses on the rangelands—a truth that animal rights activists have worked very hard to prevent getting out.

The fact of the matter is that animal rights groups are entirely to blame for the wild horse overpopulation catastrophe, and they have been getting millions in donations while horses starve. Every time the BLM has tried to do what was best for the horses they have been tasked with managing, lawsuits from animal rights ideologues have blocked their every move, resulting in incalculably more suffering for wild horses on depleted rangelands. The actual well-being of wild horses, native wildlife and the ecosystem is literally sacrificed for the well-being of animal rights groups’ bank accounts.

The WSFF is entering its third year. Every step of the process, from spaying the fillies to their competing in Reno, has been documented and shown to the public. The fillies are obviously not only of sound mind and body, but are usable, lovable, and adoptable animals. All 12 of the first group of spayed fillies competed in 2018 and this year, all 11 of the fillies sold in 2018 are planning to compete in 2019, which would hardly be the case if the WSFF was what animal rights groups make it out to be.

Protect The Harvest invites you to learn more about the Wild Spayed Filly Futurity, and if you can, please join us in person in Reno on September 13 to see these phenomenal fillies and their trainers compete.

Prev Article
Watch the Wild Spayed Filly Futurity Live!
Next Article
Many Environmental NGO’s Do Nothing to Actually Protect The Environment