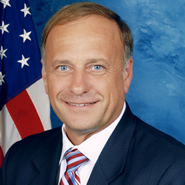 The battle between anti-food producers and traditional America has made its way into the Farm Bill.

In 1933, Congress created the Farm Bill to alleviate extremely low commodity prices. Since then, Congress has been tasked with re-evaluating the Farm Bill every five years. Today, the Farm Bill is more than 1,700 pages in length.

Last year, Congress delayed final actions on the 2012 Farm Bill with a yearlong extension set to expire September 30th, 2013.  Congress is taking action in order to meet the set deadline, and within the past month, the U.S. House and Senate have each passed their own versions of the Farm Bill through their respective committees on agriculture.

According to Congressman King’s official statement, he’s, "... pleased that the Committee passed my amendment, the Protect Interstate Commerce Act (PICA) because states are entering into trade protectionism by requiring cost prohibitive production methods in other states.”

Simply put, the proposed PICA amendment reinforces the authority the U.S. Constitution gives to Congress to regulate interstate commerce. The PICA amendment would prohibit any one state from enacting laws that dictate agricultural production methods within another state.

The fact that this amendment is needed now is ridiculous. This is a protection that was guaranteed with the penning of the Commerce Clause  in our Constitution over 200 years ago.  But, with increased pressures and overreaching authority claimed by animal rights groups and detractors of new farm technology to dictate state laws and regulations for animal agriculture, such action from Congress is necessary.

Passing laws that ban products from other states, that don’t meet your state’s standards,  or demanding costly arbitrary labeling and segregation mandates are examples of the very type of abuse that the Commerce Clause was intended to prevent. New schemes from radical activists and their liberal supporters in states like California and New York should not be allowed to destroy the economies of other states or create a market that entirely favors products made only in their states.

Congressman King’s amendment has received strong support from agriculture groups, like the National Cattlemen’s Beef Association (NCBA.) Scott George, President of NCBA, was recently quoted by the Oklahoma Farm Bureau, saying, “We are encouraged by the amendment introduced by Rep. King, which would keep decisions regarding how to raise livestock and poultry in the hands of farmers and ranchers, where they belong.”

With world food production required to double by 2050 to feed the world, new technology and farming practices will be more vital than ever. It is critical that we become more productive to keep food safe and affordable. The results of undermining productivity in a world that has 880 million people under-nourished would be tragic.

Should any one state hold the power to control the agricultural economy of our entire nation?