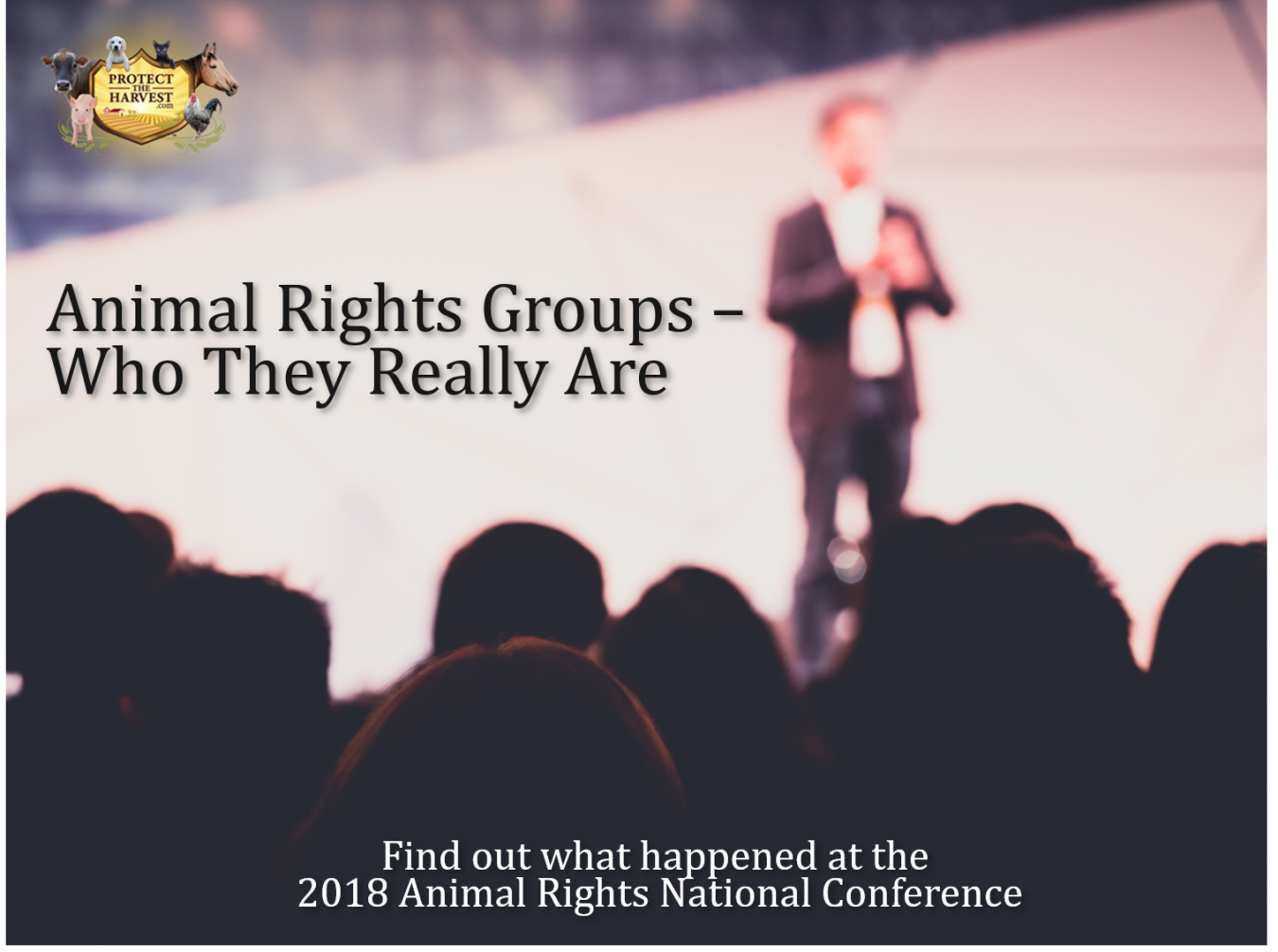 ANIMAL EXTREMIST GROUPS – WHO THEY REALLY ARE

The groups attending the conference confessed that their movement is not about animal welfare, like they have led people to believe. It was made clear to attendees, that the true agenda is about ending animal industries and ownership. This was exemplified by a quote from the Animal Agriculture Alliance report where a representative from The Save Movement says:

“Animal rights is different from animal welfare. It’s not about better cages; it’s about empty cages”.

Hypocrisy on the Agenda

In addition to exposing their true goals of ending animal ownership and human-animal interaction, hypocrisy was also on their agenda. These groups claim to be fighting for the respect of animals, yet they do not treat other humans with respect. The animal extremist industry is fraught with claims of sexual harassment. This is well evidenced by the recent resignation of past HSUS CEO Wayne Pacelle, under the cloud of sexual harassment. Another former HSUS Vice President also resigned under similar accusations. Even the host organization of the National Animal Rights conference is marred, the founder of FARM has been accused of turning a cold shoulder to sexual harassment claims within his own organization.

We outline “notable groups” in the paragraphs below because it is important to become familiar with each organization that attended the conference. We have previously shared the Animal Agriculture Alliance’s “Activist Web” which can be found on our website or theirs, it shows just how closely tied all of the animal rights and environmental groups truly are.

The Humane Society of the United States hides its radical tendencies under the guise of being a “mainstream animal rights organization”, all the while it supports legislation that will lead to an end to animal owner’s choices, animal agriculture, and animal exhibitions. The HSUS inaccurately portrays its goals to supporters and tricks them into believing that they are donating towards an organization that helps animals – it does not. The HSUS also recently dropped to just two stars on the Charity Navigator website– the ranking takes into consideration their financials, accountability and transparency. Due to this drop, they also lost their charity accreditation with Better Business Bureau’s Wise Giving Alliance.

At the conference, a spokesperson from HSUS discussed school programs that advocate for “Meatless Mondays” for school lunches at the conference. In previous articles we have drawn attention to the fact that these organizations are pushing their ideals in elementary schools in an effort to shape the views of children at an early age.

HSUS’s sister organization, the Humane Legislative Fund (HLF), is a money distribution machine that sponsors political candidates and funds legislation that pushes their ideals and agenda.

People for the Ethical Treatment of Animals (PETA)

People for the Ethical Treatment of Animals (PETA) is a radical animal extremist organization that is pushing to end all human-animal interactions. Its President, Ingrid Newkirk, has said that “Even if animal tests produced a cure [for AIDS] we’d be against it”. This is the core agenda within the animal extremist movement: animal’s lives are held above the lives of humans. Beyond that, PETA has been caught euthanizing healthy animals that were surrendered to them. At their facility in Norfolk, Virginia they had an adoption rate of 1% and a euthanasia rate of almost 70% (cats and dogs). The organization also supports the group the Animal Liberation Front which has been classified by the FBI as a domestic terrorist organization due to its violent actions like arson, breaking into personal property, and explosions.

At this conference a PETA representative discussed technological and social strategies to end animal farming. He pushed companies to invest in lab-grown cultured animal protein. This trend we find particularly hypocritical since for years these organizations have been trying to convince people that protein derived from animal sources is not a necessary part of the diet.

Another PETA spokesperson discussed the legality of protesting and gave recommendations and guidance for those interested. According to the report prepared by the Animal Agriculture Alliance, he specifically focused on the 4th and 5th Amendment and how they can protect activists.

Direct Action Everywhere is a fairly new organization, founded in 2013, that has embraced a more radical approach to “liberating” animals. This radical approach often involves illegal activity. Unfortunately, they have the support of other animal extremist groups, especially regarding their activities where animals are stolen from farmers. A representative of Social Compassion praised the Direct Action Everywhere raid on farmers in Northern California saying, “Our movement must adopt all avenues, the methodical and radical.” This quote exemplifies the thought process that overlooks the animal’s actual well-being over the action of “freeing” them.

Referencing DxE a representative from Compassion Over Killing stated during the conference: “There’s a lot we can learn from them.”

DxE was behind the invasion at the poultry farm in Northern California, effectively exposing the livestock to potential pathogens which in turn endangered the lives of all of the hens at the farm. The organization’s Founding Organizer has also had several run-ins with the law this year. He was caught harassing Whole Food patrons in a Denver, Colorado store. He is also facing four felonies that could put him and five other activists in prison for up to 60 years for stealing piglets from a farm in Utah.

At the conference, a spokesperson from DxE discussed the fact that Direct Action Everywhere is a radical organization because they look for confrontation to draw media coverage.

The Animal Legal Defense Fund was founded in 1979 to promote the animal extremist agenda through the legal system and to campaign against farm protection laws.

A spokesman from ALDF addressed conference-goers regarding laws that protect agricultural facilities and farms from undercover photos or videos being taken out of context and edited and then used against them to make false claims. Agriculture protection laws also protect agricultural producers from falsified information on employment applications. These laws can be found in nine states including Kansas and Missouri. They spoke about these protective laws in 2011, saying: “We’re concerned that this could be a national trend, and certainly it’s more of a threat in states that are more agricultural and have more legislatures that are more sympathetic to the agriculture lobby.”

FARM is known to manipulate the media by sending out form letters written by its Communications Director, in an effort to create the perception that they have a large and devout following.

The founder of FARM who has been accused of turning a blind eye to sexual harassment claims, stepped aside recently to allow a female associate to assume one of the leadership roles within the organization. Since then, she has been a part of the operations team for the Animal Rights National Conference. This year was no different, she gave opening and closing statements at the event and was quoted by the Animal Agriculture Alliance report as saying “If you’re not vegan, you probably will be by the end of this conference.”

Compassion Over Killing was founded in 1995 and their founder then left to join the HSUS. This is the same HSUS member who as we mentioned earlier, recently resigned from a leadership position under the cloud of sexual harassment allegations. The mission of COK is to persuade all people to become vegans.

Mercy For Animals was founded in 1999. The organization advocates for the total elimination of animal agriculture and promotes a vegan lifestyle. Like Compassion Over Killing, they rely on undercover investigations, and subsequent distribution of falsehoods and misinformation to promote their message.

A spokesperson from Mercy For Animals urged everyone there to become a vegan during her presentation and offered information on how the audience can become an investigator for them.

Other Groups in Attendance:

Besides the more “notable” groups that we highlighted above, there were 100 other animal extremist groups in attendance at the conference. Some include: The Humane League, The Good Food Institute, The Save Movement, and Vegan Outreach. These groups are working toward similar goals, but each may have a specific cause that it is more closely tied – for example animals used in research, ending animal agriculture or working on animal rights internationally.

According to the Animal Agriculture Alliance report, the main theme of the conference was “Animal Liberation” rather than animal welfare. It is important for people not involved in the animal extremist agenda to know that their goal is often misleading. These groups truly do not care about the welfare of animals as most often in pursuit of their goal, their actions place animals in grave danger. We cannot stress this point enough: “Animal Extremism has nothing to do with Animal Welfare.” The groups who attended the National Animal Rights Conference are doing their best to sway the public into believing their misinformation – to combat this we must stand together to protect animal ownership and animal agriculture.