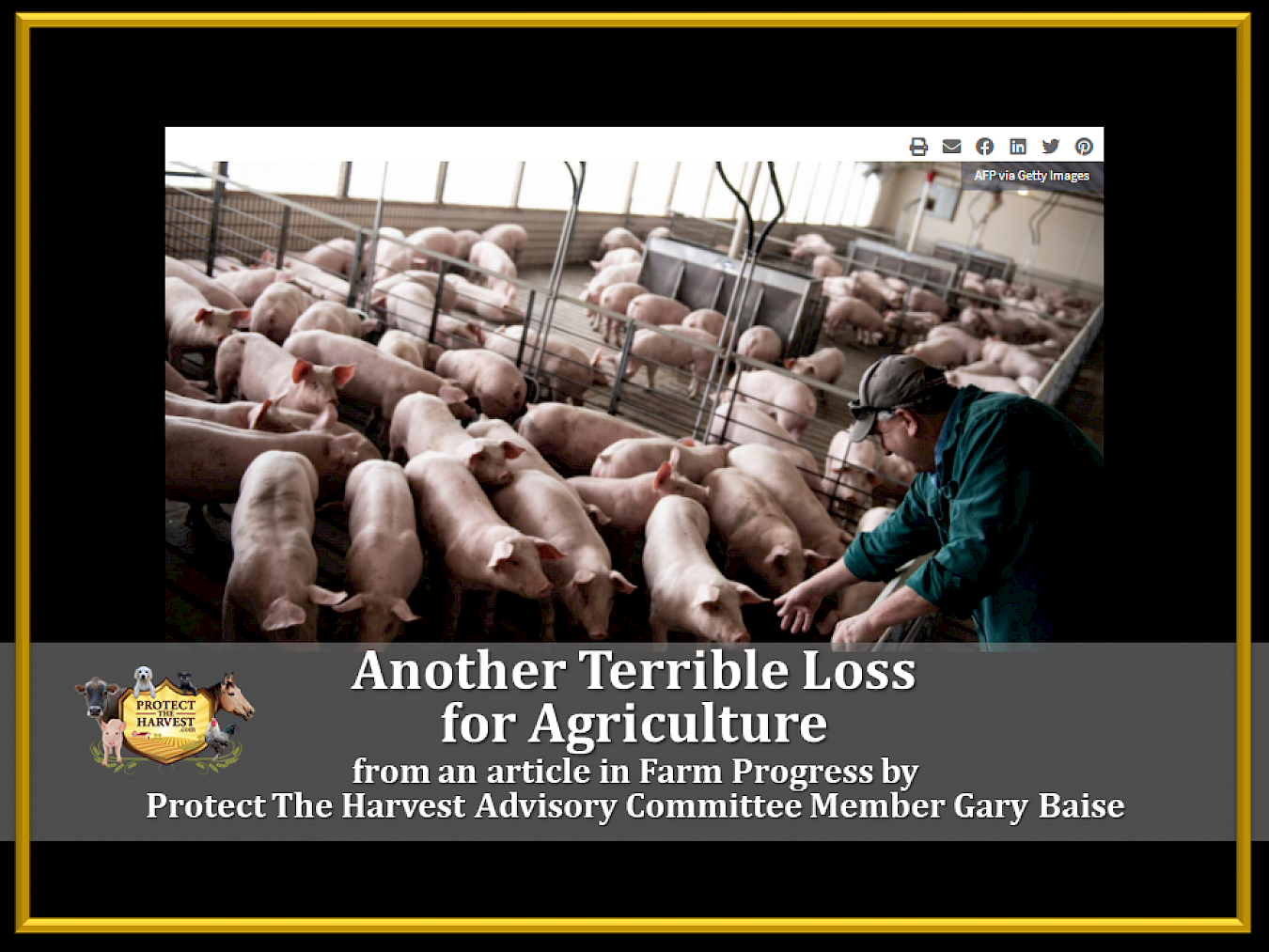 ANOTHER TERRIBLE LOSS FOR AGRICULTURE

On July 28, 2021, the U.S. Court of Appeals for the Ninth Circuit issued a 24-page opinion which said National Pork Producers Council (NPPC) and American Farm Bureau Federation (AFBF) lost on seeking to overturn California’s Proposition 12. Prop 12 is a state law that requires any pork sold in California to be raised based on that state’s arbitrary housing requirements. So, come Jan. 1, 2022, any U.S. hog farmer with sow herds will have needed to invest potentially millions to upgrade facilities to meet California’s arbitrary requirements.

Today an average barn might cost $1,600 to $2,500 per sow; Under California’s animal-confinement rules, compliant barns are “averaging as much as $3,400 per sow,” says Rabobank analyst Christine McCracken.

The two farm organizations said that Proposition 12 violated the U.S. Constitution’s Commerce Clause. But the Ninth Circuit said the two farm groups did not plausibly plead that Proposition 12 violated the dormant commerce clause because the California standards did not “…impermissibly regulate extraterritorial conduct outside of California’s borders.”

The Court further said “…the interconnected nature of the pork industry does not mean that Proposition 12’s extraterritorial impact violates the underlying principles of the dormant Commerce Clause.”

Added cost does not matter

It is clear the panel read the affidavits of pork farmers who will have to change their operations at great cost. The Ninth Circuit did not seem to care about this cost because it said “…that the complaint plausibly alleged that Proposition 12 has an indirect practical effect on how pork is produced…but such upstream effects do not violate the dormant Commerce Clause.”

It is hard to believe the Court has such little understanding of how pork is produced in this country. It cannot be because there were insufficient briefs explaining the harm California’s Proposition 12 will bring to American animal agriculture.

The Humane Society (HSUS) has once again imposed, through the courts and the State of California, its views on how American agriculture is to be conducted. Everyone from the U.S. Chamber of Commerce, the National Mining Association, the National Cattlemen’s Beef Association and numerous States Attorneys General attempted to convince the Ninth Circuit that it was wrong, but the three judges indicated all these Attorneys and states were wrong.

Circuit Judge Sandra Ikuta wrote the opinion which said the District Court of California “…did not err in dismissing…the complaint for failure to state a claim.” Judge Ikuta was appointed by President George W. Bush and attended the University of California at Berkeley. Judge Ikuta is also an active member of the Federalist Society which is a known conservative and libertarian organization. Judge Ikuta in a prior career, was in private practice for 14 years and was Deputy Secretary and General Counsel of the California Resources Agency. Judge Ikuta was confirmed by the U.S. Senate with an 81-0 vote.

As you can see, Judge Ikuta has no agriculture background of any kind. Judge Ikuta claimed that NPPC and AFBF did not plausibly plead that California Proposition 12 discriminates against the other states’ interest. She claims the two farm groups did not recognize that Proposition 12 has an impermissible extraterritorial effect. Judge Ikuta said, “At the motion to dismiss stage, we must determine whether the counsel has plausibly pleaded a dormant Commerce Clause claim under its theories.”

She is saying all the high-powered lawyers screwed up.

Judge Ikuta indicates that the main argument the NPPC and AFBF make is that California’s Proposition 12 has an impermissible extraterritorial effect.

Maybe the United States Supreme Court will take the farmers’ case. Let us hope so, in light of Judge Ikuta’s opinion.