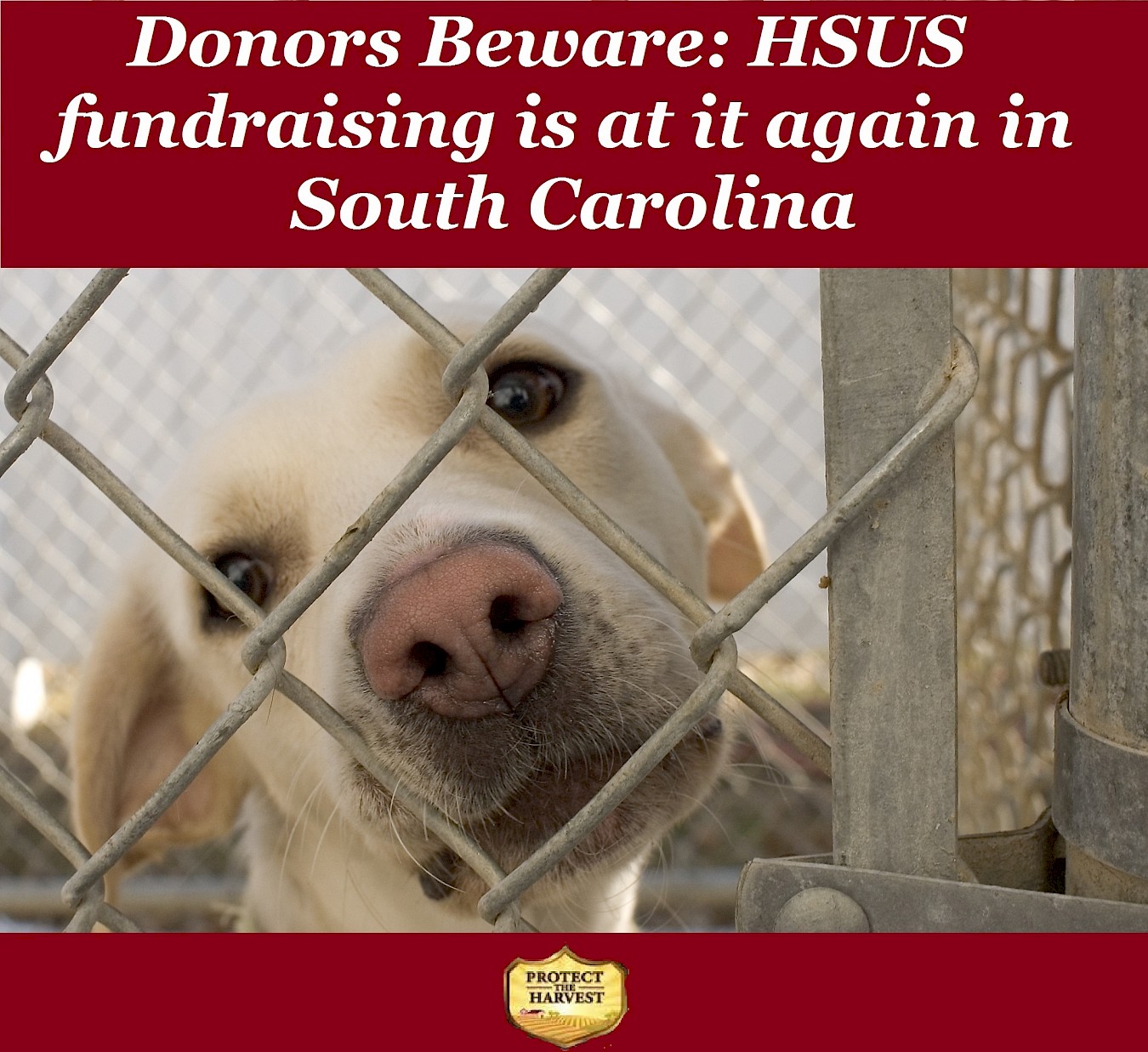 BE WARY OF HSUS FUNDRAISING IN SOUTH CAROLINA

It often requires the generosity of others to help lift a community up after a natural disaster. Whether it’s flooding on the east coast, tornadoes in the heartland, wildfires in the West, or any other tragedy that befalls a region, we must be there for one another. For many, that generosity extends to animals. Natural disasters have been known to cause much displacement among dog, cats, and other domestic animals, greatly impacting their lives. During these times, shelters can overflow with lost pets that are separated from their owners. One of the more recent disasters is currently taking place in South Carolina. Heavy rains brought about by Hurricane Joaquin have caused unprecedented statewide flooding. Rivers have risen dramatically and more than a dozen dams have failed to control the deluge. As this tragedy continues to cause suffering in the region, one group that is known to benefit from such events is at it again: Humane Society of the United States (HSUS). You may know HSUS from its work in exploiting thousands of donors in order to use their money for legislative, salary, and fundraising purposes instead of directly helping animals in shelters. That exploitation extends to disaster relief. HSUS likes to market itself as the frontline for animal relief in times of need, and as you’ll notice on its website, there are plenty of emotional appeals for you to help them in that effort by donating anywhere from 35 to 1,000 dollars, or more if you’re so inclined. We certainly don’t want to get in the way of any group that wants to help displaced animals, if their intentions are truly compassionate and not self-serving. That doesn’t seem to be case with HSUS, however. Their spotty track record when it comes to disaster relief situations is appalling. Look no further than New Orleans, where HSUS’s “relief” in the wake of Hurricane Katrina’s destruction was little more than fundraising abuse. It’s reported that the animal rights organization raised upwards of 34.6 million dollars to help animals there. That’s a spectacular amount of money which could be used to assist a region in dire need. Unfortunately, only 25-52% (depending on if your source is HSUS’s tax records or HSUS’s own reporting) of those funds were dispersed to Louisiana groups. If you think this was just one instance, think again. In Oklahoma, Attorney General Scott Pruitt issued a consumer alert and investigated HSUS following the group’s fundraising campaigns in the state after the Moore tornado strikes. The review by Pruitt’s office found little-to-no funds donated to HSUS actually went to their intended purpose of supporting local Oklahoma animal shelters. Investigations into HSUS’s shady business practices have become a nationwide trend. Currently, 11 Midwestern states’ Attorneys General are considering joining Oklahoma in the search for the truth behind HSUS fundraising. The Colorado Gazette reports that Colorado’s Secretary of State is also reviewing complaints against the group. This shows no signs of stopping. That brings us back to South Carolina. There are plenty of people and animals currently suffering who could use assistance. Find an organization with a reputable background, and give your money to them if you truly want to relieve the situation. HSUS has claimed to be taking a role in “leading the rescue efforts” of misplaced animals. Don’t let your willingness to help these animals cloud your judgment. Otherwise, you may find that your money has been “misplaced” into an HSUS bank account.