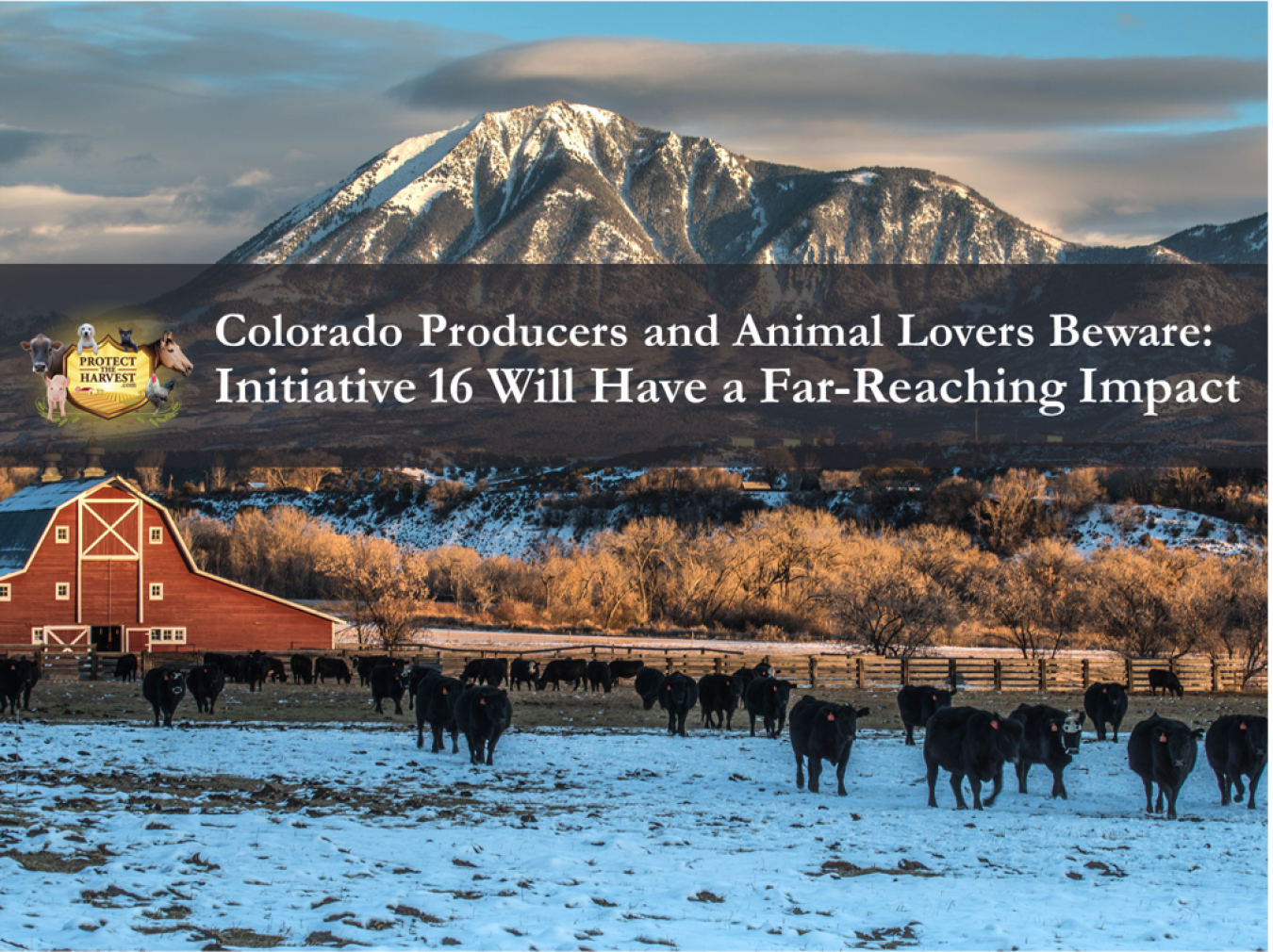 Colorado Producers and Animal Lovers Beware of Initiative 16 in Colorado

A recent ballot initiative being proposed in the state of Colorado is a serious concern for farmers, veterinarians, and other animal welfarists. The initiative, originally called Protect Animals from Unnecessary Suffering and Exploitation (PAUSE), has appeared before the title board after it was filed with Colorado’s Secretary of State. After a successful title board hearing, it is now called Initiative 16 in Colorado. This means that once enough signatures have been gathered, Initiative 16 will appear on the Colorado voting ballot for the general public to determine. Initiative 16 is penned and supported by two individuals who both have direct ties to well-known animal extremist groups, PETA and Direct Action Everywhere. If Initiative 16 passes in Colorado, the impact will be much farther reaching than most realize and will restrict providing care to livestock and other animals. Additionally, it will also impact the availability of animal byproducts used in countless everyday items, the availability of purpose bred pets, breeding horses, the cost of dairy products and other grocery store items, and even the cost of pet food.

Alarmingly, Initiative 16 calls for a change in criminal cruelty to animal statutes even though there are already protections in place for animals. Initiative 16 would expand animal statutes to include criminalizing certain animal husbandry practices, including procedures for common and routine animal care and management treatments. What is on the table? Section 1 of the initiative calls for amending (2), (2.9), and (5) of the revised statues 18-9-201 – plus the addition of article (3.5).

The change in (5) and (3.5) are the two most notable. Changing subsection (5) according to this new proposal would change “sexual act with an animal” so that it “also includes any intrusion or penetration, however slight, with an object or part of a person’s body into an animal’s anus or genitals.”
This also strikes out the current language that reads, “nothing in this subsection shall be construed to prohibit accepted animal husbandry practices,” and replaces it with “…to prohibit any person from dispensing care to an animal in the interest of improving that animal’s health.”

Essentially, this is a direct attack against common and accepted husbandry practices such as artificial insemination, palpation and pregnancy checks just to name a few. Such an inhibition would make overall management and production extremely difficult. It would even make veterinarians have to reconsider methods for treating their patients so they would avoid being criminalized.

Extending the Age of Processing – Impacting Sustainability, Animal Welfare, and Cost to Consumers

Adding a new subsection (3.5) would define the “natural lifespan” of animal species as the following: “a cow lives to 20 years, a chicken lives to 8 years, a turkey lives to 10 years, a duck lives to 6 years, a pig lives to 15 years, a sheep lives to 15 years, a rabbit lives to 6 years.”
Section 3 then goes on to incorporate this change by adding in another subsection (1.9) which reads as follows: “any person who slaughters livestock in accordance with accepted agricultural animal husbandry practices does not violate the provisions of subsection (1) of this section so long as the animal has lived one quarter of their natural lifespan based on species, breed, and type of animal and the animal is slaughtered in such a way that the animal does not needlessly suffer.” This would essentially mean that the age required for legal slaughter and harvest is greatly increased – which, in the case of cattle, would be a full five years according to the language in this proposed change.
Such a move would devastate not only farmers and ranchers, but also everyone involved with the livestock, meatpacking, feed, and protein industries through all levels. Subsequently, this would greatly increase the cost of animal protein products for consumers at the retail and food service levels.

Alexander Sage of Broomfield, and Brent Johannes of Boulder are the two individuals directly behind the penmanship of this proposal and its promotion. What might be inspiring their interest? Let us look at their backgrounds and affiliations.

Alexander Sage is hardly an animal welfare expert. According to his LinkedIn profile, he is currently a machine learning engineer, with work in data analytics and software development on his resume as well. His animal experience, however, includes being a Luvin Arms Animal Sanctuary volunteer since 2017 where he was “trained in animal care support.”

Sage also lists himself as co-founder of Colorado PAUSE where he says, “the focus of this campaign is to define animal abuse for farmed animals; while allowing for animal agriculture to exist.”

“To exist” is a broad term, but also tiptoes around the notion that many of the stipulations on the ballot would make many common animal husbandry and processing procedures nearly impossible.

This animal extremist establishment is well-known and has become common ground for some notable figures in the Colorado animal rights camp. Marlon Reis, the partner of Governor Jared Polis – who has recently come under fire for embracing a statewide “#MeatOut Day” discouraging meat consumption – sits on the sanctuary’s board.

Luvin Arms pushes a fully vegan diet and cites several other extremist groups in their information. They were also vocal supporters of the state’s recent Meat Out Day and promoted it on their platforms.

Luvin Arms is also the sanctuary that vegan and animal extremist Ellen Kessler, Polis’ pick for the Colorado Veterinary Medical Board, is heavily affiliated with. Kessler’s appointment has been of great concern for multiple groups, including the Colorado Livestock Association. In October 2020, Ellen Kessler personally reported on her social media platforms that she participated in a “disruption” at Costco with the radical group Direct Action Everywhere.

The other concerning co-founder on this ballot is Brent Johannes – a known PETA associate. He has been active in animal extremist work for some time. In 2019, he was one of the PETA representatives urging the Colorado State University President to end experiments done on crows.

A look through his social media likes and support shows his affiliation with other well-known animal extremist groups, including Direct Action Everywhere.

This type of animal extremist legal action is, unfortunately, not limited to Colorado. The vegan and animal extremist Jane Unchained recently released a Facebook video sharing that another proposed ballot initiative is coming soon for Oregon – the Initiative Petition 13.

The language is startlingly like what is on the Colorado ballot. It specifically targets animal husbandry practices, such as artificial insemination, as falling under the umbrella of sexual assault. The website’s about section is very telling in how it directly targets animal agriculture:

“This initiative would not ban the sale of meat, leather, or fur. It would, however, radically change how everyone treats animals, including those who work in animal agriculture. It would create a system in Oregon where farmers were no longer exempt from animal cruelty laws. It would require that animals be allowed to truly live a good life free from abuse, neglect, and sexual assault. After an animal lives a full life, and exits the world naturally and humanely, this initiative does not prohibit a farmer from processing and distributing their body for consumption.”

For good reason, true animal welfarists and those involved with animal agriculture find the wording and affiliations behind these actions to be extremely concerning. Shawn Martini, the Colorado Farm Bureau Vice President of Advocacy, voiced his concerns about the serious issues of directly criminalizing the tools producers and veterinarians use to efficiently and humanely produce food to fulfill consumers’ demand. “Anything you do, even if it is a generally accepted practice endorsed by the American Veterinary Medical Association, would still make you a criminal animal abuser,” he said in an article print in The Fence Post.

In the same article, Executive Vice President of the Colorado Cattlemen’s Association, Terry Fankhauser, also expressed his concerns. “If this were to make it onto the ballot, the consumers in the state who are accustomed to locally raised and processed beef and other proteins will have to make their voices heard,” he said. “This would ultimately result in greatly increased prices at the meat counter, potential limits on food availability, and would make feeding Colorado families much more difficult in already challenging times.”

And of course, the negative impact on the $7 billion state cattle industry and all its stakeholders and workers is something to be considered as well. A similar impact would also hit the state’s poultry, swine, and other animal industries. 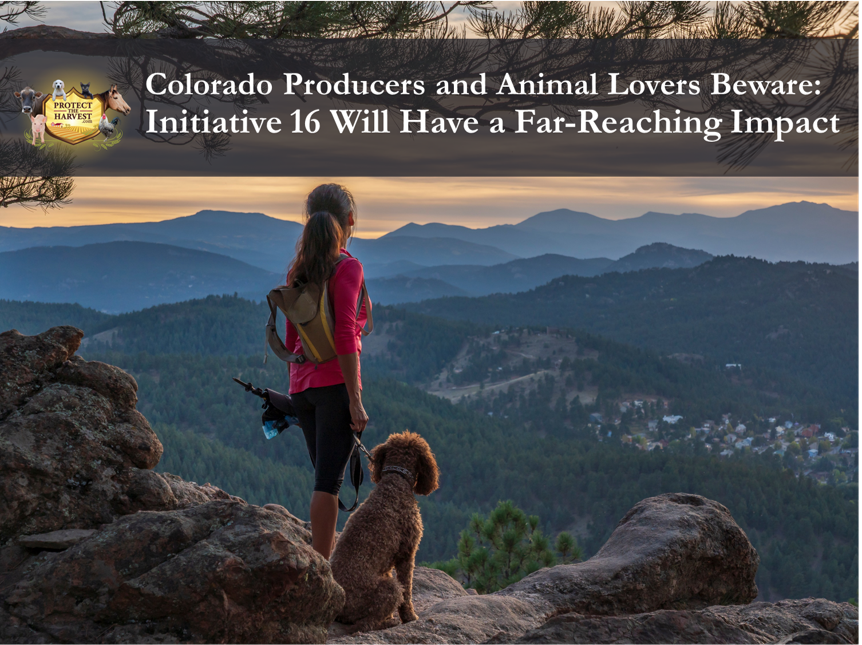 Veterinarians Have Issue With 16 Initiative– It Includes All Animals, Even Pets

It is not only the direct industries who have concerns. Those in the large animal veterinary field are also not happy with this ballot and its implications. Dr. Rosslyn Biggs, of Chickasha, Okla., is a large animal veterinary practitioner. She says the language used specifically targeting food animal species is an issue, but there are also implications for companion animals as well.

“This is undoubtedly going to hamper our ability to advance genetics in all species, including companion animals,” she tells Protect the Harvest. “The biggest concern I have is that as a practicing veterinarian, legislation likes this gives me pause as to whether a procedure I'm performing could be misconstrued as animal abuse. When in fact (what I do) is intended to create safer and healthier animals in all species.”

As such, Biggs notes these are issues all veterinarians, regardless of companion or large animal practice, need to be aware of and stand united on. This includes engaging with clients on issues that are occurring and building relationships with legislators. Veterinarians, she says, come from a point of science, training, and knowledge and can use that to better educate legislators and politicians on what true animal welfare looks like.

“Veterinarians, farmers, ranchers, have got to be at the table discussing what the real truth is behind the behind these (husbandry) practices and give their perspective,” she says. “We’ve got to tell our story and we need to do a better job of it.”

As this story continues to unfold, farmers, ranchers, industry professionals and other animal welfarists are encouraged to stay up to date with information provided by Protect the Harvest and similar entities.

As only 125,000 signatures are needed for the PAUSE changes to be put up for vote, it is very likely to be on the ballot in the near future. This makes it absolutely essential that those concerned about animal welfare and animal industries take action and give this issue due attention. News, education, and calls to action can be easily shared via social media and word of mouth to help uphold Colorado’s animal businesses.