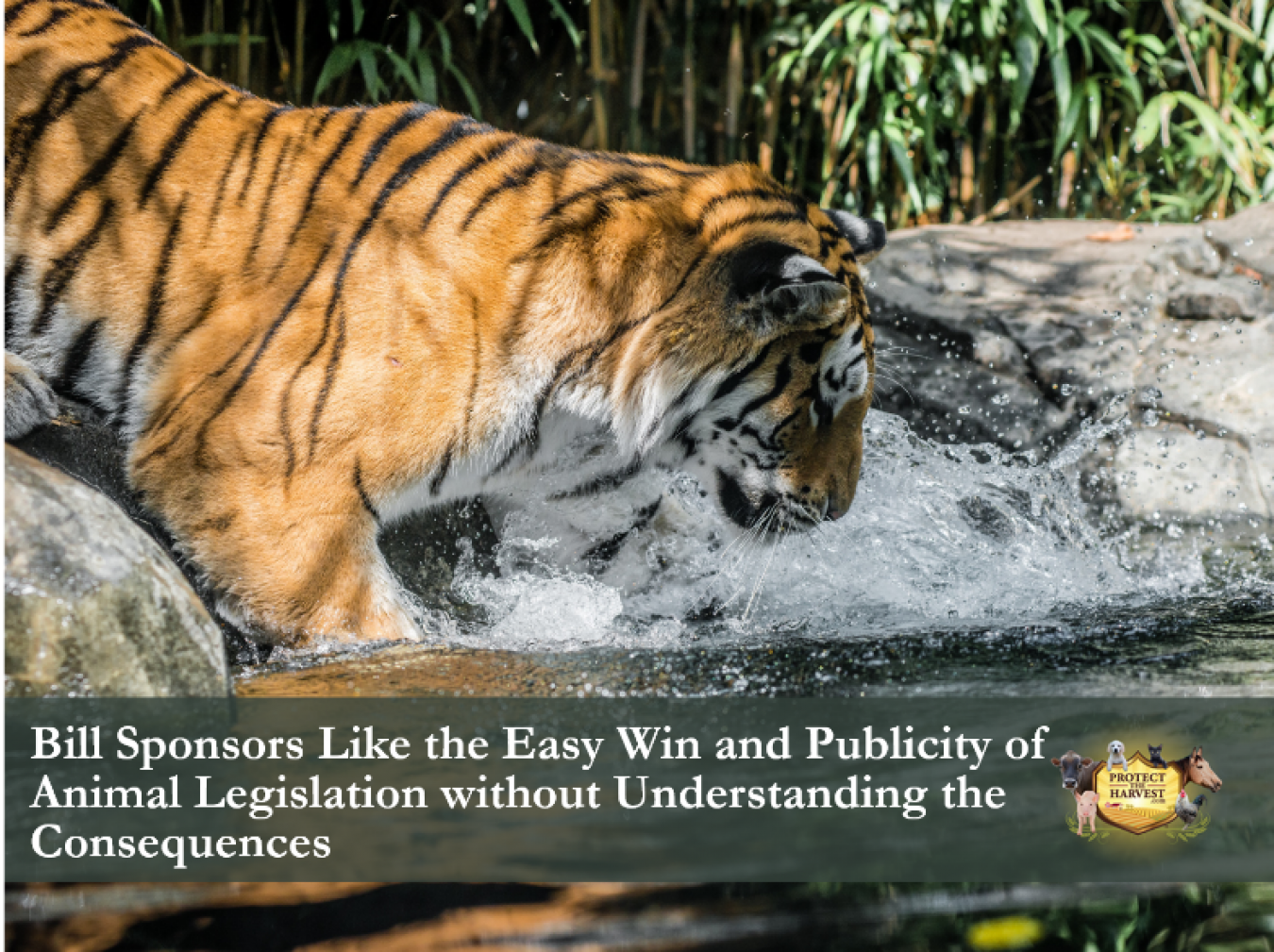 It’s becoming more and more common for legislators at both the state and federal levels to put forward animal-related bills that are fundamentally flawed. This isn’t necessarily because of their intentions behind the proposed legislation. It is happening because there are people trying to draft legislation impacting industries, they know nothing about. Writing laws and regulations from a position of ignorance will always have unintended consequences. Sometimes the overreaching consequences are simple errors. For example, when the legislators don’t understand a regulatory aspect, know that a definition for a term already exists, or know that a definition for a term has been changed.

These bills addressing zoo animal issues may be seen as a non-partisan, easy win for politicians. Lawmakers are often seduced by the publicity and support by animal extremists’ groups and clamor to sponsor this type of legislation. The Big Cat Public Safety Act is a prime example of “feel good legislation” that looks like a big win for animals but contains hidden and serious consequences. The activist groups that request the introduction of these increasingly frequent bills have worked long and hard to ensure the specific language used would achieve an entirely different goal than legislators may intend. It is also an example of where a clear goal has been garbled in drafting due to lack of specific industry knowledge by its sponsors. Each area of the bill text that is missing a definition or is vaguely drafted has the potential to impact businesses and animal welfare negatively. The negative result would affect both operations and budgetary capacities in ways that the current financial impact considerations outlined in the bill did not address.

Animal Extremist Groups’ Involvement in Language is No Mistake

When animal extremist groups become involved in legislation and drafting bills for animal industries overreaching language is not a mistake. Animal extremist groups purposely insert their own language to change the scope or breadth of a bill’s potential impact. They get away with this because legislators are not familiar with the industry and do not realize they are being manipulated so that these groups can achieve their own agenda.

The federal Big Cat Public Safety Act (HR1380) is a prime example of this type of bad legislation that is currently in Congress and possibly about to move quickly. The Big Cat Public Safety Act would potentially have a far-reaching impact on everything from how businesses with exotics function to conservation programs. Exactly how much overreach the bill could enact is unclear. This is because the bill is so vaguely written nobody can agree on what it would actually look like if implemented.

On the surface, the sponsors claim to have two goals with this bill:
• They want to improve public safety by regulating who can own big cats

• They want to end what they call the abuse of big cat cubs by ending so-called “pay to play” photo and petting experiences.

However, thanks to all the extraneous language that was inserted into both the definition section and the requirements that must be met to qualify for an exemption, that’s not all the bill actually does.

To start, some of the key terms within the text of the Big Cat Public Safety Act don’t even have definitions. This includes certain terms where the need for a solid understanding of what they mean seems like common sense. Here are some examples of vague terms: “in good standing” with the USDA, “public exhibition” and “commercial activity”. It is important to note that these definitions don’t actually exist in relevant legislation, which means they are open to interpretation by the agency promulgating the rule, or the individuals charged with implementing enforcement of it.

It is probable that the legislators who wrote this bill didn’t realize that defining those terms was necessary for implementing the bill. The actual impact of the bill as written would be subject to the interpretation of those undefined terms down the line. Without clearly defined terms in the language, there is no way to predict how many businesses the bill would affect and what parts of their operations would be required to change in order to comply with new regulations. Therefore, it is impossible to estimate the economic impact of the bill accurately.

Reality - Who Is The Public?

As written, the bill would force anyone owning big cats to keep all members of “the public” 15 feet away from big cats unless there’s the correct type of fencing (more on that below) in place. Who constitutes the “public”? Perhaps “the public” is everyone not employed by the business? What about the fact that most facilities managing exotic animals have volunteers and interns who work near animal habitats and aren’t on the payroll or covered by insurance as employees? What about contractors who are brought in to fix a fence? What about filmmakers working on a documentary about the animals? It is simply not clear who would count as “the public” and who wouldn’t. Classifying any non-employees as “public” would severely hurt most places keeping exotic cats, since in many cases those people would no longer be able to work directly with the animals or even near them.

Worse, the bill creates different categories for exempted entities. Each category has its own set of criteria that must be met to gain the exemption. The criteria for the categories are very unbalanced and could be called evidence of bias:
• Federally licensed businesses would have to jump through a lot of hoops to be able to have a big cat. Unless those businesses happen to be a college with a live big cat mascot.
• Sanctuaries that may not even be licensed or overseen by ANY entity would have virtually no requirements beyond agreeing not to breed or exhibit animals.
• It’s not even clear which sets of criteria some businesses would need to meet (like a sanctuary that is USDA licensed)
• It could be interpreted that businesses which fit into two categories would have to abide by the rules of both to get their exemption. Or they could decide which exemption to take in any given situation.
• The bill doesn’t actually cover what happens if a facility that has an exemption somehow loses its exemption. For example, a member of the public at a zoo jumps a fence to pet a lion, or a sanctuary has an accidental litter of cubs.
• The bill gives no guidance on what would happen to their animals in that situation, or when--if ever--they’d be able to get the exemption back. Perhaps that should be established before legislators vote on if it should apply to the businesses they represent?

Reality – Lack of Attention to the Details of Implementation

The lack of attention to the implementation details can be found throughout the bill. As mentioned earlier, the exemptions involve additional criteria that aren’t part of the federal licensing and oversight process. Those new “standards” businesses would be expected to adhere to didn’t go through the regulatory approval process. They have not been assessed by people who understand animal businesses to see if they posed an undue burden. They are standards that well-meaning legislators who don’t know anything about the welfare of big cats agreed to because they sounded good when proposed by lobbyists. The key here is that the lobbyists are being paid by animal extremist groups working to pursue their longer-term agenda of damaging the viability of exotic animal industry businesses. Either way, the “standards” are not logical. In many circumstances, it just isn’t clear what sort of impact the standards would actually have.

If this bill is passed, the public would have to be 15 feet away from all big cats at all times, unless there was a fence “sufficient to prevent contact” between them. The financial impact assessment for the bill that came out last month just references the requirement as one for a “permanent” fence. Nobody--including the bill sponsor or the lawmaker’s staffers --actually knows what type of fence that means. The new rule or standard could be interpreted to mean that the fence must be totally impermeable, like a concrete wall. The USDA allows chain link, panel fence and other types of fencing that adequately contain big cats. However, if a person came very near the fence or touched it, an animal may be able to bite or scratch through it. Any of these fence types could be considered sufficient until it didn’t prevent contact at some point. Depending on which interpretation is chosen for this requirement, hundreds of businesses across the country could be forced to not only remodel their animal enclosure fencing or public pathways, but also radically alter business operations.

Facilities might no longer be allowed to do demonstrations at heavily reinforced (but not solid) training walls with the public only a few feet away. The new regulations could also severely hinder or make impossible guest or donor tours of behind-the-scenes areas. This will impact any and all contractors, vendors and other non-employees working in off-exhibit areas.

In another example, the blanket prohibition against non-staff contact with big cats at commercial businesses would end the so-called “cub petting” the bill sponsors are worried about. However, this rule proposed in the bill fully overlooks the major role played by experienced volunteers who are trained in all aspects of animal husbandry. Medicating or training an animal often involves incidental physical contact. The cost of care for these animals is expensive and at most facilities volunteers play a vital role. These new regulations would require businesses to hire additional paid staff to take over the workload handled by volunteers. This would put a strain on the budget of any business.

If you are care about the preservation of big cats for future generations, contact your lawmakers and share with them your concerns about how the bill is written. It is also important for your representatives to learn about and understand the true ideology and agenda of the animal extremist groups pushing for its passing.