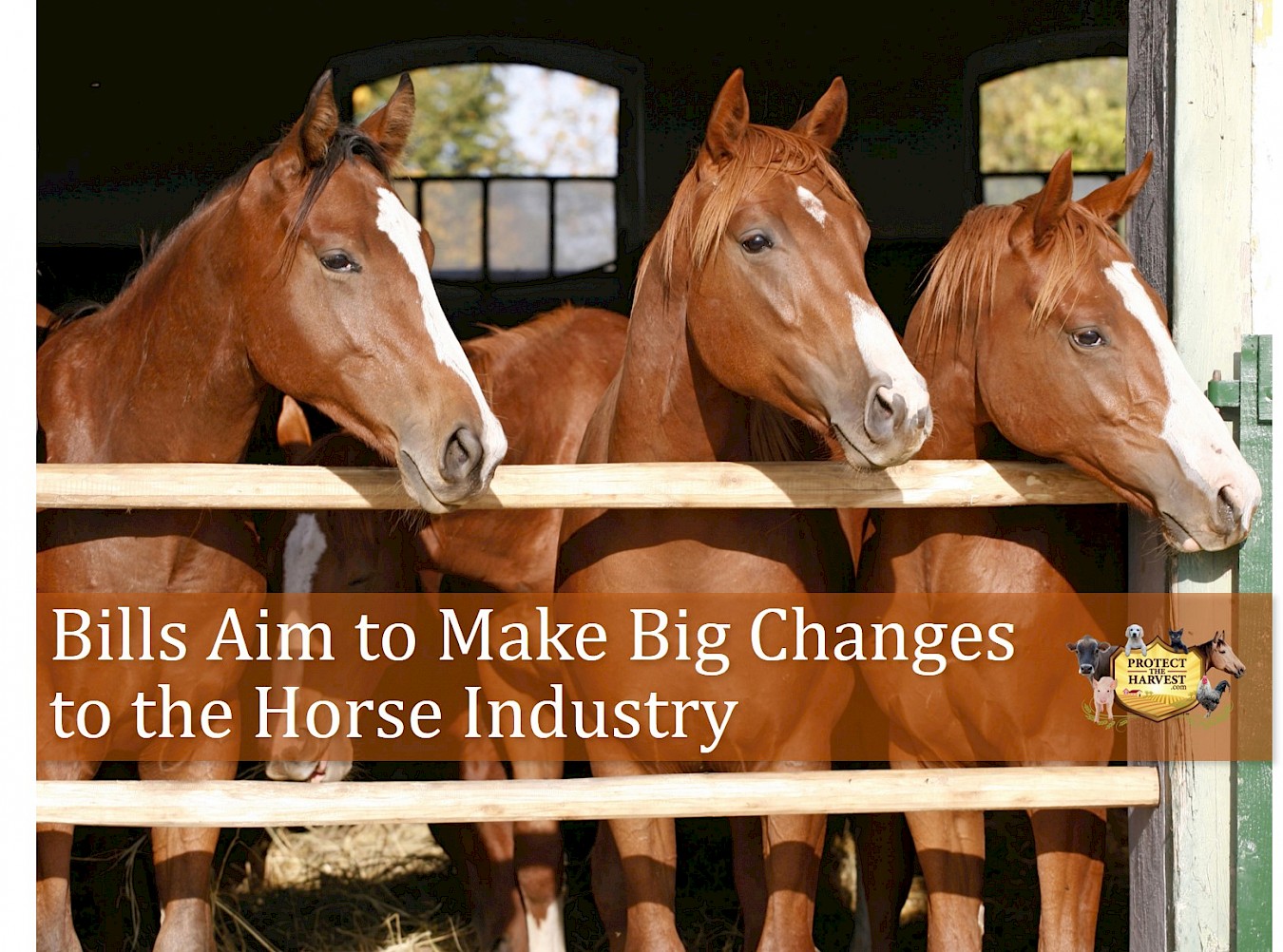 BILLS AIM TO MAKE BIG CHANGES TO THE HORSE INDUSTRY

Background – Horse Protection Act
The Horse Protection Act was passed in 1970 and outlawed the sale, transport, showing or auction of a horse that has been sored. This led to nearly a 95% compliance rate within the industry, which is overseen by U.S. Dept. of Agriculture inspectors and Horse Industry Organization inspectors.

Support for The Horse Protection Amendment Act
Protect The Harvest joins the American Farm Bureau, the Performance Show Horse Association and those involved with the Tennessee Walking Horses, Spotted Saddle Horse and Racking Horse breeds in support of H.R. 1157, also known as the Horse Protection Amendment Act. This bill was written by Representative Scott DesJarlais (R-TN) and reintroduced this year. The bill would create a single Horse Industry Organization (HIO) that would be responsible for enforcement of the Horse Protection Act (HPA).
The Horse Protection Amendments Act would make these changes to the Horse Protection Act:
- Create a single Horse Industry Organization to oversee compliance with HPA
- The HIO would be governed by a board consisting of two individuals appointed by the Commissioner of Agriculture of Tennessee and two individuals appointed by the Commissioner of Agriculture of Kentucky. These four board members would in turn appoint two representatives from the walking horse industry in consultation with the Walking Horse Trainers Association. These six board members would then appoint three additional board members.
- The bill directs the HIO to use ‘objective inspections’ when inspecting animals for soring tactics. These ‘objective inspections include swabbing or blood testing protocols. These science-based protocols must:
o “have been the subject of testing and are capable of producing scientifically reliable, reproducible results;
o “have been subjected to peer review; and
o “have received acceptance in the veterinary or other applicable scientific community.”
- The Horse Protection Act would be enforced by the Horse Industry Organization

Moving Away from the PAST Act – Legislation Proposed by Lawmaker With HSUS Ties
The PAST Act, otherwise known as the Prevent All Soring Tactics Act, was originally introduced in 2013 by Rep. Ed Whitfield with direct involvement from the Humane Society of the United States (HSUS), where Whitfield’s wife was employed. The PAST Act intends to add further restrictions to the Tennessee Walking Horse industry. It seeks to ban pads, weighted shoes and actions devices. It is important to note that there is no scientific evidence proving those devices harm the horses.
The PAST Act was reintroduced this year during the 116th Congress as S. 1007 and was sponsored by Sens. Mike Crapo and Mark Warner. Both senators were honored at the “Congressional Humane Awards” hosted by the Humane Society of the United States. The PAST Act – S.1007 aims “To amend the Horse Protection Act to designate additional unlawful acts under the Act, strengthen penalties for violations of the Act, improve Department of Agriculture enforcement of the Act and for other purposes.” Essentially, it is trying to create stricter enforcement of the Horse Protections Act and increase the fines associated with penalties. As we mentioned above, Protect The Harvest supports the Horse Protection Amendments Act instead due to its common-sense approach to maintaining animal welfare standards and plans to utilize scientific protocols to ensure compliance.

Implications of the PAST Act on the Performance Horse Industry
The PAST Act aims to further regulate an industry that already has animal welfare standards that are both clear and enforced. Major horse show organizations have rules and guidelines to dictate the care and handling of horses involved in their respective disciplines. As animal rights organizations continue to push for a world with no human-animal interaction, regulating performance animals out of existence is a key part of that plan. Animal welfare is and should be the highest priority at any event; however, Protect The Harvest also believes that preserving our ability to own and enjoy those animals is also extremely important.

The PAST Act is Pushed by Animal Rights Organizations
The PAST Act 2019 is being pushed by the animal right’s movement, specifically the Humane Society of the United States. One of the changes proposed includes an amendment to the Horse Protection Act that would reinstate the ability for the Animal and Plant Health Inspection Service of the Department of Agriculture to publish personal information of citizens who violate this act on their public website. This is something animal rights groups have pushed for since those reports were taken off their website in 2017. They held inspection records and annual reports for every commercial animal facility in the U.S.—including zoos, breeders, farms, and laboratories. As well as included a variety of documents like: information about USDA license holders, official warnings, settlements made before trial, administrative complaints, inspection reports, research facility annual reports, as well as licensing information about breeders.
When that information was taken down in February of 2017, it was a huge relief to researchers, breeders, exhibitors, and livestock owners. Animal rights extremist groups like the HSUS and PETA used the lists and information available on the USDA-APHIS website to target, harass and in a number of cases, commit terrible crimes against animal owners. Although it is important for those who violate the Horse Protection Act to be held accountable for their actions, their personal information should not be published publicly, which could make them vulnerable to harassment.
For more information about the changes to the USDA-APHIS website: https://protecttheharvest.com/news/animal-rights-extremist-groups-upset-about-usda-announcement/

Safeguard American Food Exports (SAFE) Act – H.R. 961
The SAFE Act calls for the prohibition of horse processing for consumption in the United States as well as prohibits the exportation of horses for the same reason. In 2006, Congress pulled funding for USDA inspections of horse processing plants. This action closed processing facilities in the United States because there were no USDA inspectors available to oversee animal welfare and horse product production. Since then, every year nearly 100,000 unwanted horses (usually chronically lame, dangerous, old, or sick animals) are shipped to Canada or Mexico for processing where there is no USDA welfare oversight.
The SAFE Act bill aims to outlaw the sale of horses to other countries where their use is intended for processing. The passing of this bill brings up serious and unanswered questions about where unwanted horses would end up.

Protect The Harvest has been a proponent for the reopening of USDA inspected processing facilities so that the they can ensure the animals are treated humanely throughout the harvesting process.

Coming Together on Behalf of the Horse Industry
It is important to pay attention to legislation that effects the horse industry. When pushed by animal rights organizations, it is particularly important to further investigate and consider their ultimate goal – removing animals from human care. With both the PAST Act and the SAFE Act, we know that their aim is to make owning and showing horses more difficult with the hopes that one day it will be eliminated completely.