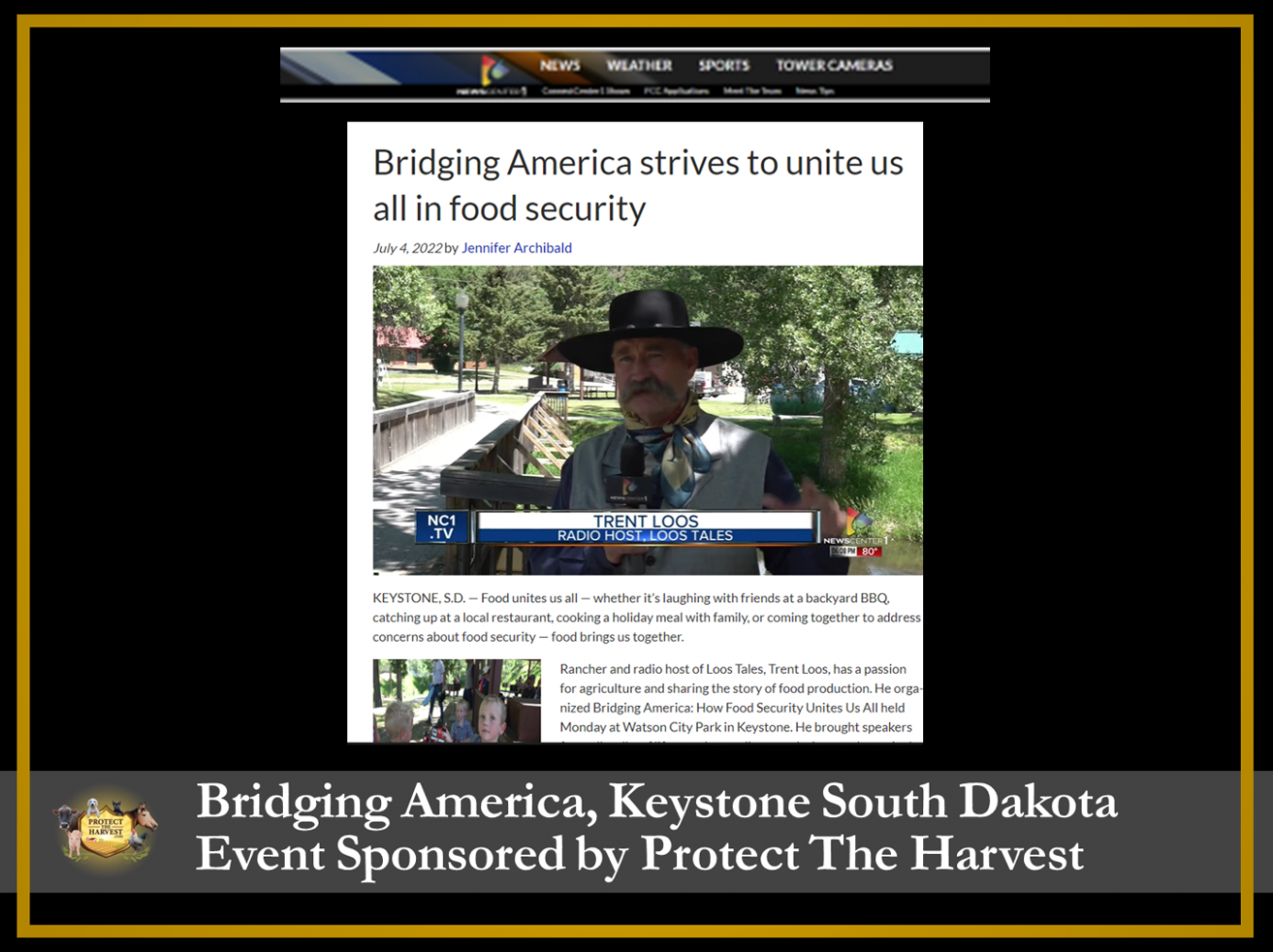 KEYSTONE, S.D. — Food unites us all — whether it’s laughing with friends at a backyard BBQ, catching up at a local restaurant, cooking a holiday meal with family, or coming together to address concerns about food security — food brings us together.

Rancher and radio host of Loos Tales, Trent Loos, has a passion for agriculture and sharing the story of food production. He organized Bridging America: How Food Security Unites Us All held Monday at Watson City Park in Keystone. He brought speakers from all walks of life together to discuss solutions to the nation’s current problems facing food security.

“We wanted to name it Bridging America because the moral of the story is that we’ve become so divided, we become so divisive with even in our own families. And so rural and urban. I’m sixth generation United States farmer. We have people here from urban America. And I thought how appropriate that we have an event called Bridging America when we come together at a time when food security is a challenge,” said Loos.

The event was sponsored by Protect the Harvest, an organization founded to promote agriculture, land use, animal ownership and hunting and fishing.

Food security is critically important to everyone. It’s not only the ability to produce food and distribute it better, it’s also about creating stability during fluctuations such as increased fuel prices, drought and inflation.

The global population is skyrocketing, it is estimated that by 2050 there will be over nine billion people on the planet. Experts estimate that in order to feed all those people, we will need to double our food production, using the same amount or less of land and resources than we do today. Loos believes that the very techniques and technologies that have allowed food producers to keep up with current demand are under constant attacks from misguided activists and uninformed government bureaucrats; using tactics ranging from producing misinformation to scare and manipulate the public, to pushing for legislation and regulations that have undisclosed, far-reaching consequences.

“This is a continuation of an event that was started last year where 1,300 people gathered to celebrate at the Arise USA Tour. And today we’re really going to focus in on food security. Food security is national security. And we see a crippling of our infrastructure supply chain disruptions and we want to provide people with solutions and empower them to protect their families and build a community and a network to ensure that that South Dakota remain and the nation remains strong.” said Radke.

Loos said it is important to recognize the challenges in food security.

“We have a significant number of food plants in the infrastructure of the food system from farm to fork that have been crippled in the past two years. We also have an executive order signed on January 27, 2021 by Biden which was about crippling and eliminating the fossil fuel business. And people today know that they’re paying twice as much as they were for gas January of 2021. But I don’t think they put into context how that has a crippling effect on agriculture and food supply. As we continue to put fuel out of the range of people to be able to buy fuel, to irrigate crops, to transport crops, to the production facility, from the production facility, to the processor, from the processor to the distribution center, the distribution center to the grocery store, all of that takes fuel. Unless you want to just go back to producing all your food we need to really be on top of what the key drivers are in making the fuel business so tough and how the federal government is putting priorities over fairy shrimp instead of producing food,” said Loos.

We empower people to engage in food systems and engage in their county politics because all politics are local. We tend to always focus on what’s happening in the Oval Office. We need to get back and focus on what’s happening at the county. Engage in county commissioner meetings, engage in school board, and you stand up and be heard. That’s what bridging America is all about. It falls in line with everything we’re talking about doing here, empowering people to take their lives back. We have too many people sitting back waiting to see who’s going to do what. For me, it’s time you say this is our time. This is our time to take a stand and be the one that makes a difference,” said Loos.

Access to quality, nutritious food is fundamental to human existence. Food security is important to ensure that everyone has enough to eat and families can build their communities without worrying about securing their lives. Secure access to food can produce wide ranging positive impacts, including — economic growth and job creation, poverty reduction and improved health and healthcare.