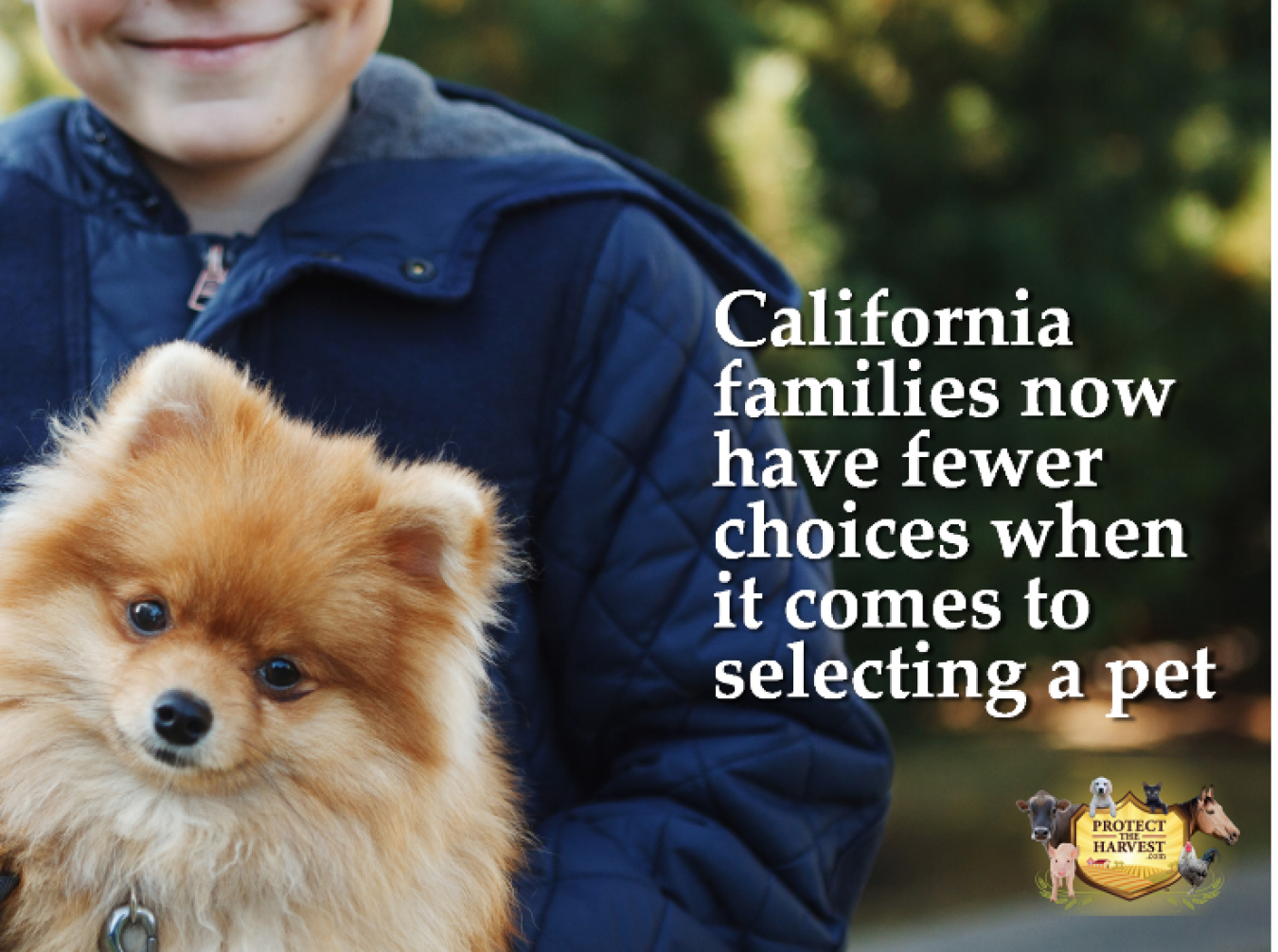 We Support Shelters but not the Elimination of Choices

We support the great work that many local shelters and rescue groups do in helping to care for animals in need and finding them homes. We encourage those who want to help pets in their community to look into the groups in their area and to give locally. However, we do not support laws that discourage pet ownership by eliminating choices.

On October 14th, 2017, Governor Jerry Brown (Dem) of California signed Assembly Bill 485 into law. This new law mandates that all dogs, cats and rabbits sold in pet stores must come from rescues or shelters, rather than federally licensed breeders. Pet stores will also face a $500 fine if found to be selling animals from commercial breeders. It does not however, at this time, prohibit individuals from buying animals directly from commercial or hobby breeders. We feel that this is a huge step towards losing our right to choose where our animals come from.

This bill passes at a time when California is receiving tremendous pressure from animal rights groups on multiple fronts. Not only did they sway California’s large population into thinking that this bill was in the name of animal welfare, but those who took the time to become informed on the actual implications of this bill, realized that it was just another way for them to chip away at animal ownership.

The Numbers Don’t Add Up

Judie Mancuso claimed that this bill would save “millions of lives”, but the numbers just don’t add up. In 2015, there were approximately 285,000 puppies produced by federally licensed breeders in the entire nation. That number is a small fraction of what she is claiming. This is also assuming all the dogs provided by commercial breeders were going to California pet stores, which they were not. It is also important to know that California does not have any USDA licensed breeders located within it.

Where Are California Pets Going to Come From?

Patti Strand, of the National Animal Interest Alliance, explains that the number of “replacement animals”- the animals wanted by the American public each year to replace deceased or retired animals - is much higher than the number of animals born each year. This means we have a shortage of animals that are available to be placed. She stated that “…you can tell from a historical decline that rescues are getting their dogs elsewhere”. The term “elsewhere” brings up another important aspect. The importation of dogs (from other states or countries) has skyrocketed as our demand for dogs is higher than the local supply.

Dogs Are Now Coming from Less Than Ideal Situations

To meet the demand, rescue groups are importing dogs that may be coming from less than ideal situations. These animals are often poorly socialized, aggressive, and fearful. Some of these imported dogs are bringing diseases that previously were eradicated from this region. In addition to this, foreign dogs have been imported that have exposed California dogs to new strains of disease. For example, this spring there was an outbreak of Asian strains of Canine Influenza in the Los Angeles area and since then, additional dogs have been diagnosed with the disease.

When this bill was signed, Californians allowed their consumer protections, when it comes to buying a new animal from pet stores who obtained animals from commercial breeders to disappear. Pet Purchase Protection laws in California state that if an animal becomes ill within 15 days of purchase or presents with hereditary or congenital defects within a year of purchase, the consumer has an ability to get a refund of the purchase price or assistance with veterinary bills. The same cannot be said when purchasing a dog from a shelter or rescue. Often the dog is “adopted” (sold) with a contract stating the pet is being purchased “as is”.

Rescue organizations have few regulations, especially in California, and they are untaxed. In Los Angeles county alone, “retail-rescue” is estimated to be worth over $500 million dollars. The bottom line is that animal rescue used to be a “labor of love” but now, it’s big business.

What Can We Do?

The bill has already passed in California and similar bills have passed in cities and counties around the country. Use California as an example of how misinformation can fool those who are simply misguided. We urge you to educate yourself and everyone around you so that it doesn't happen in your city, state or county as well.