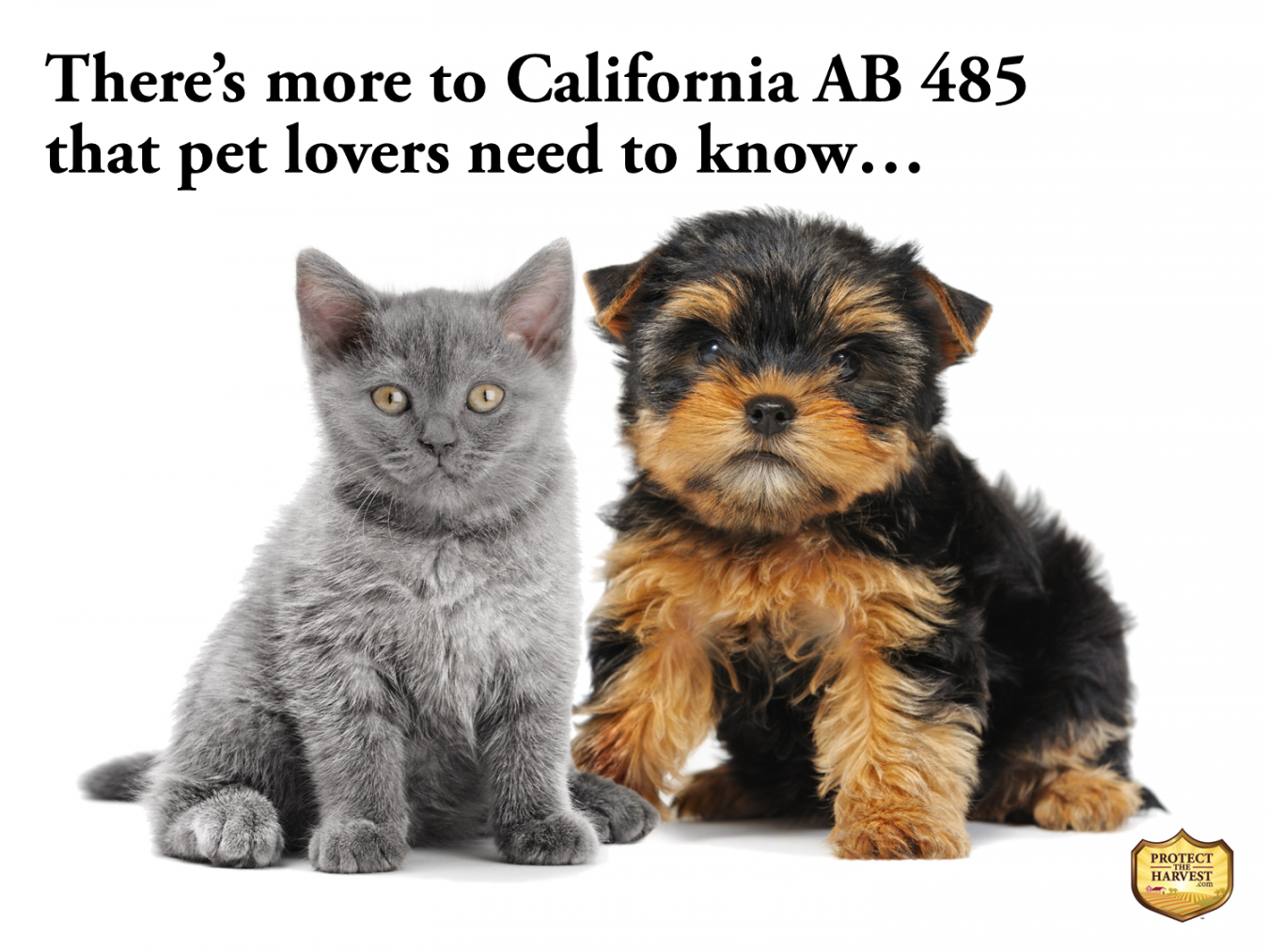 Wednesday, May 17th, California AB 485 was passed by the State Assembly Appropriations Committee. The bill forces pet stores to only sell dogs, cats and rabbits from rescues and shelters. It will make it illegal for pet stores to sell animals from licensed and regulated breeders. This is not good news. California AB 485 essentially takes choices away from pet owners. They will no longer have the ability to visit a pet store and select a pet for specific traits that best suits their lifestyle. Unlike USDA licensed breeders, shelters and rescues are not regulated. There is no animal welfare oversight. The only requirement, should they choose to claim non-profit status, is to file a 501c3 with the IRS and submit yearly tax information via the IRS Form 990. By restricting pet stores to only selling animals from shelters and rescues, Californians will not have the consumer retail protections and guarantees as they once had when purchasing purebred pets from pet stores.

This is a cookie-cutter agenda pushed by animal rights extremist groups (and not just in California, this is being pushed in other states too). It is another way extremists are attacking ethical breeders, pet stores and pet owners in their quest to end animal ownership. Their campaigns start with inflammatory and untruthful allegations about unethical breeders selling to pet stores. They are essentially name calling and slurring everyone who owns, breeds, shows or sells a purebred pet. Their claims are ridiculous because California pet stores have strict regulations about where they source purebred pets. Meanwhile, shelters and rescues have no regulations or oversight. Proponents of California AB 485 have also made unsubstantiated and incorrect claims about animal population issues. Meanwhile, they are convincing the public that selling “rescue pets” in pet stores and making it illegal to sell pets obtained from breeders is the answer to their claims. Stripping away the rights of consumers will not reduce the number of California pets that need homes when thousands and thousands of “rescue” dogs are imported from out of state and foreign countries.

Unfortunately, “rescuing” animals has become a big business. It provides animal rights extremist organizations like the Humane Society of the United States with dramatic media content for their unethical fundraising campaigns. Then there are groups that “rescue” animals and turn around and sell them to “adopters” at high prices. There’s a name for this recent business trend, “retail rescue”, and it generates a huge income for unscrupulous groups that are in it solely for profit. A recent study of Southern California rescues and shelters shows some alarming data:

These big numbers bring up concerns about animal welfare since there is no oversight and there does not seem to be a plan or budget to implement a program that protects the consumer or the animals that are in the “retail rescue” pipeline. Don’t get us wrong, we are not against helping animals in need, or supporting local shelters that are helping animals in our communities. However, we are against stripping away the rights of pet owners and eliminating their choices. We are also against destroying the livelihoods of ethical, law abiding breeders and pet store owners because some legislators have been sold a boat-load of untruths and propaganda. There is no logic in making it illegal for pet stores to sell pets that come from licensed and regulated breeders and then in turn, opening up a pipeline for an unregulated industry. What’s worse is that this is happening in order to solve a problem that doesn’t even exist in the first place.

If you are a California resident concerned about CA AB 485, here’s a link to information to contact your state representative: http://assembly.ca.gov/assemblymembers

CBSLA News Story about a fake rescue in California

Article by NPR about importing dogs

Link to an article about the income data