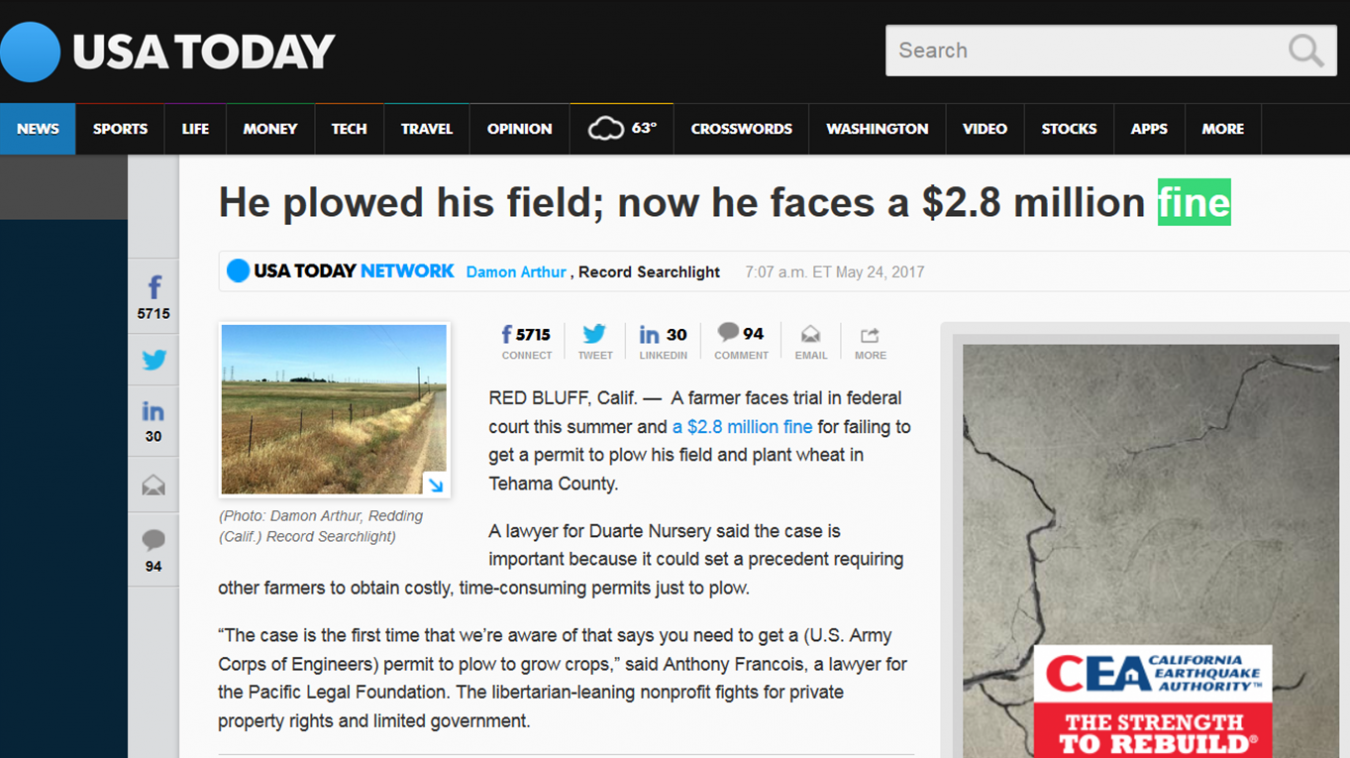 CALIFORNIA FARMER IS FIGHTING BACK

California Farmer is Fighting Back

USA Today published an article about how California Farmer, John Duarte is fighting back against the punitive actions of the Army Corps of Engineers and the Department of Justice. His family farm is on the line and if he loses, agriculture loses too. This case could set a dangerous precedent that can pose a threat to agriculture, farming and landownership. The fact that Duarte’s case caught the eye of USA Today and has become a national story shows that it is significant. This is a clear case of government overreach and it needs to be addressed. He has done nothing wrong. When he stood up for himself the Army Corps of Engineers became aggressive, spending over one million in tax-payer funds to go after him.

This has been a long and expensive fight for the Duarte family. There is a lot on the line. Duarte Family Nursey employs 630 people in the California Central Valley. If Duarte loses this case, or if his family business continues to be tied up in costly litigation, and they have to close their business, those 630 jobs will be gone. As of March, 2017 they have spent $1.6 million on litigation costs and are facing millions in fines. A Gofundme titled, “Duarte’s Nursery Stands Up’ has been established. We support John Duarte and you should too. We encourage everyone to step in and help. Link to Duarte Nursery GoFundMe: https://www.gofundme.com/Duartestandsup

USA Today - USA Today NetworkDamon Arthur , Record Searchlight 7:07 a.m. ET May 24, 2017 RED BLUFF, Calif. — “A farmer faces trial in federal court this summer and a $2.8 million fine for failing to get a permit to plow his field and plant wheat in Tehama County. A lawyer for Duarte Nursery said the case is important because it could set a precedent requiring other farmers to obtain costly, time-consuming permits just to plow. “The case is the first time that we’re aware of that says you need to get a (U.S. Army Corps of Engineers) permit to plow to grow crops,” said Anthony Francois, a lawyer for the Pacific Legal Foundation. The libertarian-leaning nonprofit fights for private property rights and limited government. “We’re not going to produce much food under those kinds of regulations,” Francois said. However, U.S. District Judge Kimberly J. Mueller agreed with the Army Corps in a judgment issued in June. A trial, in which the U.S. Attorney’s Office asks for $2.8 million in civil penalties, is set for August. The case began in 2012 when John Duarte, who owns Duarte Nursery near Modesto, Calif., bought 450 acres about 10 miles south of Red Bluff. “The case is the first time that we’re aware of that says you need to get a (U.S. Army Corps of Engineers) permit to plow to grow crops.” Anthony Francois, Pacific Legal Foundation Duarte planned to grow wheat there, according to Francois and court documents. Because the property has numerous swales and wetlands, Duarte hired a consulting firm to map out areas on the property that were not to be plowed because they were part of the drainage for Coyote and Oat creeks and were considered “waters of the United States.” Francois conceded that some of the wetlands were plowed but not significantly damaged. He said the ground was plowed to a depth of 4 to 7 inches. The Army Corps did not claim Duarte violated the Endangered Species Act by destroying fairy shrimp or their habitat, Francois said. This particular freshwater species is unique to California and southern Oregon and has been classified as a threatened species since 1994 because much of its wetlands in California's Central Valley were converted to cropland or became urban. Duarte's wheat was planted but not harvested because in February 2013 the Army Corps of Engineers and the California Central Valley Regional Water Quality Control Board issued orders to stop work at the site. The agencies claimed Duarte had violated the Clean Water Act by not obtaining a permit to discharge dredged or fill material into seasonal wetlands considered waters of the United States. Duarte sued the Army Corps and the state, alleging they violated his constitutional right of due process by issuing the cease and desist orders without a hearing. The U.S. Attorney’s Office counter-sued Duarte Nursery to enforce the Clean Water Act violation. Farmers plowing their fields are specifically exempt from the Clean Water Act rules forbidding discharging material into U.S. waters, Francois said. However, the tractor was not plowing the field, according court documents filed by the U.S. Attorney’s Office in Sacramento. Rather, it was equipped with a ripper that had seven 36-inch shanks, which dug an average of 10 inches deep into the soil. Duarte disturbed portions of the property that included wetland areas, the U.S. attorney alleges. The ripping deposited dirt into wetlands and streams on the property in violation of the Clean Water Act, according to documents filed the U.S. attorney filed. Assistant U.S. Attorney Gregory Broderick said he could not comment on the case and referred questions to his office’s public affairs department, which did not return phone calls. However, documents filed in court explain some of the rationale behind the government’s case. “Even under the farming exemption, a discharge of dredged or fill material incidental to the farming activities that impairs the flow of the waters of the United States still requires a permit because it changes the chemical, physical and biological integrity of the waters,” the U.S. attorney said in court filings. The creeks also flow into the Sacramento River, home to endangered chinook salmon. In addition to civil penalties, the U.S. Attorney’s Office is also asking the judge to order Duarte to repair the damage to the wetlands, including smoothing out the soil and replanting native plants in the wetlands. He also may be required to purchase other wetlands to compensate for the alleged damage to the property south of Red Bluff, according to the government’s proposed penalties. Francois said he thought the proposed penalties were unfair. His client thought the plowing exemption allowed him to till the soil. “A plain reading of the rules says you don’t need a permit to do what he did,” Francois said. “How do you impose a multimillion penalty on someone for thinking the law says what it says?””

Link to Complaint for Declaratory Judgement and Injunctive Relief

Prev Article
What the Closure of the Circus Means:
Next Article
Guest Blog - How Radical Animal Rights Groups Push Their Agenda