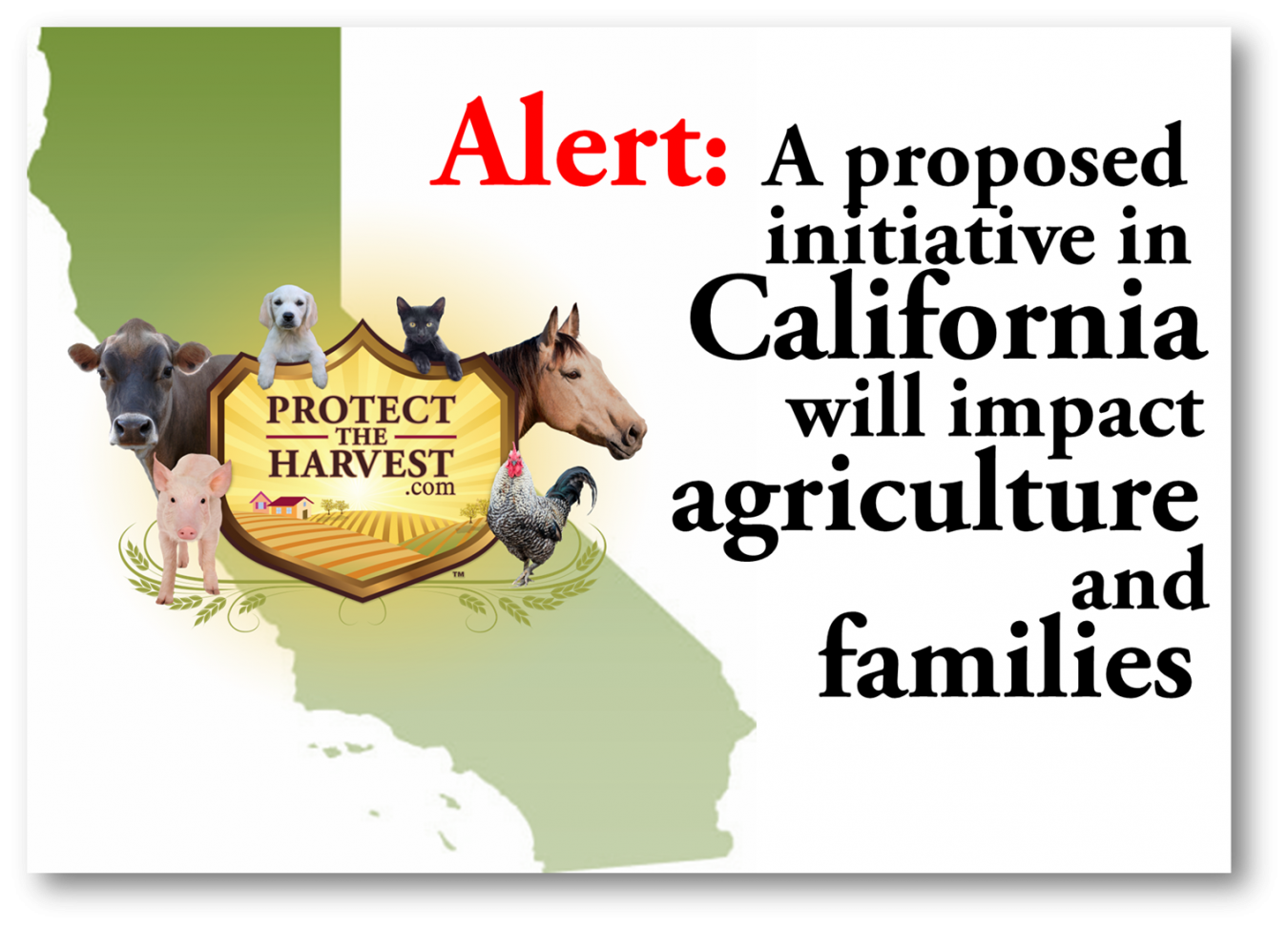 NEW INITIATIVE IN CALIFORNIA AIMED AGAINST ANIMAL AGRICULTURE AND FAMILIES

Who is Behind This Initiative?

The organizations that are behind Prevent Cruelty California have a very specific agenda. They aren’t groups that are interested in animal welfare; their true goal is to end all animal ownership including animal agriculture and animal food products. They are animal rights extremist groups. Cheri Shankar filed the “Prevention of Cruelty to Farm Animals Act” on August 29th, 2017. Shankar is on the HSUS National Council and is also a board member of the Humane Society Legislative Fund. Members of the Prevent Cruelty California Coalition include: The Humane Society of the United States (HSUS), American Society for the Prevention of Cruelty to Animals (ASPCA), San Francisco Society for the Prevention of Cruelty to Animals, San Diego Humane Society, Marin Humane, Center for Food Safety, Mercy for Animals, The Humane League, Compassion in World Farming, Animal Equality, Compassion Over Killing, Animal Protection and Rescue League, Humane Society Veterinary Medical Association, and Farm Forward.

Adding it to the Ballot

All Producers & Consumers Will Be Affected

The percentage of pork producers in California is low, providing only 2% of the nation’s total. This means the new initiative will greatly impact farmers in other states that ship their product into California. This is significant because 12% of the population in the United States resides in California. This initiative will create a massive financial stress on the pork industry that the consumer will, without a doubt, have to absorb. In an article by Feedstuffs, the National Pork Producers Council (NPPC) stated: “If all pork producers were forced to abandon gestation stalls, it would cost the pork industry between $1.9 billion and more than $3.2 billion to transition to an alternative housing system.” To make matters worse, California has the highest poverty rate in the Nation. This initiative would be hitting consumers, especially those that are at the poverty level, where it really hurts. A 2016 study by Cornell University showed that during the first 10 months after banning battery cages in California (Proposition 2), the cost of a carton of eggs increased by $1.05. A 2015 article in Capital Ag Press reported that a carton of eggs in California soared well above the $3.00 per carton mark. That may not seem like much to un-empathetic animal rights extremists, but to a struggling single mother it makes a huge difference. The 2015 Capital Ag Press article also reports that since the passing of Proposition 2, egg production in California has dropped significantly showing a loss in production of 78 million eggs from 2014 to 2015 alone.

Cage Free Initiative Does Not Equal a Better Product

There are significant welfare consequences that the animal rights extremist groups are ignoring. “Cage free” farming and eliminating stalls does not equal a better product or an improvement in animal welfare.

Chickens kept “free-range” are more prone to diseases, parasitic infections, and being attacked by other birds. The Coalition for Sustainable Egg Supply’s study found that cage-free chickens have higher rates of cannibalism, aggression, mortality, and keel damage. There is also a significant concern regarding indoor air quality, which poses an issue for both the workers and animals. The same study also reported that the total capital cost for a dozen eggs was 179% higher than conventionally raised chickens.

Sows naturally isolate themselves from their groups and set up a nest before farrowing (giving birth). In studies, wild sows will travel up to 1-4 miles away and stay isolated for up to 10 days. Other than occasional foraging for food, sows remain very inactive during that time due to the fact that pigs only produce milk for about 15 seconds every 45 minutes. Gestation and farrowing crate systems were created to keep the sow and piglets as healthy and safe as possible; just like the sow would keep them isolated in the wild.

Veal stalls and hutches allow the farmer to pay more individual attention to each animal so they can monitor feed intake and health. Stalls and hutches also keep food sources clean, which prevent fecal contamination and disease transmission. They allow the farmer to react as soon as they see an issue instead of waiting until the calf is blatantly ill.

Make no mistake, if we do not speak up and spread the word, the rug is going to be pulled out from under California families, and farmers and ranchers both in state and nationally. The HSUS has set up a big marketing machine to attack both agriculture nation-wide and families in California. We at Protect The Harvest are mounting a campaign to counteract this misguided initiative that will have a dramatic impact on families in California and farming across the nation. You can help us in this fight by donating to our Protect The Harvest fund, “Protect California Families and Ag Producers”. Protect The Harvest is a 501 c(3) non-profit organization. Our mission is to protect our freedoms by educating and informing America’s consumers, businesses and decision-makers about the activities of extremist groups and the threats they pose to our way of life. Link to donate: igfn.us/f/1jp0/n In addition to donating, there’s more you can do. Spreading the word and sharing our message over social media is critical. If you live in California and are concerned about the rising costs to feed your family, or if you are a California farmer or rancher please contact your state representatives, congressmen, and governor. If you are a producer from out of state, you can still have an impact by sharing our articles and information.