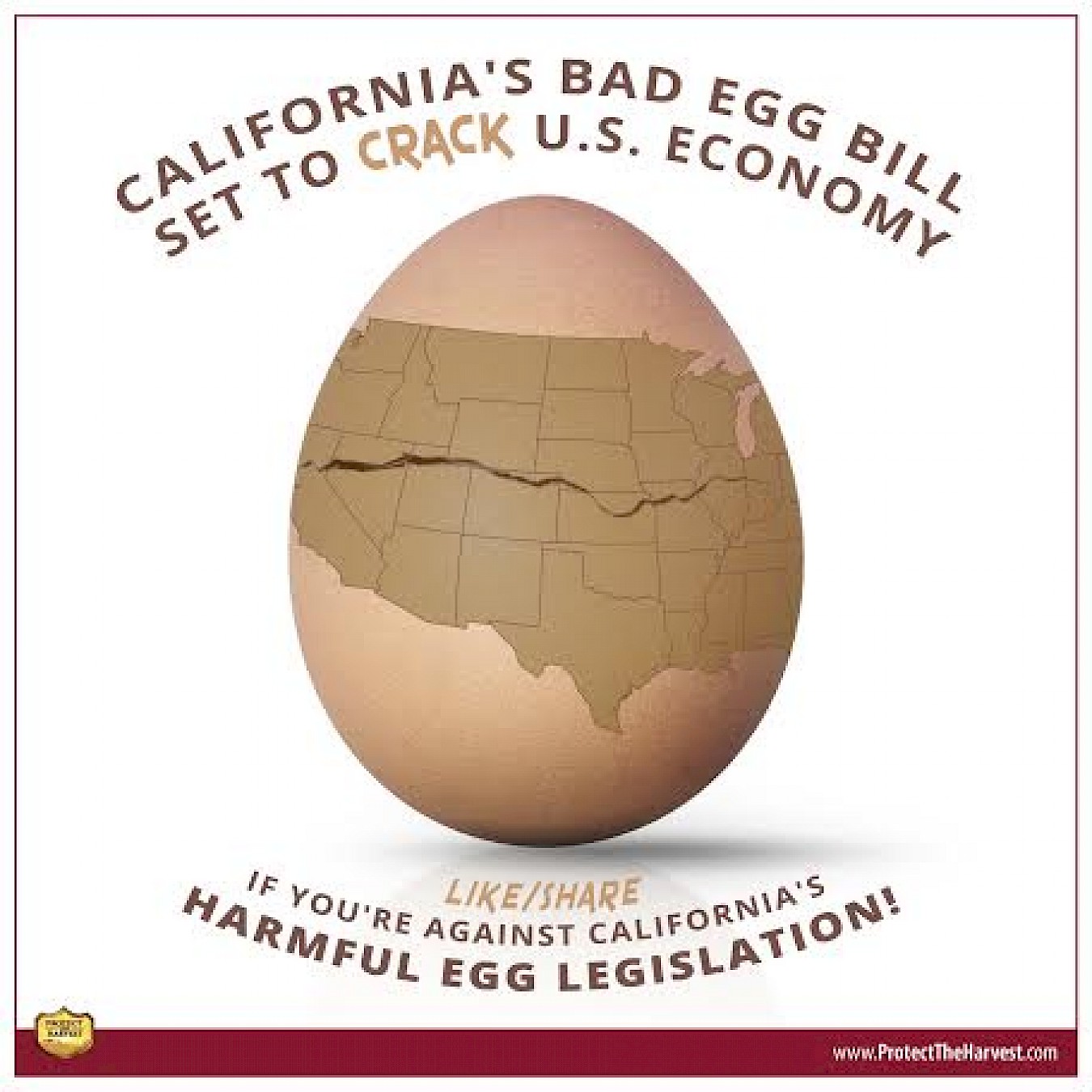 Two California laws (Proposition 2 and AB 1437) are going into effect that could have massive implications on U.S. egg producers, consumers, and even the environment; all while furthering a growing class divide in California.

Starting January 1st, all eggs sold in California must come from cage-free chickens or chickens housed in so-called “enriched cages.” Experts have predicted these restrictions will force prices on shell eggs to rise sharply, while causing shortages of eggs and egg products. Low inome families that consume one of the most affordable forms of protein in eggs, will face the burden of these prices at the supermarket.

Proposition 2 was first introduced in 2008, when California voters were asked whether egg-laying chickens should have more space in their cages. The move would put a large strain on farmers in the state, but voters were not given that information. The proposal said nothing about the eventual financial cost to them. The Humane Society of the United States (HSUS) , has no concern about families nor would they care to pass along any information to voters about the rise in costs. These bills survived the legislative and judicial processes. Wayne Pacelle and his fellow HSUS executives couldn’t be happier about the results.

The HSUS spent $4 million on the Prop 2 campaign. It is important to note that HSUS funds come from donors who believed they were helping shelter pets. The assault on egg farmers didn’t stop there. In 2010, California passed AB 1437, extending the reach of Proposition 2 to other states by requiring that any shell egg imported into California must follow these standards as well. Predictably, HSUS was the major financial and political support behind that bill as well. AB 1437 aims to regulate U.S. Commerce by dictating food production standards of an item sold and imported into the state. In theory, this is unconstitutional, as such regulations can only be handled by the federal government.

In actuality, California bypassed such restrictions on its governance and has, so far, been able to get away with it. Six states’ attorneys general (Missouri, Oklahoma, Alabama, Nebraska, Iowa, Kentucky) filed a lawsuit against California, challenging AB 1437’s constitutionality by arguing that it violated Commerce and Supremacy clauses. Unfortunately, a federal judge in Sacramento tossed the suit under the claim that the economic harm is not enough of a hindrance to provoke intervention.

California has over 39 million consumers and only 19 million egg laying chickens. They don’t rely solely on their own farmers for eggs. Imports from around the country are essential, and the disruption of the market would cause many egg producers to look to supply elsewhere. The state’s consumers will suffer when prices soar. Those national egg producers that choose to comply with the new cage requirements in order to continue trade with California will have to go through costly transitions, which some are estimating at $385 million or more initially, in new housing and business alterations. Basically, they would need to adjust their prices accordingly with a rise in overhead costs. This is where the nation’s egg consumers feel the burden. The producers suffer from the aforementioned costs, as well as a large reduction in chickens. Larger cages mean less space, which means less room to house chickens. Therefore, most producers that comply would need to limit their flocks. The Washington Post estimates that would mean the loss of 10 million egg laying chickens, 3.3% of the country’s total. A sharp decline in production will follow. California’s egg farmers will produce less as a result of tougher restrictions and costly implementation of enriched cage requirements. The National Association of Egg Farmers’ spokesman Ken Klippen:

“Just the sheer cost of doing that puts it beyond the reach of many farmers that I represent. They just can’t afford to make those kinds of adjustments.”

A Promar International Study predicts that up to 95% of California’s egg industry output could be sacrificed, resulting in hundreds of jobs lost in agribusiness. During a time when California’s population is at an all-time high and the number of job seekers continues to rise, the damage could be catastrophic. All these factors should’ve been considered when these bills were crafted, but they were not. The U.S. economy is in a delicate position right now with job numbers growing following a long period of unrest, but a major disruption such as this could throw things into a state of chaos.

There are examples of how similar bills have affected other countries. Cage requirements were passed several years ago in Europe and were fully implemented by 2012. It initially costed producers approximately 354 million Euros (roughly $500 million U.S. dollars). During that first year, Europe’s overall contribution to the global egg supply slipped by 2% total, including 4% in the U.K. Farmers there have already had to deal with shutdowns as their way of life is destroyed, and Europe has suffered from food shortages and astronomical prices. Making matters worse, Proposition 2 and AB 1437 will not improve the “health” egg-laying hens. The current cages had already been scientifically proven to be healthy for chickens. The space afforded from new enriched cages will expose them to a variety of dangers, including disease, bone breaks, parasites, cannibalism, and an increased risk of predatory attacks. It doesn’t help the egg producers, egg consumers, or even the chickens it is supposedly meant to protect.

Experts project that the new cage systems will require more land, feed, and energy, and will result in lower air quality. Additional transportation costs resulting from higher levels of egg imports into the state adds significantly to the carbon footprint. The impacts of California’s war on egg farmers will be felt across the nation. California is an important state for legislation. It’s an influencer among the governing bodies of the states. With a population of nearly 40 million (almost 12 million more than the next closest state), it controls a large portion of U.S. House seats and has 17 more electoral votes than any other state. When a bill is introduced in California’s state legislature, this is seen as a proving ground for the bill’s nationwide legitimacy. Successful bills will soon find their way to other states. The most harmful bills among those are the viruses that infect states’ rights.

California’s population are often early adopters radical measures, and they see “animal rights” as a vital piece of that puzzle. HSUS often backs legislation that will help its animal rights agenda. Because of its size and relevance to other states, most legislation in California will certainly find a way to affect the rest of the country. Proposition 2 and AB 1437 will overextend those who can’t afford to pay higher prices on a food item that is essential to their lives, the hardworking producers of eggs who are seeing their way of life constantly threatened by legal attacks, and the U.S. economy as a whole.

The national economic impact will be massive. California’s Department of Food & Agriculture reports that the overall impact on states shipping eggs into California is $150 million annually on top of the $648 million in the state alone. The University of California, Davis’ Agriculture Issues Center initially estimated an overall economic activity loss (factoring in economic ripple effect) of $370 million a year after implementation. The costs would be passed on to all U.S. consumers, who could see a 25% rise in prices cost them $2.66 billion annually.

The only people helped by these bills are the radical animals rights movement led by the Humane Society of the United States. Is it any wonder why HSUS contributes millions to state House races in California every election period? They seem to be getting their money’s worth.