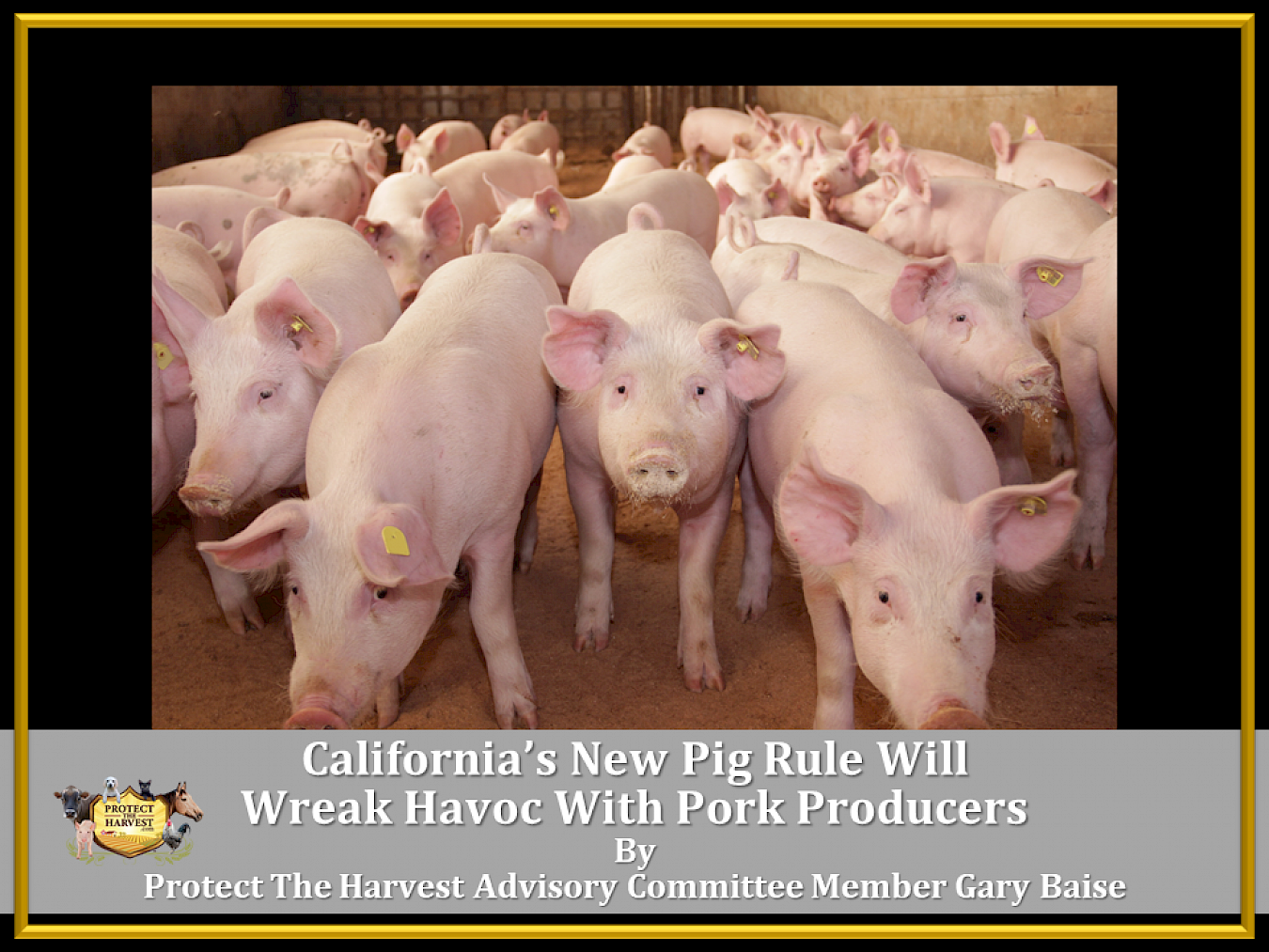 Government Leaders, Supreme Court Remain Silent as One State Imposes Arbitrary Rules on all Others.

California’s Proposition 12 took effect on Jan. 1, 2022. As you know from reading this blog these past four years, the law says anyone who wants to sell pork to California’s consumers must abide by that state’s arbitrary, non-scientific livestock housing requirements, passed overwhelmingly by California voters some four years ago. As of Sunday all the pork sold in California must come from sows that have at least 24 square feet of usable floor space. The new law states, “Enclosures must be sufficiently large enough to allow sows to turn around without touching the sides of the enclosure.” California will send inspectors out to your farm to ensure your livestock buildings meet Prop 12’s space requirements.

The Supreme Court so far has not stepped in, despite clear signals that this is a violation of the U.S. Constitution’s Commerce Clause. Neither has Congress. And what about USDA? A letter was written to USDA Secretary Tom Vilsack on May 27, 2021, begging him to get involved in the Proposition 12 controversy. He has remained silent.

The letter included a report produced by North Carolina State economist Dr. Barry K. Goodwin, “California’s Proposition 12 and Its Impact On the Pork Industry.” The study finds that construction costs for a new 5,200-sow operation that meets the California requirements would be $15.6 million, while retrofitting an existing barn would cost an average of $10 per pig, or $770 million for the 77 million sows on U.S. pig farms.

Californians account for 13% of the nation’s pork consumption yet import 99.87% of pork consumed. California only produces approximately 99,000 hogs.

To date, all legal challenges to California’s Proposition 12 have been met with a stone wall of defeat from the courts. This coming Friday, the U.S. Supreme Court will consider whether or not to grant the writ of certiorari. All this means is that the US Supreme Court will take the case brought by the National Pork Producers Council and the American Farm Bureau Federation, or decline to take it.

California has filed its brief. Because California’s Proposition 2 was upheld regarding the size of cages for egg-laying hens, there probably is not much hope that the US Supreme Court will take the Proposition 12 case.

Of course, there will be market disruption as existing facilities are either modified or completely replaced over the next 12 months. As Dr. Goodwin indicates, “We are months away from the intended implementation of Proposition 12 and many details regarding implementation remain uncertain.”

There’s nothing more daunting to a business leader than regulatory uncertainty. Pork producers of this country, and the industry as a whole, have been hesitant to change space requirements for hogs. While Dr. Goodwin believes cost upgrades could cost $10 per pig, “…Small operations will pay considerably more per animal. A farm of 1,000 animals will have costs that are about $15 higher per animal.”

So, while politicians lament the loss of small independent farms, they do nothing when an onerous law like this is allowed to stand and put more production under the control of fewer, larger operations.

As the industry braces for this change it’s easy to wonder: where is USDA and Tom Vilsack’s leadership on this issue? Mr. Secretary, America’s pork farmers need you.