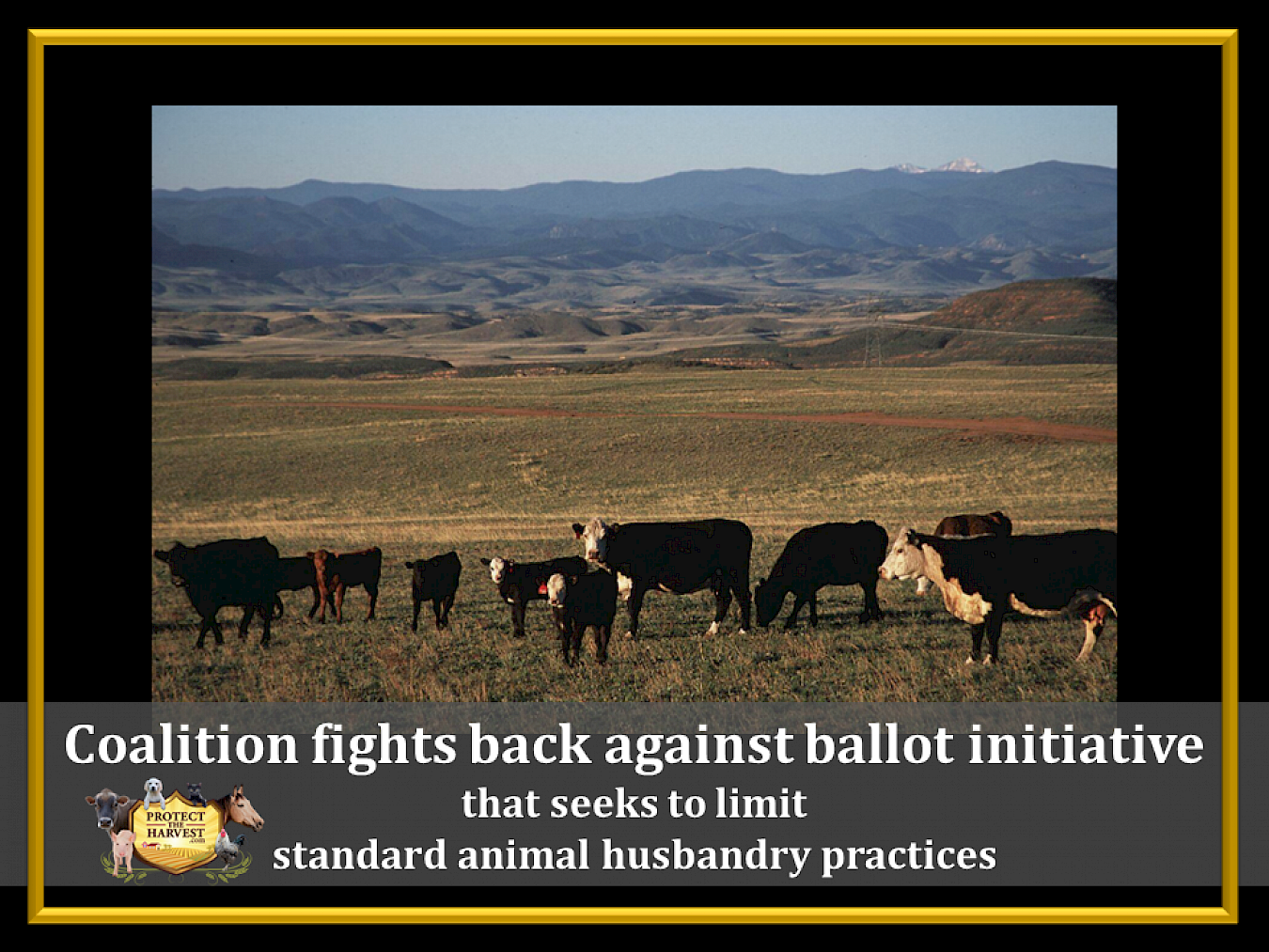 COLORADO COUNTY COMMISSIONERS ARE FIGHTING BACK AGAINST THE ANIMAL EXTREMIST AGENDA

Colorado Governor Jared Polis created a firestorm of pushback when he proclaimed Saturday, March 20th, to be “MeatOut Day” in a state whose livestock sector accounts for more than $5 billion in economic activity, more than $1 billion in exports and 150,000 jobs statewide. Beef cattle and dairy products are the state’s two largest ag sectors and create more than $3.6 billion in receipts.
Colorado County Commissions Issue Pro Producer and Pro Agriculture Resolutions
Over two dozen counties issued proclamations or resolutions from county commissions in support of agriculture, beef, dairy and other animal products. It should be mentioned that Colorado lamb is considered to be one of the finest products in the world.
The counties who issued proclamations are from all over the state. Most of the state’s acreage is rural, and the land for much of that acreage is suitable only for raising beef cattle, dairy cows, and sheep (both meat and wool). The counties who issued the resolutions supporting agriculture and livestock were:

The backlash didn’t stop with the resolutions either. Coloradans from all over the state stepped up and created events where meat was on the menu. There were over 75 events throughout the state celebrating “MeatIn Day” and over 25,000 people were offered complimentary barbecue meals, including more than 1,200 “food insecure” Denver residents. The events supported feeding those who were food insecure in local communities and raised over $300,000 to support need-based causes.

Farmers, Ranchers and Rural Residents Have Had Enough

Meat-Out days have been around since 1985. In fact, then Governor John Hickenlooper made a similar resolution in 2011 with no push back to speak of. So why was this year’s event taken so poorly? The answer is because of Initiative 16 (formerly known as the PAUSE Act).
Dreamed up by two animal extremists living in the Denver/Boulder area, Initiative 16 is a ballot measure that will criminalize animal husbandry and veterinary care practices. According to Article V, Section 1(2) of the Colorado Constitution, in order to put the ballot measure on the ballot, the number of signatures required for a statewide initiative petition is “at least five percent of the total number of votes cast for all candidates for the office of secretary of state at the previous general election.”

Article V, Section 1(3) of the Colorado Constitution also requires the same number of signatures for a statewide referendum petition.
The total number of votes cast for all candidates for the office of secretary of state at the November 6, 2018 General Election was 2,492,635. As a result, the signature requirement for statewide initiative petitions and statewide referendum petitions for 2019 through 2022 is 124,632 valid signatures. Initiatives that wish to make a change to the Colorado constitution must be signed by at least 2% of the total registered electors in each of the 35 Colorado state senate districts in addition to meeting the requirements outlined above (Article V, Section 1(4) of the Colorado constitution).

While the number of signatures needed according to the requirements seem out of easy reach, in perspective, they are very concerning. In the 2020 General Election, there were 3,932,033 registered voters in the entire state. In two counties alone, Denver and Boulder counties, there are a total of 862,349 registered voters, which are 22% of the total number of voters in the entire state. Even more alarming, the number of signatures needed for the two counties to equal 2% is 17,247. That number could be easily attained in one afternoon, with animal extremist petitioners canvassing urban coffee shops on a Saturday morning.

Animal Extremism (Rights) Has Nothing to Do With Animal Welfare

As advocates for the agriculture industry, Protect The Harvest supports animal welfare. According to the American Veterinary Medical Association (AVMA), the difference between animal welfare and animal rights (extremism) is this:
Animal welfare is a human responsibility that encompasses all aspects of animal well-being, including proper housing, management, nutrition, disease prevention and treatment, responsible care, humane handling, and, when necessary, humane euthanasia.

Animal rights is a philosophical view and personal value characterized by statements by various animal rights groups. Animal welfare and animal rights are not synonymous terms The AVMA wholeheartedly endorses and adopts promotion of animal welfare as official policy; however, the AVMA cannot endorse the philosophical views and personal values of animal rights advocates when they are incompatible with the responsible use of animals for human purposes, such as food, fiber, and research conducted for the benefit of both humans and animals. https://www.upc-online.org/avma_ar_policy.html

Initiative 16 is Not About Animal Welfare; It Will Criminalize Best Veterinary and Animal Husbandry Practices

The language of Initiative 16 is very concerning because if passed, it would criminalize the best veterinary and animal husbandry practices that are followed by veterinarians, ranchers and farmers.

The text of Initiative 16 can be found HERE

Those who have horses, cattle, dairy animals, and sheep know that the best standards of care are required to ensure healthy animals. Some of those practices would be criminalized by the passage of Initiative 16, including rectal palpation, artificial insemination, assisting with dystocia (difficulty in giving birth), even sheath cleaning would be a CRIMINAL act even if a veterinarian were to perform them.
The initiative also sets an arbitrary age expectancy and requires that livestock be allowed to live out one quarter of its natural lifespan. Of course, the numbers chosen are based on “statistical estimates.” The initiative also makes any of the practices listed in it a criminal act.

As used in this part 2, unless the context otherwise requires:

(2) "Animal" means any living NON-HUMAN creature, including, BUT NOT LIMITED TO, A DOG, A CAT, A HORSE, LIVESTOCK, a certified police working dog, a police working horse, and a service animal as those terms are defined, respectively, in subsections (2.3), (2.9), (2.4), and (4.7) of this section.

(5) "Sexual act with an animal" means an act between a person and an animal involving either direct physical contact between the genitals of one and the mouth, anus, or genitals of the other. SEXUAL ACT WITH AN ANIMAL ALSO INCLUDES ANY INTRUSION OR PENETRATION, HOWEVER SLIGHT, WITH AN OBJECT OR PART OF A PERSON’S BODY INTO AN ANIMAL’S ANUS OR GENITALS. A sexual act with an animal may be proven without allegation or proof of penetration. Nothing in this subsection (5) shall be construed to prohibit ANY PERSON FROM DISPENSING CARE TO AN ANIMAL IN THE INTEREST OF IMPROVING THAT ANIMAL’S HEALTH

It is clear from the wording of the initiative, that the proponents have absolutely no understanding of veterinary care (even expressing a dog’s anal glands would be taboo), nor do they understand animal husbandry practices. They are not aware that artificial insemination is a safe way to protect both sire and dam that live cover doesn’t allow for, they are not aware that rectal palpation is how to check for the positioning of a foal or calf, nor do they understand that it is used in colic cases in horses to determine if there’s a blockage due to fecal material, or worse a torsion. It is plain from the language that they are looking for that “hook” that all animal extremists look for, and this one is “sexual acts with animals.”

Coalition of Groups Fighting Back

Colorado’s ranchers are not taking this initiative lightly and have formed their own group called Coloradans for Animal Care.

There have also been to motions submitted requesting a rehearing on the subject.

The first motion was filed by 18 ranchers in Southwest Colorado and can be found HERE:

This motion can be found HERE

From the language in a motion put forward for a rehearing by leaders of a coalition aimed to fight against Initiative 16:

“As evidence of this political catch phrase, the proponents’ own website tells voters that this provision isn’t about changing standards for animal care but is, instead, designed to ensure that farmed animals are not “sexually assaulted.”

Further, one Colorado state representative has summarized the political volatility of this phraseology by noting that voters who are approached to support the measure will be asked “a simple question: ‘Who Wants to Have Sex with Animals?’” Smith, J., “The animal cruelty initiative is exacerbating controversy among Colorado ranchers,”

Link to article on Arabica Post HERE (last reviewed March 24, 2021) (comments of Rep. Richard Holtorf (R-Washington County)). Finally, this reference is intended to be – and will be – misleading to voters, as it triggers a canard that is unrelated to what is otherwise portrayed as the topic of this measure.

See Cox, M., “Don’t buy the hype – it’s not about animals,” Montrose Press, Mar. 11, 2021 click HERE (given this wording, “those with pruriently active minds will think of people having sexual relations with an animal”).

The coalitions against Initiative 16 in Colorado are the REAL experts. Animal owners, veterinarians and staff, ranchers, and farmers should be listened to, not two avowed animal extremists who obviously have another agenda in mind and are doing their best to carry out their ideology of removing all animal-human bonds.

We will be following and updating as this unfolds.