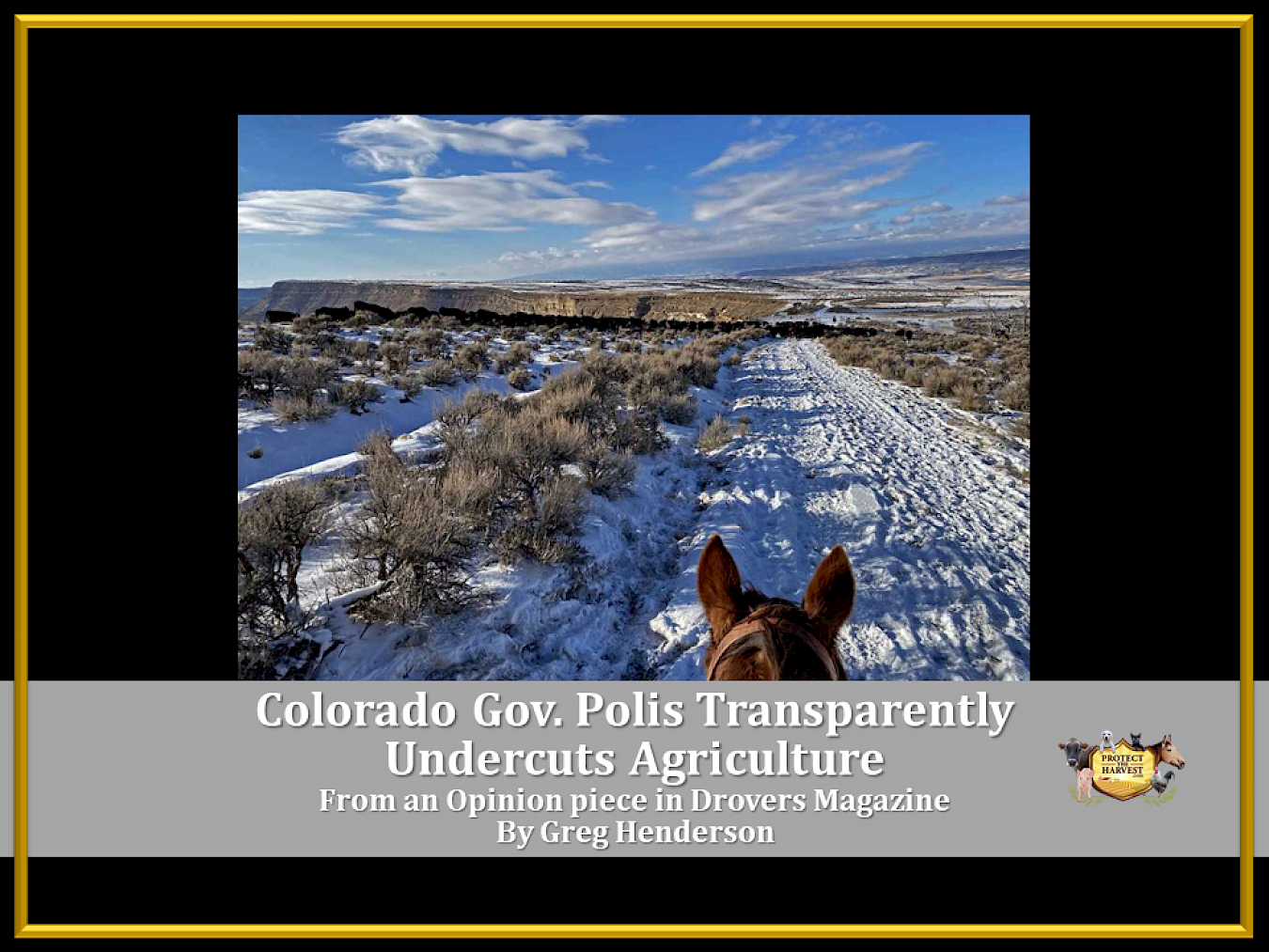 From an Opinion Piece in Drovers Magazine by Greg Henderson

Elections have consequences. Nowhere is that more obvious than Colorado where Gov. Jared Polis has been transparent in his efforts to further the cause of animal rights activists.

A governor can effect change through his appointments to various governmental agencies, and by influence on other appointments that are not under his/her direct supervision. In 2020, Polis appointed Ellen Kessler to the State Board of Veterinary Medicine, a move that was widely criticized by ranchers since Kessler is a self-proclaimed vegan/animal rights activist.

Rancher concerns about Kessler proved well-founded. Last month she had to step down after a controversial Facebook post where she called ranchers “lazy” and “nasty” and alleged ranchers would use “a cow to bait” wolves so they could collect compensation from the state. “What a racket. What a scam,” she declared.

Gov. Polis accepted her resignation and issued a statement calling Kessler’s words “hurtful.” He promised to appoint a new board member “that better shares his strong respect for Colorado’s hard-working ranchers and helps builds confidence in the practice of veterinary medicine across our state.”

Stubbing his toe on the Kessler appointment might lead you to think the governor would be inclined to help turn the rhetoric down a notch by making appointments that are less controversial. Such thinking appears to be wrong.
This week Colorado’s Bureau of Animal Protection (BAP) announced its new director, selected, according to The Fence Post, from a pool of candidates that included two animal rights attorneys and a wolf introduction and “humane food choice proponent.”

The BAP’s mission is to “administer and enforce the provisions of the Animal Protection Act to prevent the neglect, mistreatment, or abuse of animals in Colorado.” Which, well, helps underscore why ranchers might be leery when the top candidates are animal rights attorneys and a “humane food choice proponent,” a description that seems code for vegan.

Hiring the director of BAP falls under the scope of Colorado Commissioner of Agriculture Kate Greenberg. But open records requests by The Fence Post indicate Gov. Polis had a strong influence on the final selection.

Reporting for The Fence Post, Rachel Gabel wrote the ag commissioner’s selection panel put forward four applicants for an interview. “Those included a Colorado county animal control supervisor with BAP experience, a specialist in animal cruelty investigations and prosecutions with a metro District Attorney’s office, a state director for the Humane Society of the United States, and a senior executive of Mercy for Animals.”

That’s when Polis stepped in and put forward three picks of his own, none of whom were on the ag commissioner’s short list. One of those is employed by Los Angeles-based Animal Equity, and as part of a panel on investigating livestock crimes at the Animal Law Conference, he presented “Pasture to Prosecution: Using the Power of Animal Cruelty Laws to Protect Farmed Animals.” Wait, there’s more.

The second on Polis’ list is an attorney who claims he previously filed a class action lawsuit against dairy producers.

The final person on Polis’ list was Dr. Rebecca (Becky) Niemiec (pronounced “Knee-Mick”) an assistant professor in the Human Dimensions of Natural Resources Department at Colorado State University and the director of the Conservation Action Lab, who was announced by Colorado Commissioner of Agriculture Kate Greenberg as the new director of BAP.

In an introductory press release, Niemiec said, “I look forward to exploring how the BAP Program can use education and outreach as our primary tool to take a proactive approach to prevent animal abuse, rather than a reactive approach once that abuse has occurred.”

But thanks to reporting by Gabel, we also learn Niemiec conducted a study that advocated for the introduction of wolves to Colorado, and is currently leading a half million-dollar National Science Foundation grant in partnership with the City of Boulder and Mercy for Animals focused on promoting plant-based food choices. Mercy for Animals seeks to “construct a compassionate food system by reducing suffering and ending the exploitation of animals for food.”

As one might expect, Colorado ranchers are skeptical on Niemiec’s selection. Terry Fankhauser, executive vice president of the Colorado Cattlemen’s Association, told Gabel at The Fence Post, of the three finalists suggested by Polis, Neimiec is probably the least objectionable. He says he is more concerned about this hire than even Polis’s appointment of Ellen Kessler to the State Board of Veterinary Medicine.

“The message being sent by the governor is agriculture being a mortal enemy of the Department of Agriculture and the state,” Fankhauser said. “That message is being heard loud and clear. We are under attack.”

The sad reality for ranchers in Colorado is that Polis’ attempts to undermine animal agriculture are likely to continue. His blunder in appointing Kessler and his transparent influence on Niemiec’s hiring do not appear to have damaged his political prospects. Recent polling by Cygnal suggests Polis remains popular in Colorado, and The Denver Post says, “The Boulder Democrat has consistently polled well during his first term and is widely favored to win (reelection) this year.”