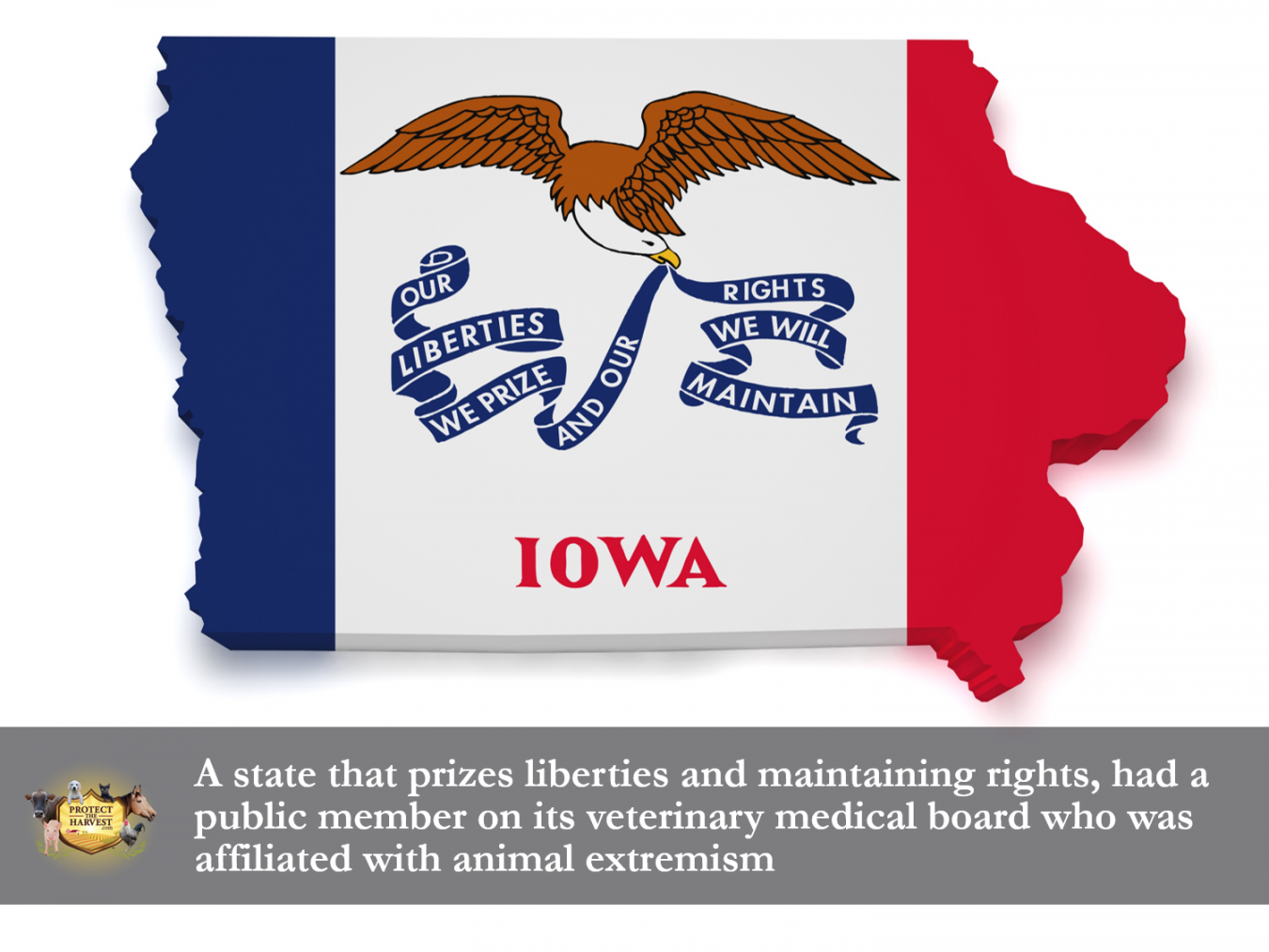 It Happened in Iowa Too

In August of 2020, animal owners were alarmed to learn that Colorado Governor Jared Polis had appointed a known animal extremist, Ellen Kessler to the state veterinary board. We wrote about this to alert the public and Colorado residents. In our article we outlined the function of the board, Kessler’s background, and her radical ideology which is easily found online. We also warned that this kind of appointment can happen in any state and advised animal owners to be vigilant and pay attention for roles like these that can be open to animal extremist influence. One of our supporters, lifelong advocate for animal ownership and welfare, Betsy Fickle, relayed to us what happened in her home state of Iowa.

It Happened in Iowa

With Colorado Governor Jared Polis appointing Ellen Kessler to the state veterinary board, the tentacles of the Humane Society of the United States (HSUS) agricultural destruction just got a bit stronger. This appointment shows how very patient they are in their weaseling in for control. This happened in Iowa ten years ago. Back in 2008, then Governor Chet Culver, appointed Tom Colvin to serve on the Iowa Veterinary Board as a public member.

Tom Colvin’s Connections to the HSUS

Tom Colvin is the Executive Director of the Animal Rescue League of Iowa (ARL), which has several satellite locations in Des Moines. He has held this position since 1993. Colvin also has direct ties to the Humane Society of the United States (HSUS). He is married to Carol Griglione, who worked as Iowa's HSUS state director from 2005 until approximately 2016.

Colvin worked at the Cedar Bend Humane Society starting in 1974. In 1981 Colvin became President of the Iowa Federation of Humane Societies, a group that works hand in glove with the HSUS, and he still holds this position today. Colvin serves on a number of other animal boards, including Iowa Farm Animal Care also affiliated with the HSUS, and the Association of Fundraising Professionals.
Animal Rescue League of Iowa and Its Sister Group Animal Rescue League Foundation
The Animal Rescue League of Iowa has worked closely with HSUS and the ASPCA since about 2011. Over the past several years ALR has joined up with the radical animal extremist group, Animal Legal Defense Fund (ALDF). The groups are all working together and lobbying at the Iowa State Capitol.

The Animal Rescue League of Iowa currently holds a five-year contract with the city of Des Moines. Due to being contracted by the city, the organization also has a close working relationship with the Des Moines Police Department and a significant amount of money is involved. A previous contract between the City of Des Moines and ARL was valued at $500,000. At this time the current contract rate is not easily available to the public, and neither is Tom Colvin’s salary. What can be found is interesting... In 2019, ARL had gross receipts of $6,992,626 and assets of $9,749,325.The sister organization to ARL of Iowa, the ARL Foundation, had gross receipts of $4,099,623 and assets of $11,597, 922.

Watch and Speak Out

It is vital to pay attention to what is happening in your community and your state, and to speak out because you can make a difference. As an example, in doing some research I had stumbled across information about Tom Colvin’s veterinary board appointment and that he was due for renomination in 2011. I notified the House Speaker, Linda Upmeyer, as the legislature had to approve the renomination. When I provided her with information about Colvin’s background and affiliations she was shocked. By simply providing information to the House Speaker, I was able to help ensure that a person with direct ties to animal extremist groups was no longer serving on the state veterinary medical board.

At Protect The Harvest we find it very interesting that a person affiliated with animal extremist ideology, an ideology that takes away the rights of animal owners would be appointed to the state veterinary board in Iowa. Iowa’s motto on their state flag reads, “Our liberties we prize, and our rights we will maintain.”