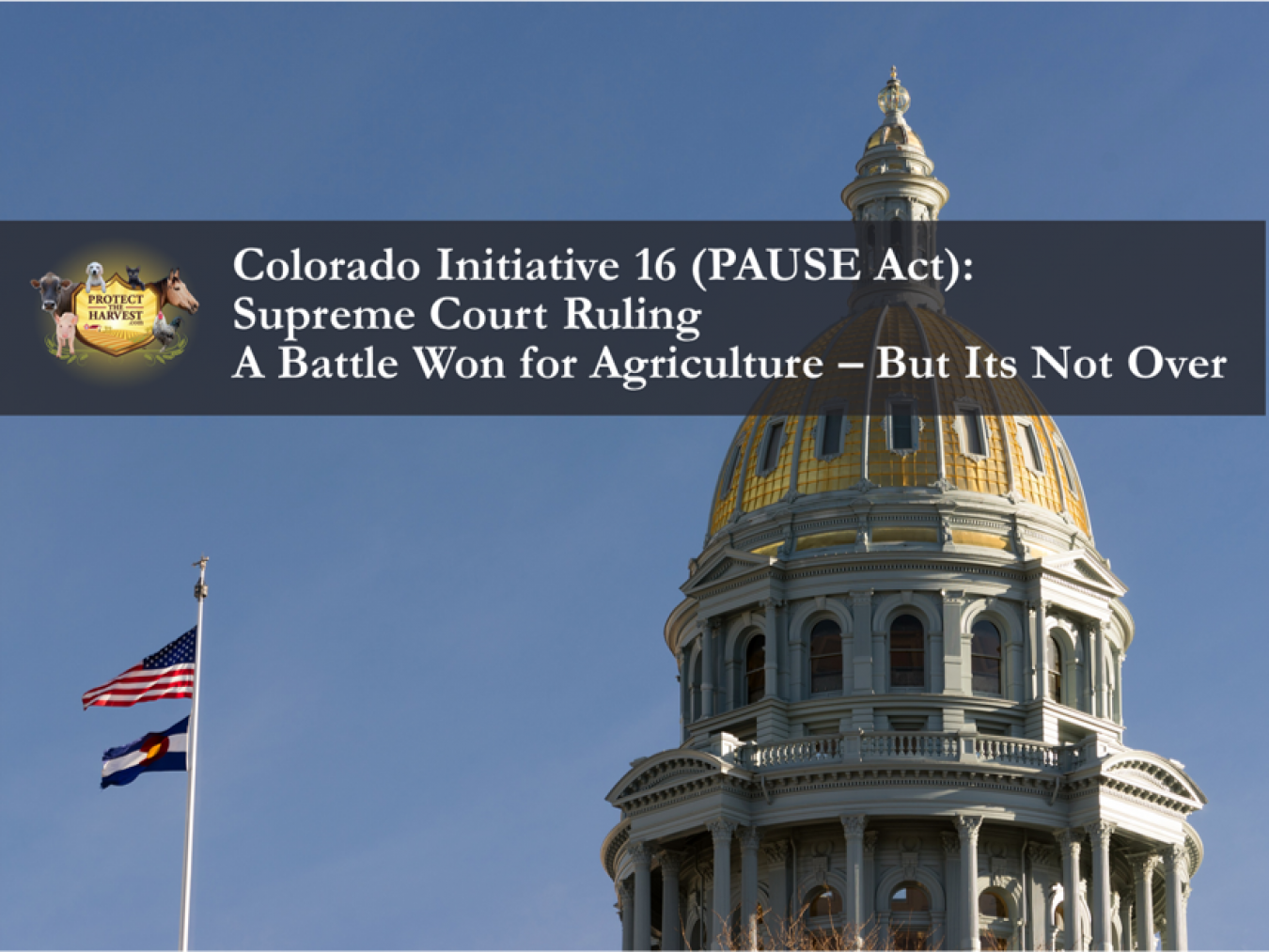 Protect The Harvest has been closely following Colorado’s Initiative 16 due to its alarming language that threatened not only veterinarians, ranchers, pet owners, but even the animal itself. We were pleased to hear on June 21, 2021 that the Colorado Supreme Court reversed the decision of the Colorado Title Board’s actions.

Coalition Formed to Fight Back

The Overreaching Changes to Animal Statutes

Its overreaching and alarming language called for a change in criminal cruelty to animal statutes even though there are already protections in place for animals. It would also have expanded animal statutes to include criminalizing certain animal husbandry practices including common and routine animal care and management treatments. Two of the most notable changes would drastically alter the existing wording from, “sexual act with an animal” so that it, “also included any intrusion or penetration, however slight with an object or part of a person’s body into an animal’s anus or genitals.”

Types of Animal Husbandry Practices that Would Be Banned

Based on the proposed language of Initiative 16, it would effectively have banned animal husbandry practices such as artificial insemination, pregnancy or colic checks, and rectal palpation. It would have made veterinarians reconsider methods for treating their patients due to those behaviors being criminalized. Shawn Martini, the Colorado Farm Bureau Vice President of Advocacy, voiced his concerns about the serious issues of directly criminalizing the tools producers and veterinarians use to efficiently and humanely produce food to fulfill consumers’ demand. “Anything you do, even if it is a generally accepted practice endorsed by the American Veterinary Medical Association, would still make you a criminal animal abuser,” he said in an article in The Fence Post.

Initiative 16 also proposed to amend Colorado’s criminal animal cruelty statutes by removing certain exemptions from livestock, thereby lumping livestock in with companion animals. It would make common veterinary and animal husbandry practices a crime. It would further muddy the waters because the language was so broad and covered multiple subjects, which is a violation of article V, section 1(5.5) of the Colorado Constitution, the “single-subject rule.”

The Colorado Supreme Court ruled unanimously that the State Title Board incorrectly gave a green light to Initiative 2020-21 #16. The Court held that Initiative #16 contained multiple subjects and, given its complexity, could mislead voters when they cast ballots. The Court vacated the title and remanded it to the Board with instructions to return the Initiative to its proponents for lack of jurisdiction because the single-subject rule was not satisfied.

The Court determined that Initiative 16 contained two subjects, expanding the definition of “sexual act with an animal” isn’t necessarily and properly connected to the measure’s central focus of incorporating livestock into animal cruelty statute. The justices issued a rare written opinion on Monday reversing the actions of the Title Board.
Justice William W. Hood lll wrote the Court’s opinion stating, “Although the central theme of the initiative is incorporating livestock into the animal cruelty statutes, redefining ‘sexual act with an animal’ strays into a second subject by addressing the bodily integrity of all animals, not just livestock. As such, there is the potential for the very kind of voter surprise against which the single-subject requirement seeks to guard- here, voters might not understand that what is nominally a livestock initiative also affects the care of all animals, or vice versa.”

In addition to the single-subject question the issue for the Court to decide was whether phrases like “animal cruelty” and “sexual act with an animal” in the title were catchphrases meant to improperly appeal to voters’ sympathy.
The Petitioners, Janie VanWinkle, Carlyle Currier, Chris Kraft, Terri Diane Lamers, William Hammerich and Joyce Kelly, filed a motion for rehearing arguing that the initiative’s titles were misleading and contained impermissible catch phrases.

“These phrases suggest that the primary purpose of this measure is to counter sexual acts between humans and animals, “wrote Mark G. Grueskin, attorney for the Petitioners, to the Court. “By using this misdirection of voter attention, Initiative 16 was intended to, and the titles do, trigger strong emotional and political responses that are far removed from the Initiative’s other purposes. Indeed, the political debate around Initiative 16 is already being framed around whether or not a person supports sex with animals.”

While the Title Board ruled that the initiative concerns a single subject, the State Supreme Court reversed the actions. The Court stated that the initiative’s central theme is incorporating livestock into the animal cruelty statutes, but expanding the definition of “sexual act with an animal would criminalize additional conduct regardless of whether that conduct is directed at livestock or other animals. Therefore, the initiative violates the Colorado Constitution’s single-subject requirement.

The Court reversed the Title Boards actions, returned it to the Title Board with instructions to strike the titles and return the initiative to its proponents. The Court also stated in its conclusion that because, “we determine that Initiative 16 contains multiple subjects, we don’t address whether the Board included impermissible catch phrases in the measures titles.”

While we applaud the Court’s decision in ruling that Initiative 16 was a violation of the Colorado Constitution’s provision that prohibits introduction of multiple subjects introduced into ballot initiative language, it isn’t over. The proponents of the Initiative can reintroduce another ballot initiative that follows the single-subject requirement, introduce further ballot initiative’s regarding “sexual acts with an animal” and any other type of ballot initiative they want. Our experience with animal extremism tells us that it is very clear that these will not stop until they have devastated and eliminated animal agriculture and animals in human care.

They are determined to end all human-animal bonds, whether livestock or companion animals, and they have the funding to push through legislation.

Protect The Harvest will continue to watch activities in Colorado and keep our readers informed.