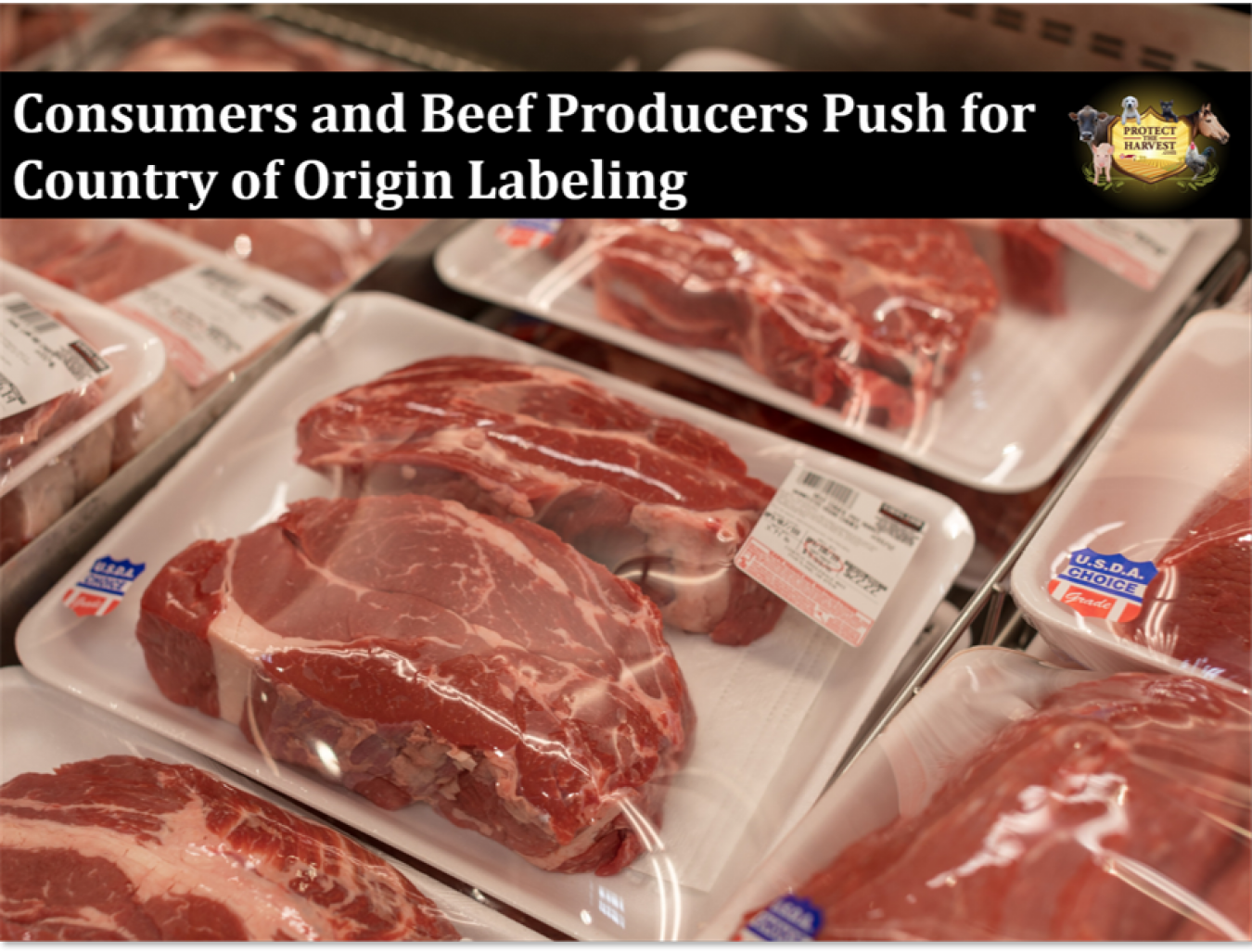 CONSUMERS AND BEEF PRODUCERS PUSH FOR COUNTRY OF ORIGIN LABELING

What is COOL – Country Of Origin Labeling?

Country of Origin Labeling, or COOL, was passed by Congress in 2002, in response to the growing volume of imported food products entering the United States. The law was passed to give American consumers informed dietary and purchasing choices. COOL allows consumers to make their own decisions about whether they choose to purchase food produced in the U.S. under U.S. Department of Agriculture (USDA) guidelines or to purchase foods produced in foreign countries without USDA guidelines.

Currently, Country of Origin Labels are found on all fresh and frozen fruits and vegetables, including peanuts, pecans, ginseng, and macadamia nuts. COOL labels are also found on chicken, lamb, goat meat, venison, wild and farm-raised fish and shellfish. Up until late 2015, COOL labels were also found on beef and pork products as well. However, that is no longer the case.

Consequences of COOL Repeal in 2015

COOL was repealed for beef and pork products in 2015. Since the repeal of COOL, multinational meatpackers have been importing high volumes of meat from foreign countries. The foreign meat is delivered to U.S. processing plants where it is repackaged. Once at a U.S. packing plant the foreign label is removed, the meat is placed in new packaging and then stamped with a new “Product of the U.S.A.” label. In addition to re-labeling meat processed in foreign countries, with the repeal of COOL meatpackers can now put a “Product of U.S.A.” label on all meat produced from cattle raised in a foreign country and then shipped to and processed in the United States. Therefore, even if there is a “Product of U.S.A.” label on a package of beef or pork, American consumers have had no way of knowing if their beef or pork is produced in the United States under USDA guidelines or in a foreign country.

According to a 2017 poll commissioned by the Consumer Federation of America, 89% of adult Americans favored country of origin labels on meat. In a time when consumers are asking their producers for increased transparency, it is important for the USDA United States Department of Agriculture (USDA) to aid farmers and ranchers in that endeavor.

Congress Folds to International Pressure, Not the Wishes of U.S. Citizens

Lawsuit Filed by Multinational Meatpackers Against COOL and the U.S. Government

The COOL law reserved the “Product of the U.S.A.” label only for meat that was born, raised, and processed in the United States. Soon after COOL was passed in the United States, multinational meatpackers sued the U.S. government claiming the COOL law was unconstitutional. They argued that all beef and pork slaughtered in the U.S. should be considered a U.S. product, even if the animals had spent their entire lives in a foreign country before being shipped to the U.S. for processing. However, they did not prevail in their lawsuit, as the United States Court ruled that COOL complied with our U.S. Constitution.

In addition to the dissatisfaction of the multinational meatpackers in regard to COOL, the governments of Canada and Mexico also did not want U.S. consumers to be able to make meat purchase choices based on their origin. Therefore, despite the ruling that COOL complied with the U.S. Constitution, Canada and Mexico filed a complaint against the U.S. COOL law with the United Nation’s World Trade Organization (WTO). The WTO chose the side of Canada and Mexico and stated that the U.S. COOL law passed under our U.S. Constitution was an “unlawful trade barrier.” The WTO gave the United States an ultimatum: either repeal the COOL law or face retaliatory tariffs on other goods the U.S. exports to Canada and Mexico. Instead of standing up for American consumers and U.S. Beef and Pork Producers, Congress immediately folded in response to the WTO’s ultimatum and repealed the COOL law only for beef and pork.

The United States imports about 3 billion pounds of beef per year. The majority of beef imports come from Canada, New Zealand, Brazil, Mexico, Uruguay, Nicaragua and Australia. The U.S. also imports about 2 million head of feeder and fed cattle from both Mexico and Canada that are processed in U.S. packing plants each year.

Most U.S. consumers would choose U.S. beef over beef from other countries if given the choice. This is where the Country of Origin labeling comes into play. The beef from imported cattle, under current regulations, can be labeled as “Products of U.S.A.” because they were processed here, just as foreign beef products that go through a U.S. processing plant can. Therefore, the removal of COOL and the improper labeling of beef and pork products puts American producers at a distinct disadvantage.

COOL has had an impact on producers of specialty beef products as well. The majority of the grass-fed beef is raised outside of the U.S. (Australia, New Zealand and Uruguay to be exact) but due to the repeal of COOL, foreign grass-fed beef is now sold here in the United States as a “Product of U.S.A.” because it is processed or repackaged here. The Associate Director of the American Grassfed Association (AGA), Carrie Balkhom, stated in an interview with Tri-State Livestock News:

“Our grass-fed producers who have been working for 15 years to create space on the shelf for their products are now seeing their markets be eroded by cheaper beef sourced from somewhere else. For a beef carcass to come from overseas and be processed or packaged here and labeled as a ‘Product of U.S.A’ is just not right.”

Since the repeal of Country of Origin Labeling for beef and pork, multinational meatpackers have been significantly increasing their financial margins by sourcing cheaper foreign beef and selling it to unsuspecting American consumers with the “Product of U.S.A.” label. Two of our nation’s largest beef packing companies are now foreign-owned. While their margins on imported products provide them direct financial benefits, the increased volumes of cheaper, undifferentiated foreign beef entering the U.S. market drives down domestic cattle prices. This gives the meatpackers yet another huge advantage. Worst of all, it further harms U.S. Farmers and Ranchers.

The reason foreign-owned meat packing companies want to keep Country of Origin Labeling off our beef and pork is because it allows them to reap the benefit of calling their foreign-raised products “Product of U.S.A.”. American cattlemen and U.S. beef have a very positive reputation. The U.S. product is held in high esteem and considered seen is the “gold standard” of beef. This reputation was gained by generations of well-informed cattlemen who have their animals and the consumers in mind.

In 2017, the Ranchers-Cattlemen Legal Action Fund, United Stockgrowers of America (R-CALF USA) and Cattle Producers of Washington (CPoW) filed a complaint in the U.S. District Court for the Eastern District of Washington against the USDA. Their complaint states that repealing COOL “unlawfully allows imported beef to be both sold to consumers without a country of origin label and sold to consumers with a “Product of USA” label even if the animal from which the beef was derived was born, raised and slaughtered in a foreign country.” Currently, if the beef products are repackaged in a USDA-inspected site, they can be labelled as a “Product of the USA”.

Join Together to Support our Local Beef Producers and American Consumers

If 89% of U.S. consumers want to know where their meat is raised and processed, why is it ok for beef and pork that is not raised or originally processed in the United States to bear a label with incorrect information? President Trump and Congress can close the current loophole in COOL that serves only to benefit multinational meatpackers and harms American producers. We need to join together and support our domestic beef producers by urging President Trump to change the USDA’s regulations so only beef products born, raised, and processed in the United States can bear the “Product of U.S.A.” label.

By urging both Congress and President Trump to reinstate Country of Origin Labeling for beef and pork, we will satisfy consumer wishes and support our domestic beef producers.