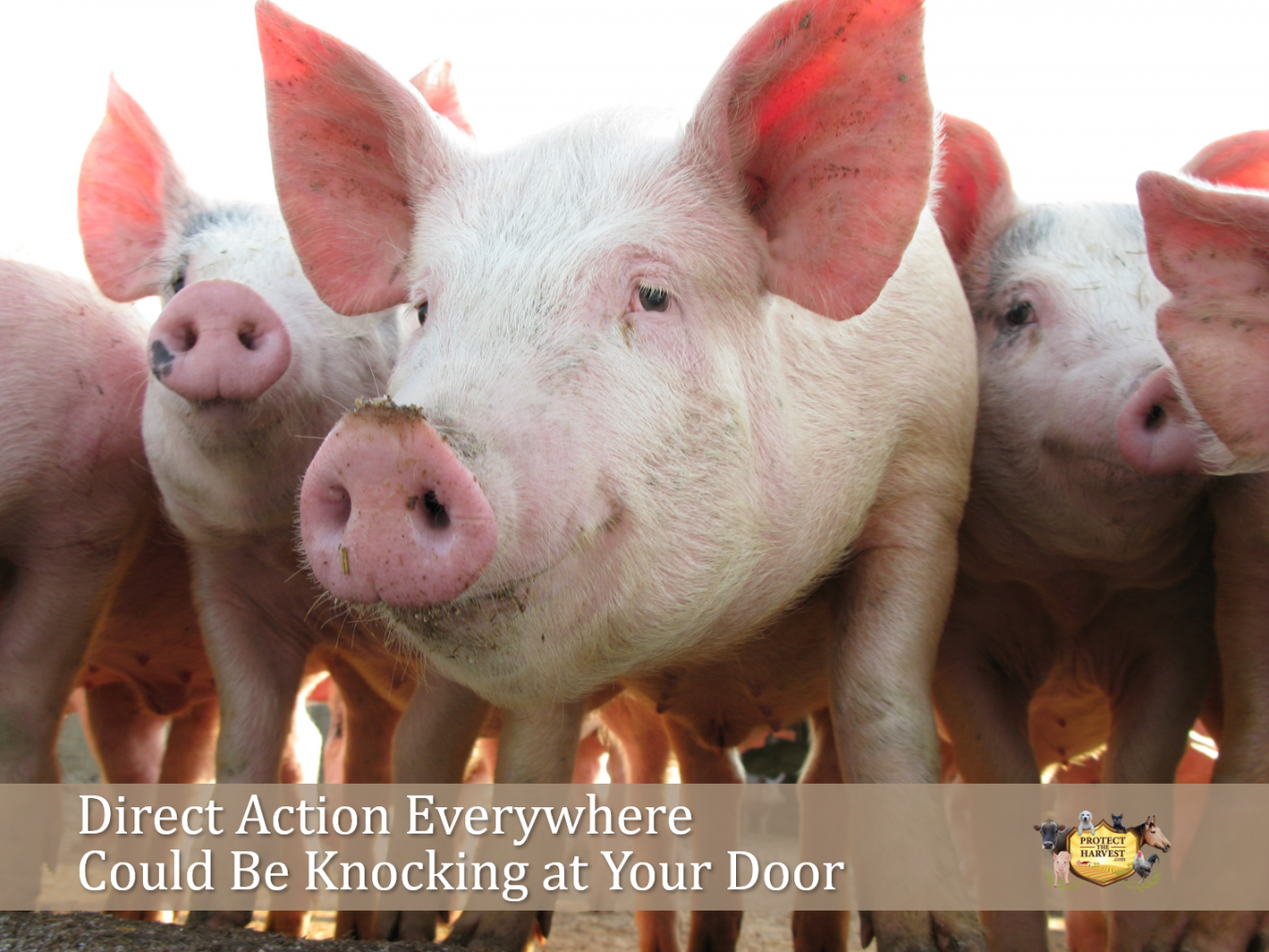 DXE COULD BE KNOCKING AT YOUR DOOR

DxE Has Plans to Raid Farms in the Midwest
The organization Direct Action Everywhere (DxE) has been very forthcoming in their intent to raid U.S. farms and ranches in an effort to “expose” them. Showing up unannounced and illegally trespassing, has been a mainstay of theirs since the group’s founding. In several cases it’s led to jail time on their part and criminal charges have been brought, especially to DxE’s former leader and co-founder, Wayne Hsiung.
Michelle Pardo, a partner at Duane Morris LLP, shared a blog post about Wayne Hsuing in August of 2019. Duane Morris LLP is a firm especially well versed in animal law. She stated: “Hsiung may soon be speaking to his followers from prison. As the result of multiple raids on farms in North Carolina, Utah, and California, Hsiung, along with other activists, was arrested and charged with multiple felonies and misdemeanors. Hsiung has stated that he faces from 85 to 100 years in prison for these criminal activities.” It is especially concerning that this doesn’t seem to deter them from going at it again and again. You can read our report on the organization HERE.

We know that DxE is currently in Iowa with the intent to trespass and film hog farms across the state. Activists associated with the group have already done so and been charged with felonious trespassing. This group has, and continues to, post videos on social platforms proving their involvement and intent. We warn all hog producers in the area to remain alert and know that activists could be and will be knocking at your door.

The Importance of Knowing Your Rights and Being Vigilant
As property owners you have rights. The Farmer’s Daughter USA blogger, Amanda Zaluckyj, shared in an article with AgDaily that there are four important things to remember if an activist (individual or group) show up unannounced.

1. Call the local law enforcement - Not only will this help remove them from your property, but it will also create a record that can be used in the future if needed. It is important to maintain a good relationship with your local law enforcement to ensure that the process is smooth if and when you need to ask them for assistance. Additionally, it is a good idea to have all records, specifically veterinary records, handy to help prove care and your relationship with your facility’s local vet.

2. Photograph - These can be used as evidence if and when you press charges. If possible, install a video surveillance system. Store recordings for a minimum of 90-days. Additionally, a video auditing system like Arrowsight could be helpful as well.

3. Social Media posting considerations - While it can sometimes help catch the perpetrators. Amanda warns: “Increasingly we see social-media posts coming into evidence during litigation. And unless you’re legally savvy, you could say something that might hurt your case later. If you think you might wind up in court, it’s probably best to consult an attorney before posting anything.”

4. Confrontation considerations – Some situations may call for intervention however, the safest option is usually to not interfere. The perpetrator(s) could have a weapon or psychological issues that make them more likely to be aggressive.

DxE Has Ties to Project Counterglow
Project Counterglow was created by Kacia Doolittle, an animal rights activist romantically involved with DxE spokesman Matt Johnson. Beyond their relationship, she also aligns with their mission and values. DxE has not claimed authorship of the website and initiative likely for liability reasons, however the intent of the website is to expose facilities associated with animal enterprises which in turn allows for activists to take action against them. Based on DxE’s past we know that those actions are inevitable.

Alerts Like This Are Important
We, at Protect The Harvest, will always bring your attention to efforts that harm agricultural producers. Threats like Project Counterglow and Direct Action Everywhere are real and should not be taken lightly. We urge you to learn more about DxE and stay vigilant.