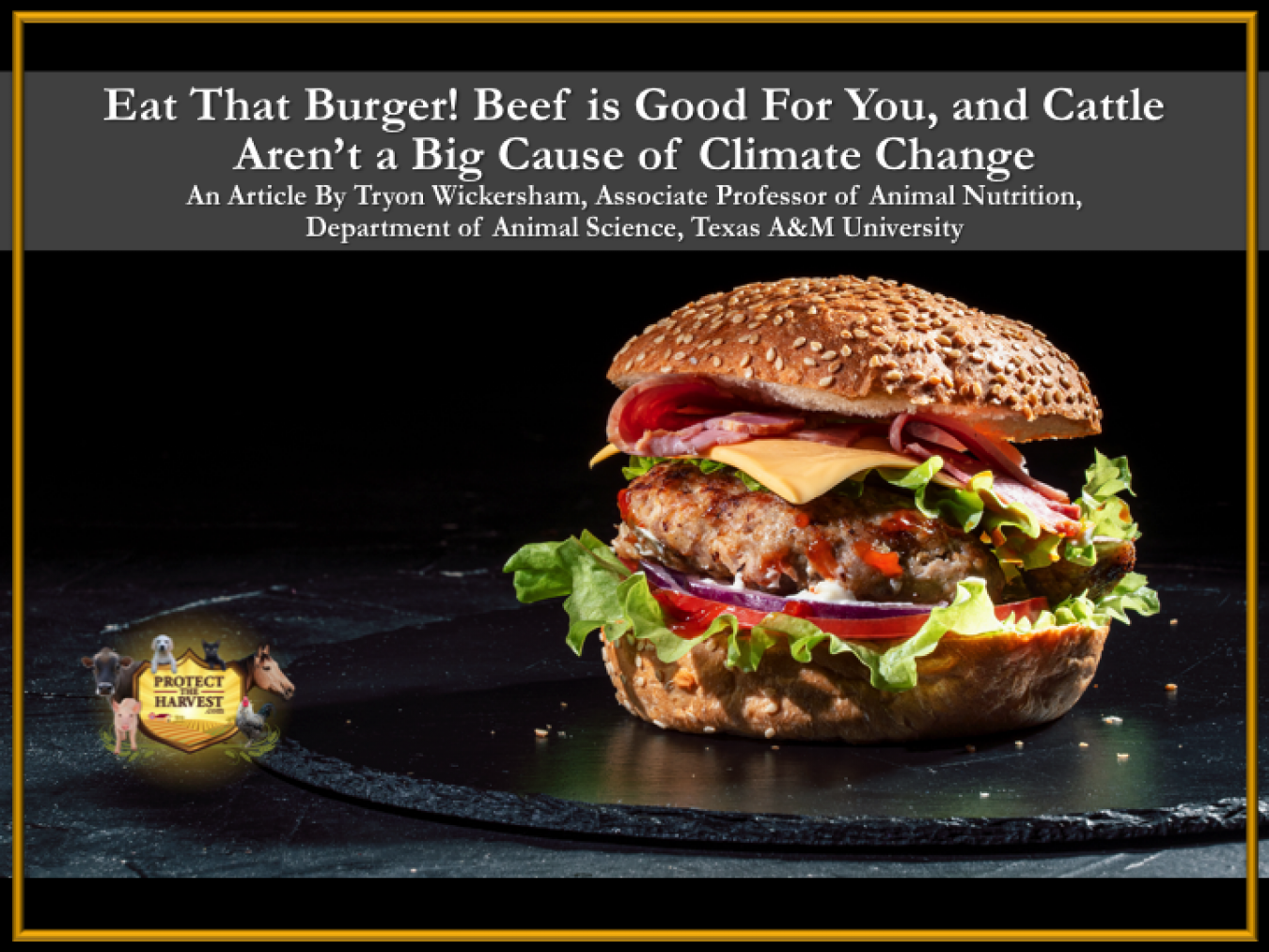 Beef is Good for you, and Cattle aren’t a Big Cause of Climate Change

A growing chorus of Hollywood celebrities, professional athletes and environmental activists are blaming cattle for ruining the natural landscape and exacerbating climate change — and they’re urging people to stop eating hamburgers and steaks.

These activists, while well-intentioned, are misinformed. As someone who’s studied cattle my entire scientific career, I know that cattle are an essential and sustainable part of a healthy diet and a healthy ecosystem. In fact, phasing beef out of our diets could harm people’s health and worsen global inequality, without substantially improving the climate.

Cattle aren’t major greenhouse gas emitters. Yes, cows famously belch out methane, but these burps constitute only a tiny fraction — about 2% — of overall emissions in the U.S. Compare that figure to transportation or power plants, which account for 29% and 28% of U.S. emissions, respectively.

And of course, whatever foods are used to replace beef have their own footprint, so a substitution isn’t likely to make a meaningful change in overall emissions.

In exchange for that relatively low emissions toll, cattle provide invaluable benefits to their ecosystems and to humans.

Cattle are ruminants; other ruminants include sheep, goats, deer, bison and antelope. Their four-chambered stomachs use symbiotic microbes to process and digest nutrients, which allow them to subsist on diets of incredibly fibrous, tough plant material that humans, pigs, and chickens can’t effectively digest; think grasses, leaves, and byproducts from food and fuel production.

Texas alone is home to more than 13 million of these great ruminants, 14% of the total U.S. cattle population. In Texas, cattle are our number one agricultural commodity, boasting a market value of $12.3 billion in 2017.

These cattle have essentially claimed the role of bison in grazing ecosystems. Beef cattle spend most of their lives grazing pastures, grasslands, and shrub land that humans can’t use for other agricultural purposes. Even grain-finished cattle spend just three months in a feedlot, on average. The rest of the time, they’re home on the range.

Cattle and other ruminants take the inedible protein found in crop residues, grasses, and byproducts and turn it into edible protein. This process is called upcycling. Think of it like taking an unfinished wood pallet and turning it into a sanded and varnished dinner table.

As my colleagues and I showed in Translational Animal Science in 2018, cattle improve plant protein incredibly efficiently. In fact, grain-finished cattle provide nearly 20% more human edible protein than they consume.

We shouldn’t underestimate the importance of upcycling. It enables humans, especially small children, to eat healthier, more sustainable diets. According to my research, if the corn grown to produce beef from one cow was fed directly to humans instead, it would provide enough essential amino acids for only three toddlers. The cow, by contrast, delivers enough essential amino acids to feed 17 toddlers.

Plus, if humans were to directly eat the corn, they’d need to consume far more calories to get enough essential nutrients, ironically putting them at risk of obesity and malnutrition simultaneously.

That’s actually a big problem, especially in the developing world. Farmers and ranchers now produce enough food for everyone on Earth to meet their calorie needs. But not every community has enough good food. Many people suffer from nutrient deficiencies, even if they have a surplus of calories.

Ruminants, including cattle, can be used to improve the quality of diets in many developing economies. Better diets can help people in such countries achieve basic outcomes. For example, eating meat improved cognitive function and educational outcomes in Kenyan school children.

Beef can provide the world with essential nutrients without competing with humans for food. My colleagues and I used a metric called “net protein contribution” to estimate how a food source contributes to human protein requirements. If that metric is below 1, it means a meat source is competing with humans for protein. A score above 1 means it is not. Cattle produced in the U.S. have an NPC ranging from 1.5 to 4.6.

Cattle aren’t the source of our environmental woes. They’re part of the solution to a vexing challenge: how to sustainably feed the world.

Tryon Wickersham is an associate professor of animal nutrition in the Department of Animal Science at Texas A&M University.