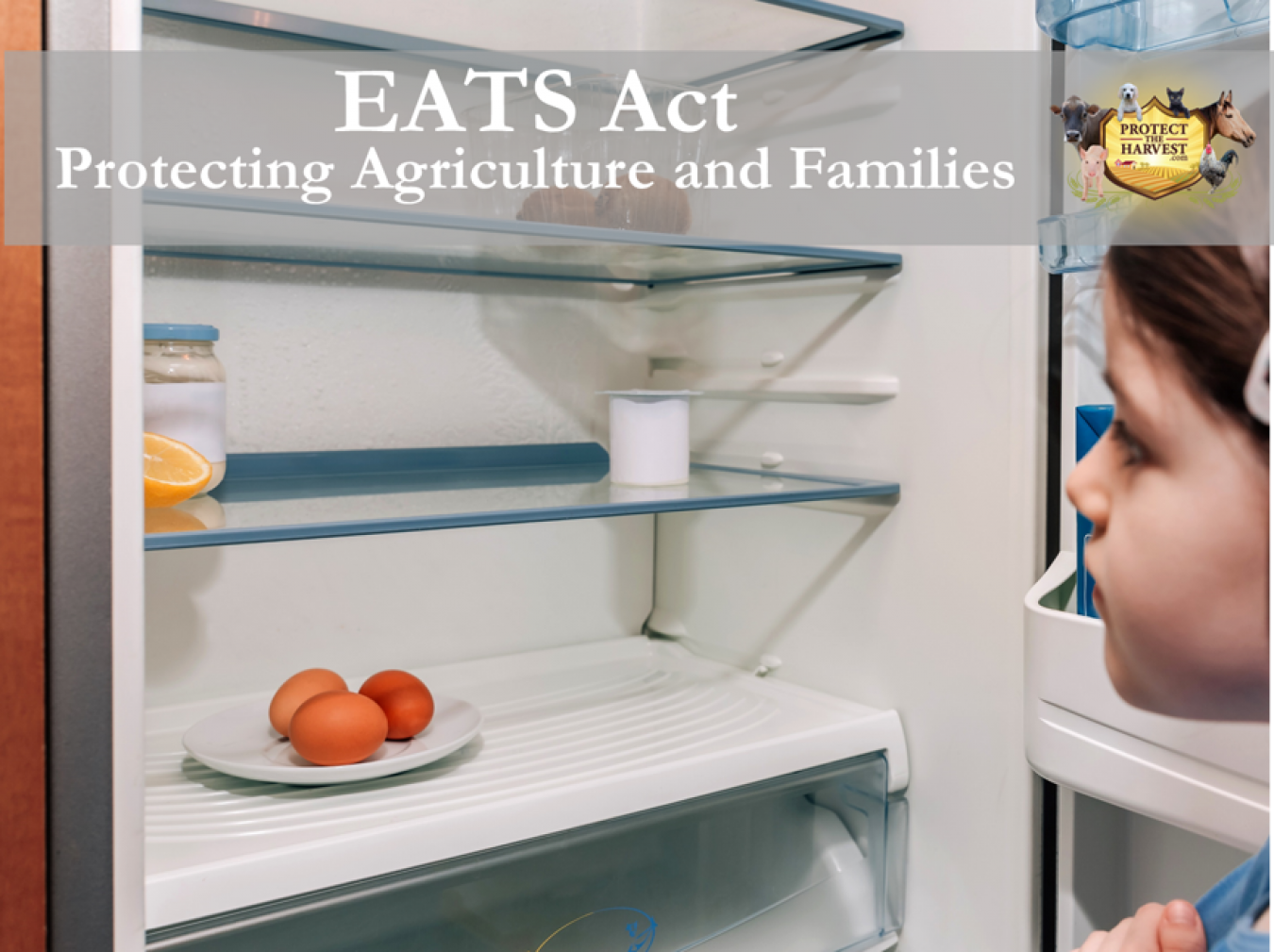 On August 5, the Exposing Agricultural Trade Suppression (EATS) Act S2619 was introduced to the Senate. Its purpose is to prohibit individual states and local governments from attempting to interfere with agricultural production methods outside their jurisdiction. The EATS Act was written to directly combat anti-animal agriculture legislation like California’s Proposition 12 and Massachusetts Question 3. These pieces of legislation, as they currently stand, force states wishing to participate in agricultural commerce in California and Massachusetts to abide by their radical extremist-influenced animal agriculture standards.

As of October 12th, it has been referred to the Senate Committee on Agriculture, Nutrition and Forestry.

The EATS Act would protect individual states and maintains the intent of the Commerce Clause of the Constitution. This clause essentially empowers the federal government to regulate interstate commerce and therefore makes legislation like California’s Proposition 12 illegal as it impedes trade from other states. When states like California try to leverage their laws to influence what other states do, they are stepping over into territory that belongs to federal jurisdiction.

Why the EATS Act is Important

This act is important to U.S. animal agriculture because it prevents any one state, no matter how large or powerful, from imposing its food and agriculture production standards on any other state. The EATS Act is serving only to reiterate the Commerce Clause and prevent these states from unconstitutional actions – it does not introduce anything brand new.

“The EATS Act, introduced in the House by Representative Hinson, would bring security to Iowa’s family pig farmers,” said Dennis Liljedahl, President of the Iowa Pork Producers Association in support of the legislation. “Family farmers like me can’t plan for our futures when more than 3,000 local and state governments across the country are allowed to regulate how our farm operates.”

The support for the EATS Act isn’t just about the best interest of the animal agriculture industry and family farms. It’s also important to protect at-risk Americans and low-income households plagued by food inequality and insecurity.

One of the biggest issues being overlooked in these state ballot initiatives is how they will affect low income families. The severe regulations on food animal production will make food significantly more expensive and that will have the most noticeable impact on those who already struggle to feed their families. When states like California enforce their limitations on farmers in outside states, that will inevitably increase the overall cost of production. It also increases the cost of those products on grocery store shelves. This poses a serious dilemma to those who are already food insecure that rely on affordable animal proteins coming from modern cost-effective farms.

Diane Sullivan, a well-known advocate for those facing hunger and poverty, fought against Massachusetts Question 3. This ballot initiative was voted for by the residents of the state and will ban the sale of meat and eggs from animals raised in large modern farms that do not comply with requirements set forth by animal extremist groups in Massachusetts. Sullivan has firsthand experience with food insecurity and shares her personal struggles with the public and lawmakers. She continues to work diligently to educate others on how these regulations will further impact low-income people.

Large modern farms provide valuable protein sources at affordable prices. Bear in mind that, despite our wealth, over 10% of U.S. households qualify as “food insecure” according to 2019 data from the Department of Agriculture. Thanks to farm modernization and productivity, the cost of American food products remain relatively low compared to the rest of the world.

Food elitism is the erroneous belief that certain food products and labels are superior than conventional ones. An example of this would be labeling high-end expensive products as organic, grass-fed, or plant-based. Such products are marketed and discussed as though they have more nutritional and social value.

This kind of thinking is dangerous as it leaves low-income and food insecure households out of the discussion. It is elitist ideology for states to enforce policies that make the production of animal proteins more expensive. The false pretense that these policies will make superior products or will enhance animal welfare is a denial of the fact that our current food system makes safe, quality food.

Animal Extremist Groups Are Afraid of the EATS Act

Animal extremist groups have been quick to push back against the EATS Act. These movements are not at all isolated as their network is extremely interconnected.

Large animal extremist groups such as the Humane Society of the United States (HSUS), American Society for the Prevention of Cruelty to Animals (ASPCA) and Mercy for Animals keep a very close eye on legislation. They write, promote, and fund their own legislation, regulations and ordinances to push their ideology and agenda. In addition to pushing their own laws and regulations, they oppose and set up high dollar campaigns against legislation that protects farmers, ranchers and animal owners. They are especially afraid of the EATS Act because it stops their extremist political influence and prevents their ideological overreach.

Animal Extremist Groups Are Interconnected and Work Together

The innerworkings of these groups are important to note when speaking of political action and public outreach. For example, PETA provides aid and support for two radical “direction action” type groups: the Earth Liberation Front and the Animal Liberation Front. Both groups have been labeled as “terrorist” groups by the FBI in a report before the Senate Judiciary Committee and again in a hearing before the Committee on Environment and Public Works.

Similarly, HSUS also has dozens of affiliates and “partners.” They have also had a number of high-ranking staff and volunteers who have connections with more radical groups like PETA, the Fund for Animals, Mercy for Animals, Compassion Over Killing and many more. The ASPCA has a similar history of connections with projects, legislation, and staffing. Suzanne McMillan, their farm animal campaign director, was at one time involved with Compassion Over Killing, an extremist group founded by the HSUS vice president. Their senior vice president of government relations was also deeply involved with HSUS.

The Humane Society Legislative Fund (HSLF) is the political arm of the HSUS that funds extremist political movements and lawmakers. The HSLF, like their sister organization, also propagates disinformation about animal agriculture. HSLF has become a powerful tool with their access to hundreds of millions of HSUS donor dollars and support throughout the activist network.

The HSLF website shows a dedicated EATS Act page calling the legislation “dangerous” and “A monumental threat is facing animals in our country.” Erroneously, they claim that the EATS Act brings with it “additional concerns” that include state law regulation, “pesticide application on fields, arsenic in food, protection against lead poisoning, chemicals in baby food containers, pollution standards for spraying sewage on crops, flammability standards for cigarettes and child labor,” but they fail to explain exactly why this would be the case.

There are numerous animal extremist websites which display opposition to the EATS Act. It is interesting to note that these pages opposing the EATS Act appear to have copied/pasted this exact same claims and disinformation.

HSLF it is not the only one that is wielding money into political influence. Many extremist groups use a fair chunk of their funds specifically for political efforts. Farm Sanctuary already has an automated letter on their website urging people to contact their representatives against EATS. The Animal Legal Defense Fund and Mercy for Animals are likewise calling for the same measures on their platforms.

Due to the efforts of animal extremist groups, opposition to the EATS Act is seeping into the minds of misinformed Americans with no background in animal agriculture, livestock animal care, management or welfare. The “animal protection laws” they refer to are not, however, laws that actually reflect true animal welfare. Instead, they are measures developed and pushed by animal extremist groups to disrupt modern agriculture and established welfare standards.

A citizen wrote the following to Statesman Journal:

This letter to the editor also attempts gaslighting claiming that the EATS Act is taking control away from farmers – which is far from the truth. In actuality, the EATS Act is working to protect farmers in all states from being forced to meet disruptive changes in animal care and management rooted in extremist falsehoods.

Another letter to The Northern Virginia Daily makes a similar attempting stating, “The EATS Act would wipe out years of progress on farm animal protection across the nation, and completely eliminate the possibility of further state and local improvements.”

“Farm animal protection” is used as a euphemism for extremist animal rights standards.

It’s important that lawmakers and citizens be informed on what is really at stake and take a look at who is behind both pro- and anti-animal agriculture legislation.

If you have concerns about the impact of legislation like Prop 12 in California and Mass Question 3 will have on interstate commerce and families across America, we urge you to contact your representatives in regards to the EATS Act.

Prev Article
Have Your Representatives Been Influenced by Animal Extremist Groups?
Next Article
Last Chance to Avoid Havoc for Pork Producers