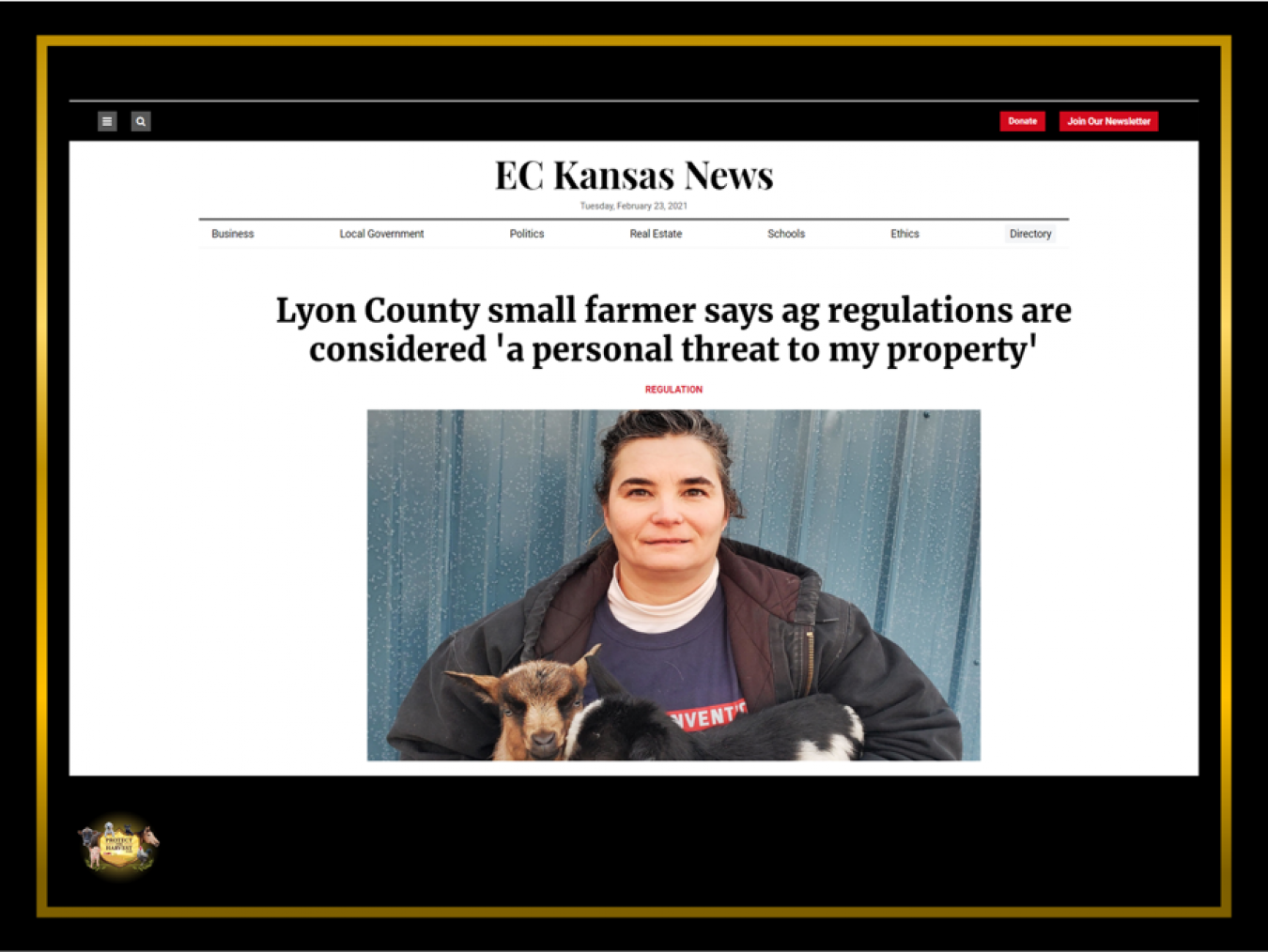 EC Kansas News Article about our friend, Angel Cushing and her determination to fight changes to zoning laws in Lyon County, Kansas, which will impact rural properties and small farming enterprise.

Angel Cushing might be a small farmer, but she has a big problem with what she perceives to be absurd and dangerous over-regulation of agriculture.

Cushing raises goats in northern Lyon County. Because her operation occupies less than 40 acres, she is required to show the agricultural use of her property. It’s a regulation she stumbled across in 2017 and has been researching and making her objections known.

“The Joint Emporia/Lyon County Comprehensive Plan was passed in late 2017. I had no idea,” Cushing told EC Kansas News. “I did learn later that Urban Collaborative, from Portland, Oregon, was hired to produce PLAN ELC and the accompanying zoning regulations needed to implement the Plan. Together, the city and county paid Urban Collaborative more than $450,000.”

Angel Cushing pets her animals at her farm. | Submitted
She said her concerns are that PLAN ELC shifts the economy from agriculture and agriculture industry to tourism and energy production, discourages land ownership of less than 40 acres or 16 homes per section, expands the Rail Trail to include trails on private property along the rivers and creeks, refers to private farmland as public by using terms such as “agriculture landscapes,” “open space,” “green space” and similar terms, and others.

"It combines governing between the city and the county. There are five city commissioners and only three county commissioners,” Cushing notes. “The city of Emporia now has the ability to govern unincorporated Lyon County — my farmland. It implements formed-based zoning on farmland."

“Form-based zoning is vague regulations that are strictly enforced,” she said. “The idea is to make the process of growth easier and more cost-effective for a developer, adding more streets to a planned subdivision, for example. It has its purpose. Vague regulations allow abuse. Agriculture exemption is an example."

But she said the first section of the regulations quotes state law that says all agriculture is exempt. Each section then goes on to regulate agriculture land.

“This allows the zoning administrator to pick and choose who they want to apply what regulations to,” Cushing said. “Given that the purpose of these zoning regulations is to eliminate agriculture and replace it with tourism and energy production, I consider these regulations a personal threat to my property and pursuit of happiness."

She is convinced most people in the state would oppose this — if made aware of it. Cushing believes 99% of Kansans do not know this is happening.

Cushing said there is a distinct lack of public input because of the COVID-19 pandemic, which has been linked to more than 294,000 cases and 4,614 deaths in Kansas.

”At least one-third of the phone calls I have taken have been individuals who feared attending hearings or meetings that would expose them to COVID,” she said. “In collecting petition signatures for the protest petition, the most common response I got was, ‘You know, you could be spreading COVID.”

There is no law or deadline on regulations, Cushing said.

“Pushing this in the middle of a pandemic is not representing the people,” she said. “There are a few petitions that were used in this process. Each time, the amount of signatures grew. In the last one, we collected 1,087 signatures (1,084 in 14 days) of residents in unincorporated Lyon County. There are 1,589 residents listed in the Lyon County 2019 plat directory. And still, we were ignored.”

She has written state legislators to express her concerns and provide detailed information.

“PLAN ELC was passed against the recommendations of the zoning board, without anyone knowing about it. It wasn’t until the eve of the vote to pass the regulations needed to enforce PLAN ELC in August of 2019 that anyone noticed,” she wrote. “And even then, we were all in shock. After all, who in their right mind would ban barb-wire fences in cattle country? Why does the federal government want Lyon County, Kansas, to give up agriculture? Perhaps the authors of our PLAN ELC and zoning regulations are an indicator.

“The Urban Collaborative is a Portland, Oregon-based company that prides itself in designing military installations for the Department of Defense. The lead designer has another company called Craft Crickets. Crickets, yes bugs, are promoted as the protein of the future. We must move away from beef, pork, chicken and other livestock in order to save the planet. You are reading this correctly. It isn’t a joke.”

Cushing said government entities are coerced into cooperating if they want to continue receiving federal dollars. It seems like the “Twilight Zone,” but is all too real in her view.

“Every federal program in existence has been converted into a tool to push extreme agendas,” she wrote. “This has been an exhausting fight for me. More than a year has gone by battling the regulations needed to convert private property into public lands. Please, help me win this battle.”

Cushing asked the legislators to call a Convention of States to address tighter regulations on agricultural property and other issues that she believes are linked to a runaway federal government intent on trampling individual rights.

“Federal grant money is the motive of this Joint Emporia/Lyon County Comprehensive Planning and Zoning,” Cushing said. “These anti-livestock production and anti-farming ideas have become a cultural society within our federal bureaucracies. Kansas needs to join other states in discussing these ideas being forced onto communities.”

She said citizens have the right to vote on how many commissioners they have.

”We should also have the right to vote on whether we want to join elected bodies with other communities,” Cushing said.

State officials should step in, in her view.

“It would be wonderful if the state attorney general’s office would enforce some of the laws they have, such as those on KOMA and KORA,” she said. “It would be wonderful if Attorney General (Derek) Schmidt would have an opinion of public hearings in the middle of a pandemic. I do know complaints have been filed regarding that issue, a few have been shared with me. Why doesn’t a county attorney have to write down his opinion when he throws out a petition? If it isn’t official, shouldn’t the three-quarters majority needed to pass the regulations stand?”

Cushing urges people to conduct research to understand the implications.

“It is easy to make this issue Angel versus the county commissioners if you haven’t read the plan and regulations,” she said. “When it comes to the regulations remember, they are written vaguely for a reason. You will likely need to hire a lawyer to understand their implications completely, as I had to do.“

Cushing said she wonders how far that goes. How about storing the beer fridge in the barn? Parking a boat in one of the stalls? Storing your kid’s furniture in the loft while they wait for the new house to get built? How about fishing poles and camping gear?

“And why is the word ‘exclusively’ included in the definition of agriculture structures?” she asked.

Another troubling example is 1.8.3 in the regulations, Cushing said.

“Landowners with less than 40 acres will have to pass an agricultural test (proving they are ag),” she said. “I can purchase 80 acres for a weekend campground for myself and automatically be ag exempt, though I produce nothing off of it and sell not one agricultural product. However, my 37-acre goat farm in which I produce market goats and sell, will require a test. Why am I treated differently than someone who owns 41 acres?"

For more information, review the Joint Emporia/Lyon County Comprehensive Plan, which is also on the city of Emporia’s website.