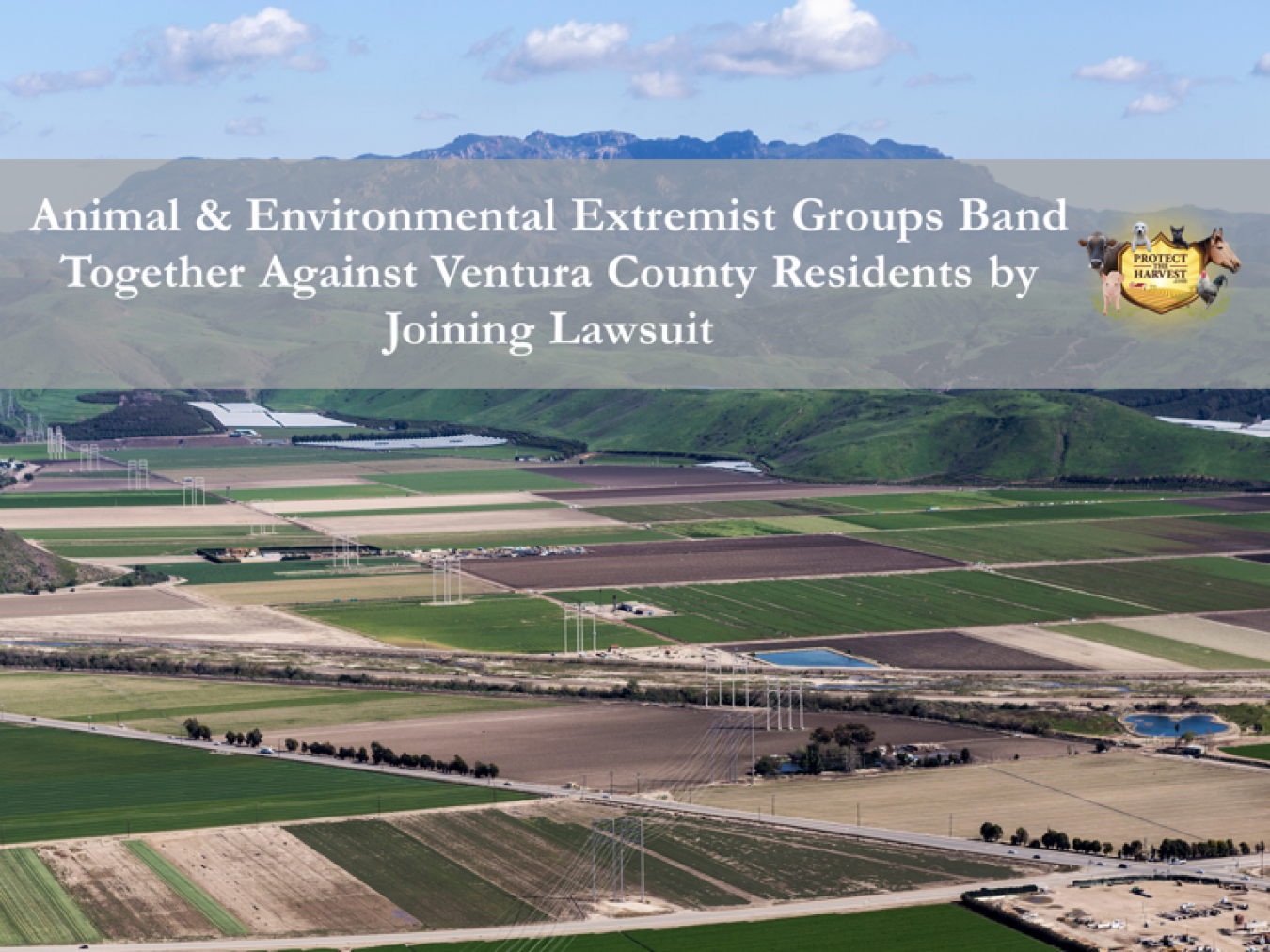 EXTREMIST GROUPS BAND TOGETHER AGAINST VENTURA COUNTY RESIDENTS IN LAWSUIT

In 2019, the citizens of Ventura County began fighting against the dangerous wildlife corridors ordinance (Habitat Connectivity and Wildlife Movement Corridors) passed by the county’s board of supervisors.

The Wildlife Corridor Encompasses One Third of Ventura County – Including Private Property
The Ventura County Wildlife Corridor covers a large swath of land, which is nearly a third of the county. As it is currently outlined, the corridor is made up of both public and private lands and it places extreme restrictions on land use in the areas inside the corridor. These restrictions take away the usage of the property from the rightful landowners, all without any compensation or additional provisions.

Protect The Harvest became involved to help inform the public in the area as well as other rural land owners in California about the wildlife corridor and the far-reaching implications. Our efforts included informative videos and educational articles. Unfortunately, despite more than eight hours of testimony from concerned Ventura County citizens, the Ventura County Commission voted in favor of its passage while knowing there was a large constituency of country residents against it.

One commissioner even put it bluntly, "We know there is going to be a lawsuit, but we are going to do it anyway." 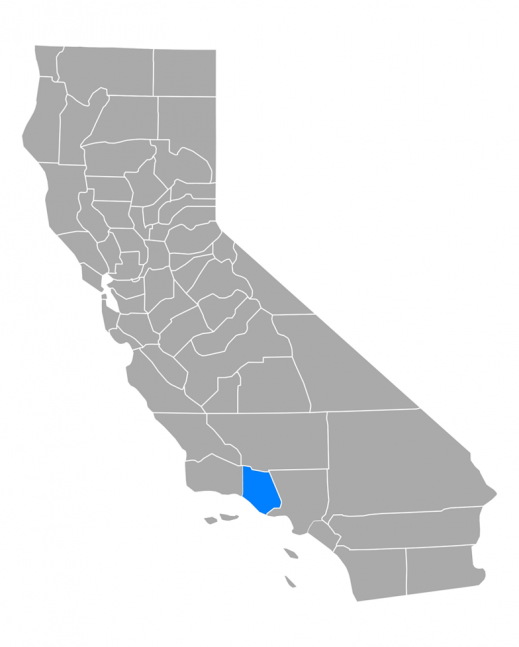 A Lawsuit Against Ventura County Commissioners was Filed

After the ordiance passed, that is exactly what happened. A lawsuit was filed by Ventura County CoLAB against Ventura County to actively combat the Wildlife Corridor Ordinance. CoLAB is a non-profit organization made up of agriculture and business professionals promoting governance that is both sensible and rational.

The next hearing on the issue is scheduled for November 9th 2021.

Environmental Extremist Groups Get Involved in the Lawsuit as Defendants

It is no surprise to us that animal and environmental extremist non-governmental organizations (NGOs) have also entered the fight as “defendants” along with Ventura County. These groups are not acting alone. They are capitalizing on their intricate, highly interwoven web of national and international animal and environmental extremist groups. These groups work together on issues to seem larger and more powerful than they actually are. In reality, only a very miniscule portion of the population agrees with their viewpoints. 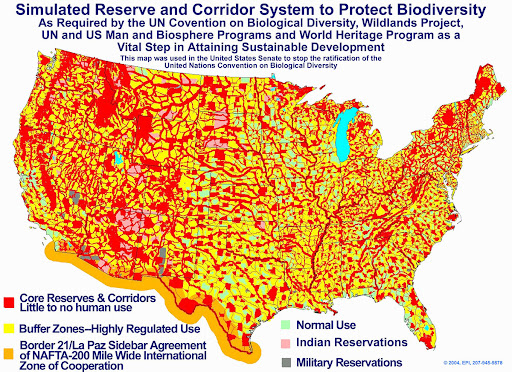 It should be noted that these pieces of legislation are by no means standing alone; they are eerily in line with the United Nations Plan for Sustainable Development.

It can be considered one of the many battles in the “rewilding” movements of various extremist groups with the underlying goals of seriously inhibiting ranchers and rural communities across the country.

Rewilding is defined as “the planned reintroduction of a plant or animal species, and especially a keystone species or apex predator (such as the gray wolf or lynx) into a habitat from which it has disappeared (as from hunting or habitat destruction) in an effort to increase biodiversity and restore the health of an ecosystem.”

Hidden behind the movement are the roots of animal and environmental extremist ideology. The belief that humans are not a part of the ecosystem and action to remove human involvement must be taken to ensure lands and wildlife are protected. In other words, despite healthy populations and millions of acres of protected land, private landowners must relinquish their control and use of their lands. Rural lands ought to provide “unrestricted movement among a wide range of animals.”

The proposed “National Wildlife Corridor System” on the federal level reflects this “rewilding” mentality exactly and offers no protections to private landowners. Unsurprisingly, it was highly backed by the usual cast of HSUS-friendly politicians who have been recognized and awarded.

Besides being a leg of extremist efforts, what’s happening in Ventura County will have severely negative impacts for livestock producers and private landowners.

For public and private lands that are zoned according to the Ventura County Supervisors, new restrictions and regulations will be implemented. Impacts will include:

o Rebuild their home and any structures damaged or destroyed (more than 50%) by fire, flood, landslide, or other natural disasters
o Repair or replace any security fencing on their property
o Use heavy equipment (including mowers!) to remove or manage vegetation to reduce fire risk on their property

o All new development on your property must be located within 100 feet of the first structure built on the property. That includes the house, barn, workshop, garage, guest house, ADU's.
o Whether you own 5 acres or 500 acres, you can only build on approximately 40,000 square feet of the entire property. That's less than 1 acre total. But property taxes have not been adjusted to reflect the fact that you cannot use most of your property as you wish or see fit.
o Already built all the structures you want on your property and think you are exempt? If you want to RENOVATE or add-on to your existing home or buildings on your property, the new restrictions will apply.

Of these restrictions, the CoLAB says, “The restrictions imposed by the Wildlife Corridor Ordinance are some of the many insidious violations of private property rights happening here and across the United States.

It should also be noted that there are no compensations offered to landowners for their lost rights or inconvenience. Likewise, it also ignores other established wildlife areas and movements throughout the county while relying on outdated maps, studies, and models to create the corridors and zoning.

This Trojan horse of sorts focuses on using promises of greater “sustainability” to greatly restrict and limit the private sector while giving world governments more control of the food system. Animal and environmental extremist NGOs take a keen interest in actions on both the local and federal levels. Their support system comes from very high levels in their expansive networks due to their efforts in accord with the United Nations Plan for Sustainable Development.

A quick look at UN supporters unveils some notable extremist groups including the Humane Society of the United States (HSUS), World Wildlife Fund (WWF), and People for the Ethical Treatment of Animals (PETA).

Four groups, all with ties to some of the aforementioned entities and many similar extremist NGOs, were granted permission by a judge to defend the ordinance in an “intervenor status.” Let’s go a little bit deeper into who is behind these groups along with their influences and motivations.

The Los Padres ForestWatch, in addition to partnering with fellow extremist groups on a larger platform, has a lot of its own interconnections. Their director of advocacy, Rebecca August, is a group co-chair and an executive committee member for the Los Padres Sierra Club chapter.

ForestWatch Secretary Terri Lane has a professional background with Patagonia, the popular apparel brand that works with multiple environmental extremist groups. Their site even has software to connect visitors with different groups and NGOs in their area.

The Sierra Club has a known history of extremist activities. Paul Watson, an animal extremist who co-founded Greenpeace and the Sea Shepherd Conservation Society, sat on the Club’s board and even fought to gain higher leadership positions.

The group also has a history of racking up lawsuits against the EPA at the taxpayers’ expense. They have some questionable financials that include non-disclosed off-shore entities. The Sierra Club’s taxpayer funding from 1995 to 2011 at $966,687 ranked second only two Earthjustice according to a Government Accountability Office report.

Earthjustice is one of ForestWatch’s other problematic partners. In the same report, Earthjustice earned $4,655,425 from taxpayers. It was originally founded under the Sierra Club as their Legal Defense Fund. This number may not even be fully reflective as the report was unable to obtain years’ worth of attorney fee payments.

Third on the Government Accountability Office’s report was another ForestWatch benefactor, the Natural Resources Defense Council (NRDC) who earns over $180 million in net assets annually. It is important to note that an officer from American Wild Horse Campaign is also the treasurer for the NRDC.

A group similar to NRDC is Food and Water Watch. This group has a long history of going after modern farming practices and other industries such as fracking. They have also promoted fear mongering type campaigns against GE crops without any scientific credentials. Additionally, they have been known to oppose private ownership of resources such as water. This is illustrated by the fact that Food and Water Watch board member Maude Barlow was appointed to advise the UN on water policy and issues without having any background on the subject. She has even called for the complete removal of water from private ownership.

The Defenders of Wildlife is another group with a broad extremist reach and ties to many of the previously mentioned organizations. Their former executive vice president, John Grandy, had also served as Senior Vice President of Wildlife & Habitat Protection for the HSUS.

The group has also previously teamed up with likeminded groups including the Sierra Club and NRDC to petition the EPA against genetically engineered crops.

One of their past regional directors, Mike Leahy, worked to campaign against wolf hunting and went on to be a conservation director at the Izaak Walton League.

The Center for Biological Diversity

The Center for Biological Diversity (CBD) is another NGO with a long history of fighting against land held in the private sector. One of the most notable is manipulating the Endangered Species Act to restrict land usage from activities like grazing and forestry by making unsubstantiated claims that one or more species would be threatened under the act. This group is also well known for abusing the Endangered Species Act and the Equal Access to Justice Act to fatten their coffers with taxpayer dollars .

Like its allied NGOs, the CBD also leverages millions in taxpayer dollars, many of which are wasted on frivolous “Sue and Settle” lawsuits alongside other extremist organizations such as Defenders of Wildlife.

Protect The Harvest is committed to protecting private property rights by informing and educating the public about the agenda and activities of these nefarious groups. The organization stands with vulnerable areas such as Ventura County against extremist groups and their activism. The Ventura County Wildlife Corridor is the test bed for the United Nations agenda. If Ventura CoLab does not prevail in its lawsuit against this illegal taking of property, Ventura County will be the first domino to fall setting a dangerous precedent. Across the United States there are already areas which are being subjected to National Heritage and UNESCO classification.

These attacks are not only regional, rather they reflect the widespread effort to restrain and limit private ownership and implement the United Nations Sustainable Development plans.

Read the latest on the CoLAB’s efforts HERE.

Read our coverage of the CBD HERE.

Learn more about Defenders of Wildlife and Izaak Walton HERE and HERE.

Prev Article
Animal Extremism - Not A Partisan Platform
Next Article
Man, You Have A Problem - Grizzly Bear Behavior in Wyoming is a Reflection