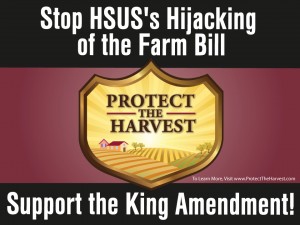 As members of Congress near the end of their August recess, American farmers and ranchers are still concerned whether or not they’ll get a farm bill this year. In an earlier blog series, we wrote about the importance of Iowa Congressman Steve King’s amendment to the farm bill, the Protect Interstate Commerce Act (PICA, Sec. 11312 of H.R. 2642.) The King amendment is straight and narrow. Put simply, it enforces the Constitutional provisions which prevent one state from imposing regulatory mandates on producers in other states. Any state can regulate farmers in its own state, but a state does not have the right to construct arbitrary interstate trade barriers and impose its will on farmers and obstruct the rights of other states.

“… the California egg roll is the sort of interstate trade restriction the Commerce Clause was designed to block. The legal and economic stake are large enough that the House GOP ought to pass Mr. King’s provision by itself if the broader farm bill fails.” - WSJ Article, 08/15/2013.

The “egg roll” referenced is the 2008 California ballot initiative that forces California’s egg producers to adopt costly new regulations that will increase the cost of eggs for consumers. The Humane Society of the United States (HSUS) spent roughly four million dollars funding the effort, and, effective January 1, 2015, producers must fully comply with the new hen housing standards. Out-of-state poultry producers will also be forced to adopt the same standards if they wish to continue selling their federally regulated product in the state of California.

“California’s 38 million citizens comprise the largest market in the U.S., which means the hen pecking more or less dictates livestock standards to the rest of the country. That’s precisely why activists went to the Golden State, which these days throws around its market weight to set national environmental standards on everything from cars to low-carbon fuels.” - WSJ Article

But, it’s the U.S. Constitution’s Commerce Clause that prevents any one state from enacting laws that place restrictions on interstate trade. And Congressman King is on the right track with his amendment. The King amendment is a security measure to protect against, and block, HSUS and other animal rights groups from creating a montage of similar laws all across the nation, making it next to impossible for producers to keep up with compliance. But that’s their intention right? To create laws that make producing eggs more costly and so expensive that American families can no longer afford them. A California-sponsored attempt to remove the King amendment from the Farm bill was defeated 33-13 with a majority of Democrats and almost every Republican supporting the provision. Nevertheless, HSUS and other animal rights groups are hard at work to make sure the King amendment is stripped from the final version of the farm bill, because they know it is a direct attack on their overall agenda - "to eliminate ALL animal agriculture." (Quote attributed to Paul Shapiro, HSUS VP Farm Animal Protection, 2004 National Student Animal Rights Conference)

“If California’s liberal imperialists want to impose their social and economic agenda on the rest of the country, they have to go through Congress. Sacramento isn’t the capitol of America, thank heavens.” - WSJ Article

If you agree that Sacramento isn’t the capitol of America, leave a comment below and tell us why! [polldaddy poll=7342405] To read the article, click here. We understand that in order to read the WSJ a subscription is required, so that’s why we’ve summarized the article. But if you get a chance to read the entire article, it’s worth your time to help you better understand the purpose of the King amendment.
Prev Article
PETA Takes It One Step Too Far
Next Article
Animal Rights Group Targets the Iowa State Fair 'Butter Cow'