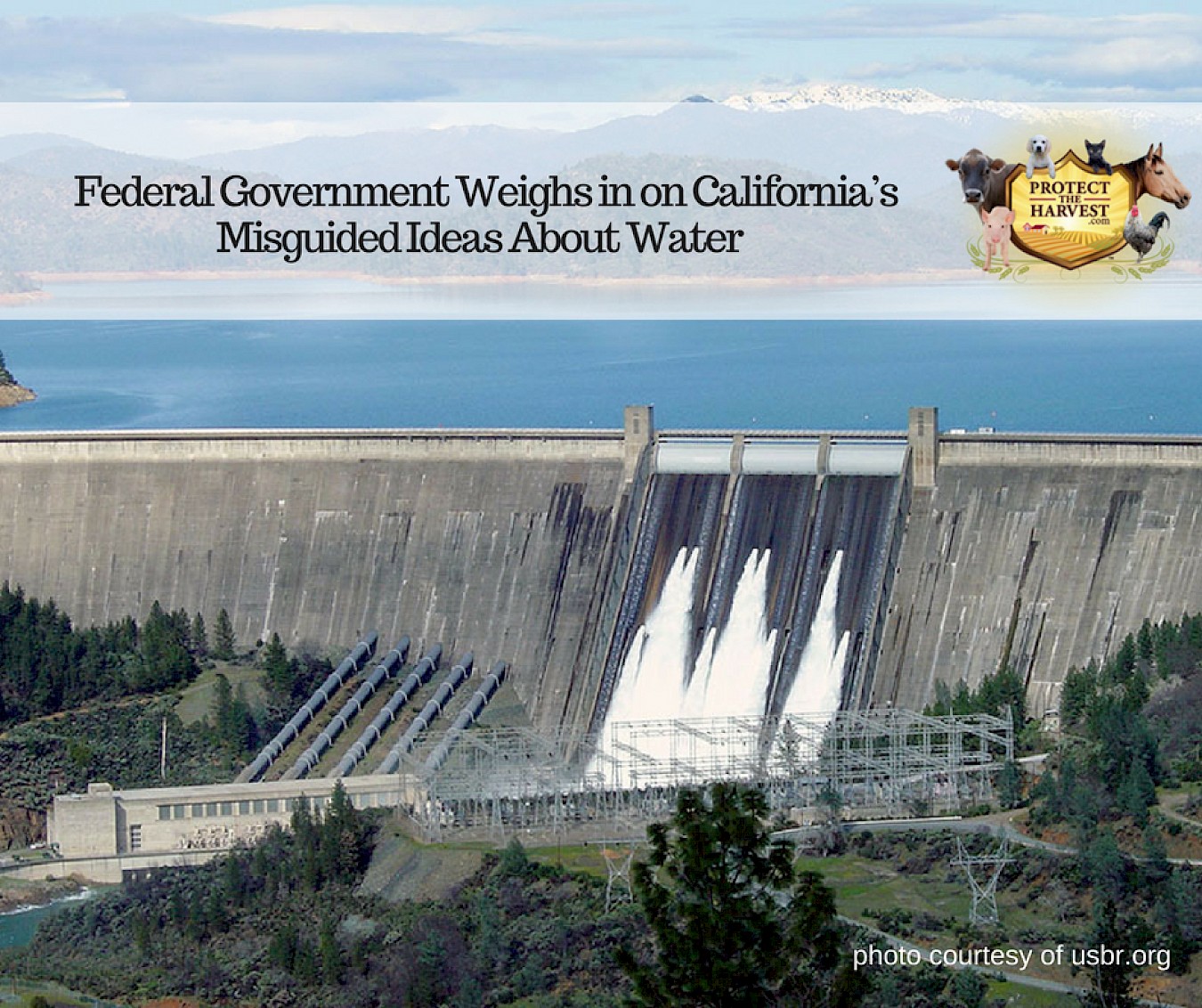 FEDERAL GOVERNMENT WEIGHS IN ON CALIFORNIA’S MISGUIDED IDEAS ABOUT WATER

The United States Department of the Interior, Bureau of Reclamation, wrote a comment to California State Water Resources Control Board (CSWRCB) Chair, Felicia Marcus, on July 27th. This was in response to the CSWRCB’s amendments to the Water Quality Control Plan for the San Francisco Bay/Sacramento-San Joaquin Delta Estuary. The comment submitted by the Bureau of Reclamation urged the board to reconsider their amendments and postpone the public meeting scheduled for August 21-22, 2018.

The water issue is a complicated one, and the topics in this article are no exception. In the following paragraphs we will discuss:

In a nutshell, the California State Water Resources Board was informed by the U.S. Department of Interior, Bureau of Reclamation, that the CSWRCB does not have, “….unfettered discretion to impose regulatory constraints that interfere with the congressionally authorized purposes of the Reclamation Project.” Most importantly, the comment warned the CSWRCB; should they proceed with their amendments and plans outside of the guidance of the Bureau of Reclamation that the Secretary of the Interior will ask the Attorney General to bring action against the CSWRCB.

Clarifying the Original Purpose of the Central Valley Project

Who is the Bureau of Reclamation?

The United States Bureau of Reclamation(USBR), and formerly the United States Reclamation Service (not to be confused with the Office of Surface Mining Reclamation and Enforcement), is a federal agency under the U.S. Department of the Interior. The Reclamation is a contemporary water management agency that outlines various programs and initiatives that assist Western States, Native American Tribes and others meet new water needs. The USBR is known for their dams, powerplants and canals constructed in 17 western states that helped the economy and homesteading in the West. They have constructed over 600 dams and reservoirs, which includes the Hoover Dam on the Colorado River. Today, they bring more than 31 million people water and provide 10 million acres of western farmland with irrigation water.

The comment by the Bureau of Reclamation points out that the amendments proposed by the California State Water Resources Control Board (CSWRCB) elevates fish and wildlife purposes over irrigation and domestic purposes, which is contrary to the prioritization scheme established by Congress.

The California Water Resource Control Board’s analysis of the project and the storage capabilities of the New Melones Project and Central Valley Project are different from what the Bureau of Reclamation found. The New Melones Project includes a large reservoir, as previously mentioned, but it is dependent upon the hydrology of the Stanislaus River, which is highly variable. The amendments proposed by the California State Water Resources Control Board will interfere with the New Melones’ ability to store water. Most importantly, the amendments seek to allow management of the projects by others rather than the Bureau of Reclamation.

Proposed Amendments Do Not Consider All of the Alternatives

The CSWRCB’s amendments focus on increased flow for fish in the Stanislaus River. The Board of Reclamation comment stated that the CSWRCB is not considering the other factors affecting fish species, as well as alternatives for species recovery, for example the Anadromous Fish Restoration Program, authorized by the Central Valley Project Improvement Act. The other stressors on the fish population include: predation, temperature, interaction with hatchery fish and lack of spawning and rearing habitat. It has also been discovered that, while flow timing and quantity are equally important, the current flow outlined by the CSWRCB is excessive for adult fish response.

The Reclamation commented also on the loss of recreational activity, due to the lower levels of the lake if the Board’s amendments are approved. Lower levels negatively impact recreational activities and could be bad for local economy. If the CWRCB plan is implemented via the amendments, the lake will continue to face lower capacity levels and, therefore, less visitation.

This comment, coming from the Department of the Interior and the Board of Reclamation, clearly demonstrates support in Washington D.C. for the farmers and residents in the California Central Valley. It outlines that the directive from Congress regarding the Central Valley Project prioritizes irrigation over fish and wildlife enhancement in the plan, and the CSWRB amendments do not follow such directives.

With such a powerful entity voicing their opinions on such an important issue for California farmers, this could change the way water is stored and made available for farming communities. The Secretary of the Interior will review the issue further. Should the Bureau of Reclamation determine the amendments are inconsistent with the aforementioned responsibilities, the Attorney General of the United States of America will bring action against the CSWRCB.

To read the letter in its entirety, follow this link: https://denham.house.gov/uploadedfiles/doi_water_grab_comment.pdf