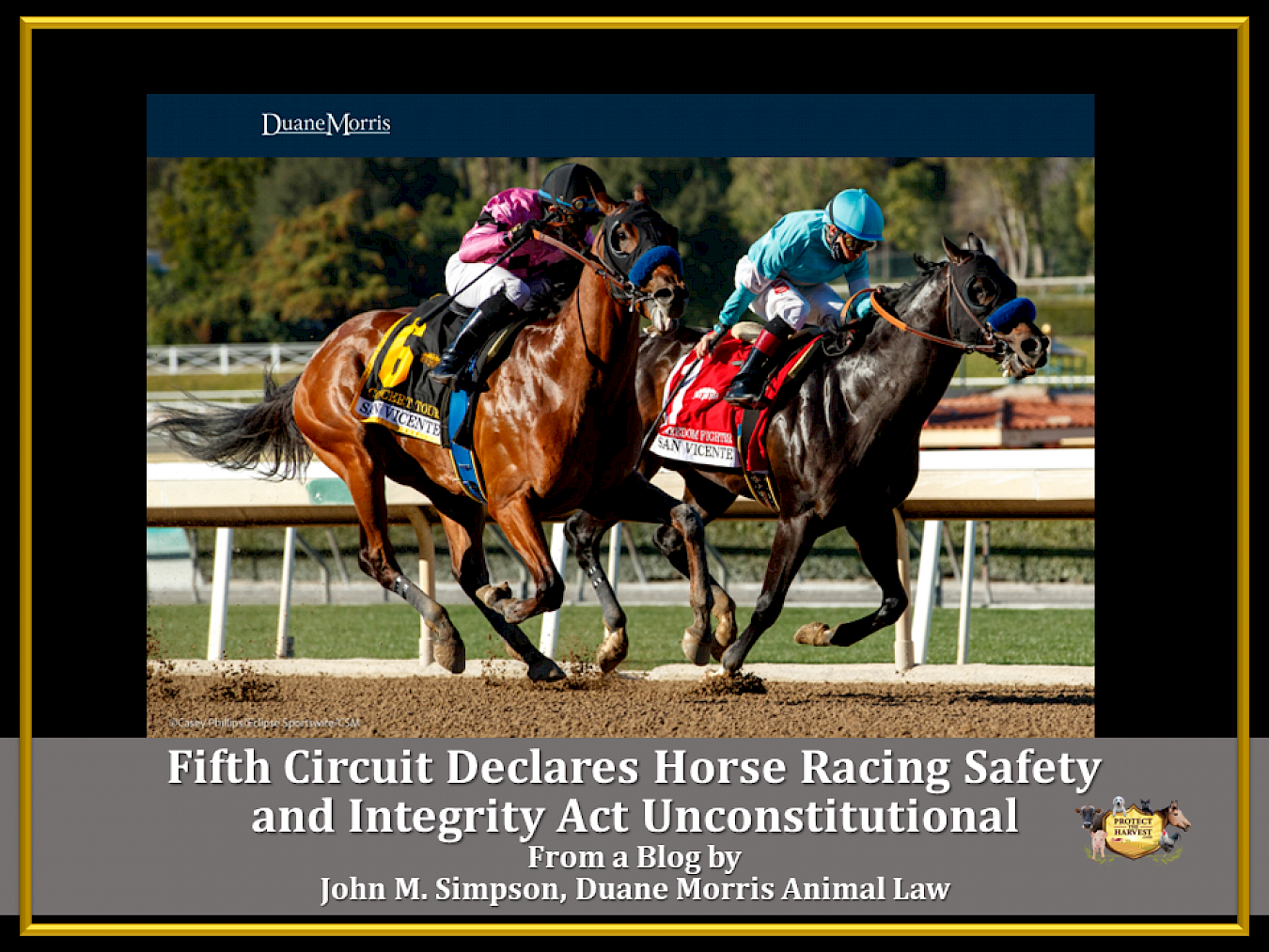 In 2020, Congress passed, and President Trump signed, the Horseracing Integrity and Safety Act (HISA) which empowers a private entity — the Horseracing Integrity and Safety Authority (Authority) — to formulate regulations applicable to the horseracing industry. On November 18, 2022, a panel of the U.S. Court of Appeals for the Fifth Circuit invalidated HISA as an unconstitutional delegation of authority “vesting government power in a private entity not accountable to the people.” Nat’l Horsemen’s Benevolent Ass’n v. Black, No. 22-10387, slip op. at 4 (5th Cir. Nov. 18, 2022).

HISA established the Authority, which is a nonprofit corporation with a nine-member board, five of whom are to be independent and selected from outside the equine industry. HISA conferred upon the Authority broad authority to formulate regulations for the horseracing industry governing racetrack safety, anti-doping and medication control. The Authority formulates proposed rules which are subject to review by the Federal Trade Commission (FTC). If the FTC determines that the Authority’s proposed rules are consistent with HISA, it must publish them for public comment. If the FTC disagrees with the Authority’s proposals, the FTC can recommend, but cannot mandate, revisions. In limited, emergency circumstances, the FTC can issue interim rules but must invoke the “good cause” exception to the federal Administrative Procedure Act.

After its formation, the Authority issued “minutely detailed” rules concerning racetrack safety, enforcement procedures and registration requirements and procedures. Organizations representing thoroughbred racing interests sued the Authority and the FTC and challenged the constitutionality of HISA on multiple grounds, including that the statute is an unconstitutional delegation of legislative power to a private entity. The district court ruled in favor of the defendants, but the Fifth Circuit reversed:

The end result [of HISA] is that Congress has given a private entity the last word over what rules govern our nation’s thoroughbred horseracing industry. The Constitution forbids that. For good reason, the Constitution vests federal power only in the three branches of the federal government. Congress defies this basic safeguard by vesting government power in a private entity not accountable to the people. That is what it has done in HISA. The Authority’s power outstrips any private delegation the Supreme Court or our court has allowed. We must therefore declare HISA facially unconstitutional. [Slip op. at 4].

The Fifth Circuit’s analysis that HISA violates the private non-delegation doctrine proceeded along four basic lines. First, the sweeping rulemaking power conferred upon the Authority, coupled with the minimal approval powers vested in the FTC (including the FTC’s power to issue emergency “interim” rules), made it clear that the Authority was not subordinate to the FTC:

[O]n its face, HISA’s generous grant of authority to the Authority to craft entire industry “programs” strongly suggests it is the Authority, not the FTC, that is in the saddle. . . . . That the [FTC] can make temporary rules on a break-glass-in-case-of-an-emergency basis does not suggest the agency is superior to the Authority. It suggests the opposite—that the Authority is in charge. [Slip op. at 22-23].

Second, while the FTC has the power to review the Authority’s proposed rules for “consistency” with HISA, the FTC has no power to reject a proposed rule on policy grounds which “falls short of the ‘pervasive surveillance and authority’ an agency must exercise over a private entity.” Slip op. at 25. As the court explained:

[W]hatever “consistency” review includes, we know one thing it excludes: the Authority’s policy choices in formulating rules. . . . The Act’s division of labor is clear: the Authority writes the rules; the [FTC] may suggest certain changes, but the Authority can take them or leave them. [Slip op. at 26, 29].

Unlike HISA, the Maloney Act empowers the SEC to “abrogate, add to, and delete from” FINRA rules “as the [SEC] deems necessary or appropriate[.]” . . . [A]lthough FINRA plays an important role in formulating securities industry rules, its role is ultimately “in aid of” the SEC, which has the final word on the substance of the rules. . . . The Authority not only formulates and proposes horseracing industry rules but, given the limits built into the FTC’s oversight, it also has the final word on what those rules are. [Slip op. at 30].

Fourth, the protracted litigation in the D.C. Circuit involving Amtrak showed that the HISA is unconstitutional. The D.C. Circuit had ruled that the delegation of power to Amtrak exceeded the limits set by the Supreme Court for reasons similar to the issues raised by HISA. Amtrak helped to craft the relevant regulations and had the authority to “check” the regulatory authority of the Federal Railroad Administration. Slip. op. at 34.

The Fifth Circuit’s decision does not bring an end to all forms of regulation over the horseracing industry. As the court observed, for most of American history, “horseracing has been regulated by the States, local communities, and private organizations.” Slip op. at 5. But the case does deal a serious blow to supporters of HISA. Another challenge to the same statute is pending on appeal in the U.S. Court of Appeals for the Sixth Circuit. State of Oklahoma v. U.S., No. 22-5487 (6th Cir.).