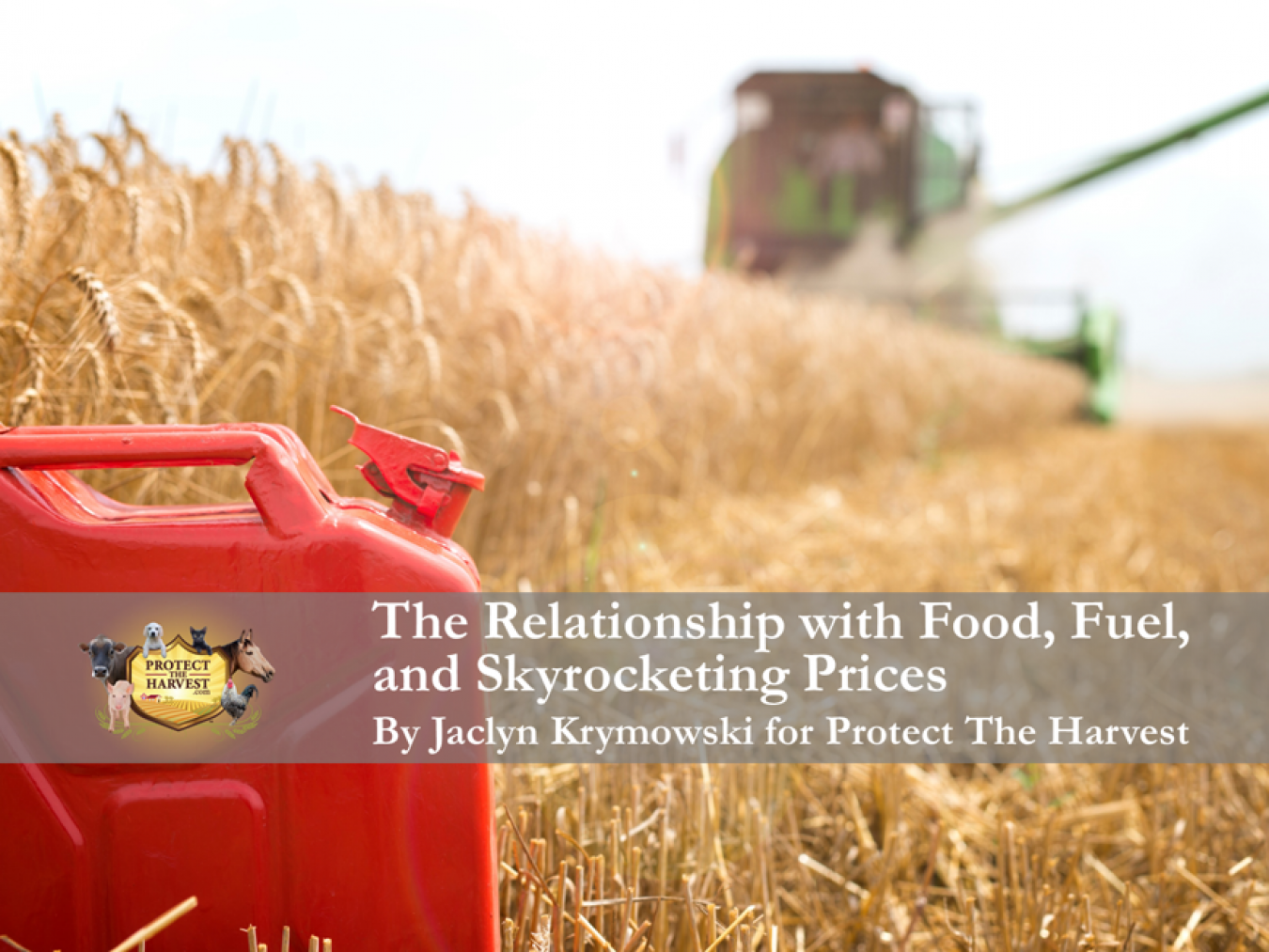 The Relationship with Food, Fuel, and Skyrocketing Prices

Many Americans are struggling to keep up with the rising cost of living. Today, two-thirds of us are living paycheck-to-paycheck and our monthly food bill is rising faster than it has in four decades. Even affluence doesn't ensure you will not have to choose between putting food on the table or fueling the car.

The Cost of Food

Food prices are an intrinsic component of the cost of living. They directly impact all people across all income brackets. When the economy is volatile and food costs rise, the gap between the impoverished and the affluent widens along with access to food.

COVID is Being Blamed by Mistake

Many people point to COVID having initiated our current situation. This is understandable as many Americans had never experienced bare store shelves for basic essentials like toilet paper, meat, dairy, disinfecting wipes, pasta, canned goods, and pet food. Though farmers and ranchers, food processors, distributors and transporters did their best to stock shelves, America went through an experience likened to the days of rationing during World War II.

Two years after COVID, we are no better off. This situation sheds light on a storm that has been years in the making and reveals chinks in the armor of the U.S. food, fuel, and political systems.
Our food supply chain that has historically been the envy of the world is teetering on collapse. The entire chain is facing challenges that place the country's food security at grave risk. This is due to poor policies and misplaced priorities that have cumulatively weakened our essential industries.

The current political climate puts heavy emphasis on supporting small volume renewable fuels that are unreliable. There are also more restrictions in place for oil, gas, and coal production and exploration on the domestic front.

When the current administration tapped into the nation’s Strategic Petroleum Reserve (SPR) to add a temporary supply of additional fuels to ease consumer pain at the pump, it also exported oil. The SPR is currently at its lowest point since 2004, leaving the U.S. vulnerable.

Decisions like these are misplaced and do not address the actual issues. This results in passing costs onto you and me, the consumers at the end of the supply chain.

One major influence on the discussion related to food and energy is the environment. The impact of climate change and its relationship to necessary industries are continually pushed by environmentalists. This emphasis has led to global movements that want to reduce fossil fuel use despite insufficient and expensive alternatives. Policies have also embraced this mindset, putting further pressure on both food and production systems to balance their efficiency and their sustainability while trying to reduce emissions and carbon footprints.

Adding to the stress of the food production and distribution systems are shortages in fertilizers. The situation is even worse for farmers when fertilizer costs and shortages are combined with climbing prices for fuel. These add significantly to operation costs which surpass the year’s budget for farmers. On the farm level, this has led to higher costs to produce food per acre across the board.

Some experts predict that there may be long-term shortages due to decreased yields from productivity issues thanks to the bonds of a turbulent economy.

Rising oil, gas, and diesel prices have directly increased the costs of producing and distributing goods in obvious ways.

In an article for the Columbia Tribune, Pat Westhoff of the Food and Agricultural Policy Research Institute at the University of Missouri noted:

Westhoff mentioned price increases at the retail level are largely due to price increases in fuel that is used to operate trucks and farm machinery. Additionally, these high prices have impacted other processes on the farm, like drying grain, contributing to heightened on-farm costs of production and retail-end food prices.

Fuel and oil shortages can also force farmers to cut back on production. This quickly leads to widespread shortages of commodities highly reliant on mechanized planting and harvesting such as corn, grains, and oilseeds. Not just for human consumption, these commodities directly impact the production and availability of livestock feed.

The Global Fertilizer Crisis and the Relationship to Fuel

The cost and availability of fertilizer, much like food, is tied to fuel costs. With much of the sector reliant on imports, there are increased shipping costs and limited availability for moving the product to the farmers who need them.

Fertilizer shortages are also to blame for higher food costs, largely due to global issues and obstacles to producing and transporting them. For example, natural gas prices have indirectly impacted fertilizer prices because gas is used to produce the nitrogen used in fertilizer. Corn and wheat have shouldered the burden as fertilizers make up a larger share of production costs than other crops.

Another factor is the ongoing conflict between Russia and Ukraine - two major global fertilizer exporters.

Russia is a major contributor to the world’s supply of potash, urea, and ammonium nitrate. According to Morgan Stanley, Russia and Belarus contribute a combined 40% of the world’s supply of potash used in fertilizer. Russia singlehandedly exports 11% of the urea and 48% of the ammonium nitrate used for fertilizer. For all fertilizers containing nitrogen, phosphorus, and potassium, both Russia and Ukraine export 28% collectively.

Although the United States produces a significant amount of its own nitrogen and phosphorus, the USDA report notes it relies on imports of potassium-based fertilizers.

The rise of natural gas prices has also led to decreased ammonia production in Europe, which is necessary for nitrogen-based fertilizers. Furthermore, increased coal prices and electricity rationing in China resulted in decreased phosphate exports.

According to a U.S. Department of Agriculture (USDA) International Trade Report from June 2022, fertilizer prices accounted for approximately 20% of the farm cash costs. Between 35-36% of a corn and wheat farmer's operating costs can be tied directly to fertilizer. This shortage won’t only impact the remainder of this year, but it can easily roll over into 2023. This means many of the high costs we are seeing will likely remain for the foreseeable future along with more severe commodity shortages.

Food Security is at Risk

While the production of meat and dairy foods has largely rebounded from the 2020 shortages, prices have not recovered. Many Americans are no longer able to afford basic foods due to the increased prices caused by inflation and the cost of production.

Compounding the matter, prices will likely continue to rise in the foreseeable future, which creates an access barrier and food inequity for those struggling with poverty.
Headlines and conversations abound with discussions on shortages and looming supply chain issues. All relate to the much larger topic of food security, which is often misunderstood or mischaracterized.

As defined, food security is a concept of having safe, quality food that is accessible and attainable. The current state of affairs has not only made production and retail distribution difficult but also less affordable.

In some cases, the struggle with food security is not so much about cost, but availability. A great example of this would be the recent formula shortages. Not only was this a disruption in supply, but the devastation was compounded by import issues.

Imports and exports are a recurring theme in the food security discussion. Unfortunately, these are the result of a globalized era with minimal energy independence.

The U.S. is not alone; other countries struggle as well to feed their populations. Many are imposing restrictions on imports or limiting exports.

Food and fuel are the backbone of all other industries. For a strong economy and nation, wise policies and support that points to energy and food independence rather than a reliance on international politics are necessary.

Greater independence would also translate to decreased fuel and energy costs. This would in turn contribute to lower costs of food production and greater food equity for all Americans even in economically turbulent times. In recent years, we’ve seen firsthand how global incidents affect our economy and production systems.

The answer to the food and fuel dilemma is complex. Until we put in place common sense, and practical measures, we are bound to repeat mistakes and continue to travel down the same path. Food and fuel issues have many faces and perspectives, but at the end of the day, they are subject to policies and financing that can harm or hinder them.

The struggles we see today are likely to remain with us until focus is put in the right places.