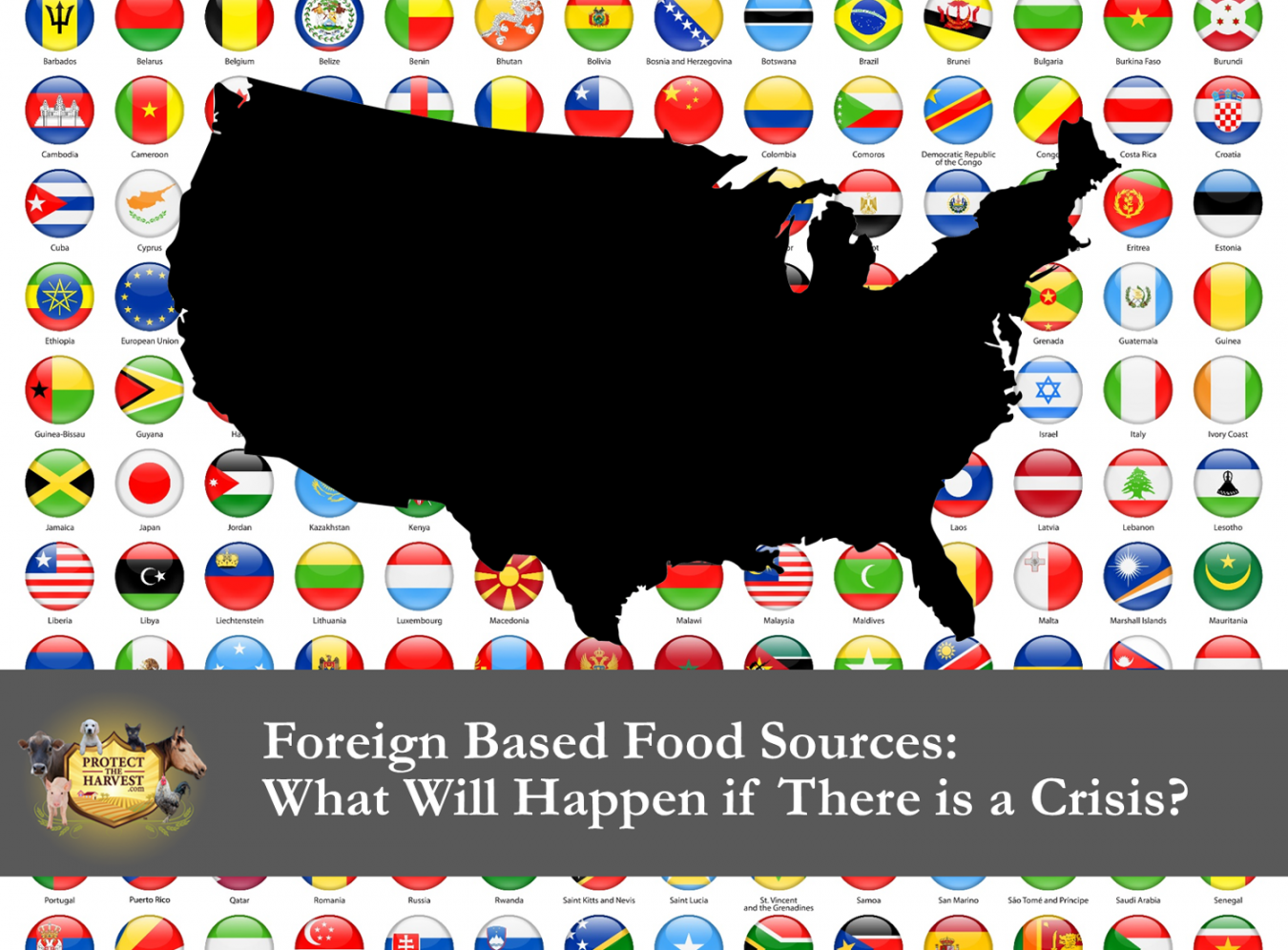 Foreign-Based Food Sources: What Will Happen If There Is a Crisis?

In the unprecedented turmoil our nation has faced in recent years, shortcomings in existing policy have been made painfully clear. The most alarming problems are those revealed within our food supply chain. These issues affect all Americans, but do the greatest harm to those already struggling with food security.

Mandated shutdowns, newly instituted governmental policies, and international disputes have forced American consumers to face the reality of severely disrupted supply chains and shortages of essential goods. Those issues offer just a glimpse of the deeper overall vulnerability of our national food security.

These crises have highlighted two related areas of increasing concern: reliance on foreign-based food sources, and foreign ownership of American farmland. These issues have been a concern of certain policymakers for some time. However, many Americans have been largely unaware of the impact that foreign ownership has on our food supply and food security.

U.S. Senator Chuck Grassley’s website states:
“Food security is national security. If foreign buyers, especially those backed by government regimes, are buying up prime farmland in America as a strategy to dominate food production, there are obvious concerns about protecting our ability to feed our own people.”

Most of that land is owned by Canadian investors, followed by the Netherlands, Italy, Germany, and the United Kingdom, but 38% is owned by investors from nearly one hundred other countries. The increasing concern regarding Chinese ownership of American farmland is certainly not unmerited, but in terms of acres, Chinese investors own less than 200,000 acres.
Six states in the U.S. have laws prohibiting foreign ownership of land: Hawaii, Iowa, Minnesota, Mississippi, North Dakota, and Oklahoma. Some states limit how much land can be owned by foreign interests, but most states have no restrictions. Foreign holdings are most highly concentrated in Texas, Maine, and Alabama. However, even with those laws in place, loopholes in the law have been utilized. An example of this can be seen with foreign investments in land for grow houses in Oklahoma.

It Is Not Just Acres – Other Resources Are Key Concerns

Since the amount of land owned by foreign entities is relatively small, the greatest concerns around foreign ownership aren’t necessarily about the quantity of acres. The apprehension lies in how those acres, resources, and items produced are used.

A prime example is Arizona, which has no laws or limitations on pumping groundwater as long as it is put to “beneficial use,” regardless of what is produced or where it is utilized. Such loose regulations are already leveraged by companies from other states, and in one particular area near a 10,000-acre Saudi-operated hay farm, the wells of life-long residents are going dry.
Another example can be found in the highly publicized purchase of pork giant Smithfield. In 2013, the China-based WH Group purchased the company. Included in the purchase was nearly 150,000 acres of prime farmland in Missouri. However, the real concern is that the vertically integrated WH Group owns and controls every step of its supply chain, from farm to market. During the pandemic, even while the U.S. faced widespread meat shortages, Smithfield increased pork exports to China. In addition, several Smithfield plants were closed further amplifying the meat shortages. The reasons for the closures have ranged from allegedly poor working conditions to egregious over-regulation placed on livestock producers in certain states, specifically, California.

The Danger of Reliance on Foreign-Based Food Sources

Ripple effects of international disputes are demonstrating some of the risks of the globalized food supply chain. War itself, as well as related sanctions and blockades put in place, have disrupted the exports of essential goods and exacerbated shortages around the world. The two main exports affected are fertilizer products and grain crops.
Russia is the world’s largest exporter of ammonium nitrate fertilizers and produces significant amounts of potash, urea, and fertilizers made with nitrogen and potassium. In 2021, the United States imported $1.28 billion of fertilizer products from Russia. Sanctions on Russia severely limited the supply of fertilizer available to other nations, including the United States.
The limited supply and resulting increased cost of fertilizer has hit US farmers hard, as they have already been facing heightened costs of other production inputs such as fuel and seed. Some fertilizers have even doubled in price. Thus, farmers have been forced to limit the amount of land they plant and/or cut back on fertilizer use, which result in reduced overall production. Due to the resulting reductions in supply, consumers face increased prices of not only grains, vegetables, and fruits, but also meat products because most livestock are fed grains and other farmed feeds.

While the U.S. has been affected mainly by the fertilizer shortage thus far, other nations have been devastated by the shortage of grains coming out of Ukraine. According to the FDA, the United States imports only about 15% of its total food supply, but many nations rely almost entirely on imports to feed their populations. Currently, there are at least 34 countries that are unable to produce sufficient amounts of food.
“We are absolutely facing a problem of catastrophic proportion here,” said Tony Will, the CEO of fertilizer giant, CF industries. “Not only is the issue lack of availability and affordability of nutrients and inputs, but Russia and Ukraine have historically exported about 30% of the global wheat trade and 20% of the global corn trade.” At this point, total grain exports from Ukraine are roughly half of the amount exported in normal years. Further, the Ukraine agrarian council has stated that wheat plantings for the 2023 harvest could fall by 30-40%.

Nations such as Afghanistan, Yemen, and Lebanon are already facing severe hunger crises. In Lebanon, approximately 75% of the population lives in poverty. Before the war, the nation imported nearly 80% of its grain from Russia and Ukraine; with that supply sharply curtailed, prices of staple food items have skyrocketed. Even before the Russia/Ukraine war, the cost of food accounted for 50-60% of spending in many African countries; therefore, a 50% rise in the price of essential grain products such as bread and cooking oil is entirely unaffordable.

Food is the Foundation of Civilization

U.S. Senators pushing for food aid money have expressed that mass starvation in poverty-stricken nations is a real, impending threat. This could lead to a very real possibility of mass migration and political destabilization in North Africa and the Middle East. This would further result in threats to the national security of the United States and other countries. The threat does not end there.
“Resilience and sustainability in food production and distribution, along with ensuring everyone can afford to eat a healthy diet, constitute a foundational building block in our civilization,” wrote Will Hutton in The Guardian.
If the foundation crumbles, so does modern society itself.

What Happens In Crisis

The current food crisis exists at some level everywhere around the globe. Whether it’s due to a lack of resources to buy available food, or a diminished or nonexistent supply, people are going hungry. Hunger breeds desperation. The grim reality is that the situation cannot be alleviated without a drastic change in worldwide leadership and policy.
It is the duty of every one of us to stay informed and help educate others.

Now, more than ever, our domestic food supply and the producers that bring it to us need to be supported.

We must do all we can to preserve a free and fed America.