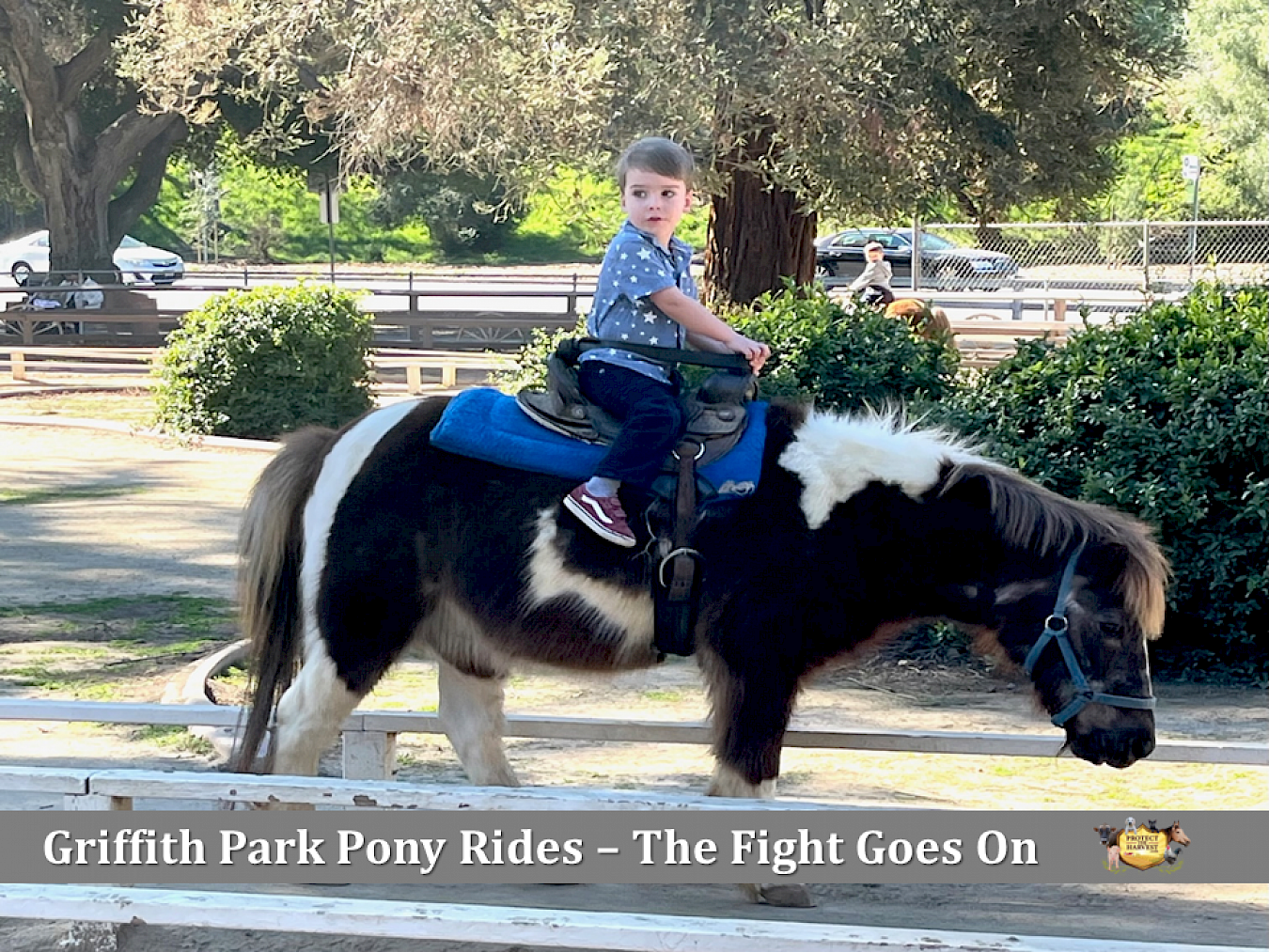 Just a few months ago, after a hard-won fight against animal extremist protestors, the Los Angeles Recreation and Parks Department awarded the owner of Griffith Park Pony Rides an extension of his contract. However, this has not deterred animal extremist groups. Instead, they have ramped up their harassment and they show no indication that they will back off their ridiculous claims. A review of the Los Angeles Alliance for Animals Facebook page, shows they are gathering more and more paid protestors to come and disrupt a lawful, and highly regulated business.

The Griffith Park Pony rides have, in good faith been open to suggestions. They have made all improvements recommended and have gone above and beyond those recommendations and suggestions by hiring a full-time Animal Welfare Officer. The job of the Welfare Officer is to ensure the ponies are being given top-level care and making sure they are not being overworked.

As all horse people know, horses like routine, and moving an aged animal away from its herd, its companions, its home, is often the stressor that causes a rapid demise. It is also true that horses who have a “job” to do, live longer, healthier lives than those moved somewhere away from their home of many years, with care not like what they’ve become used to. To address this, the ponies who are deemed too old to work, are being retired in the Griffith Park Pony Sanctuary which means they are living their lives out in the home where they have lived for many years.

Unfortunately, the extremists who participate in these unlawful protests could care less about the health and welfare of ponies, nor do they care about people in general. If they cared, they wouldn’t be disrupting the pony rides and conducting behavior that has the possibility of spooking a pony and injuring a child.

Mr. Weeks, owner of Griffith Park Pony Rides, has complied fully with the recommendations and gone above and beyond, but they DO NOT CARE. They want their agenda heard…and obeyed. Yes, OBEYED. If these animal extremists prevail and shut down the pony rides, they won’t stop. They will continue to push until all equestrian sports are abolished. Until all livestock shows are declared illegal and all pet ownership is a thing of the past.

There is No Compassion For Humans

Not only does Los Angeles Alliance for Animals and their ilk have no compassion for animals, but they also have no compassion for humans. In addition to behavior that could spook a pony and injure both the pony and children, the animal extremists are threatening parents, employees, and Stephen Weeks, the owner of the pony rides. They have made repeated threats including death threats against parents of children riding the ponies, employees, and Mr. Weeks.

Due to the threats made against Mr. Weeks, his employees, and patrons, Los Angeles Police Department has been making arrests, but as we’ve seen with other extremist groups, they simply return and continue their harassment.

Below is an update from Mr. Weeks as posted in a Facebook group:

It has been some time since I reported to you the latest information from Griffith Park Pony Rides. Unfortunately, things have not gotten better. I have now received “death threats”, which detectives from the LAPD are investigating, while my young employees are assaulted with violence threats and obscene insults. The same extremist animal rights protesters continue to harass our customers and employees. Regular arrests are made under the new safety ordinance passed for the safety of the public and our ponies, but protesters continue to spread misinformation and outright lies. They claim we hit or abuse our ponies which is of course not true. They often instigate fights with our parents who are only here to enjoy a fun experience with our wonderful ponies like millions of other Angelinos over our 73-year history.

As you know we have had multiple Vet inspections, weekly Vet visits, inspections from the Los Angeles Animal Services and other governmental agencies and have found to be compliant with all animal welfare laws. We have hired a full-time Animal Welfare Officer just to assure our ponies receive the best of care. We provide daily ongoing care for our working ponies and our own sanctuary care for our older ponies who we have retired to live out their life on our property without work because of all they have given to the children of Los Angeles.

We need your help in this fight for the pony rides and horse ownership in Los Angeles. While we are attacked by these extremist animal activists today, it could spread to all horse owners next. Please show your support by contacting The Department of Recreation and Parks and register your support for Griffith Park Pony Rides, by emailing Rap.commissioners@lacity.org

NOTE: In the comments below I am attaching one of the latest telephone messages we have received at the pony rides from the protesters so you can hear for yourself the illegal threats they are making. WARNING. If you choose to listen, this message contains obscenities. Do not let children hear this recording.

In December, the one-year extension granted to Griffith Park Pony Rides will expire and the extremists are counting on the local government to bow to their will and deny Mr. Weeks another extension. These extensions were part of his contract signed in 2017.
If you are concerned that this beloved part of Los Angeles’ heritage and tradition will be forced to end its 70+ year existence, contact the Department of Recreation and Parks and offer your support by emailing rap.commissioners@lacity.org.

Allowing the extremists to win, means everyone loses.