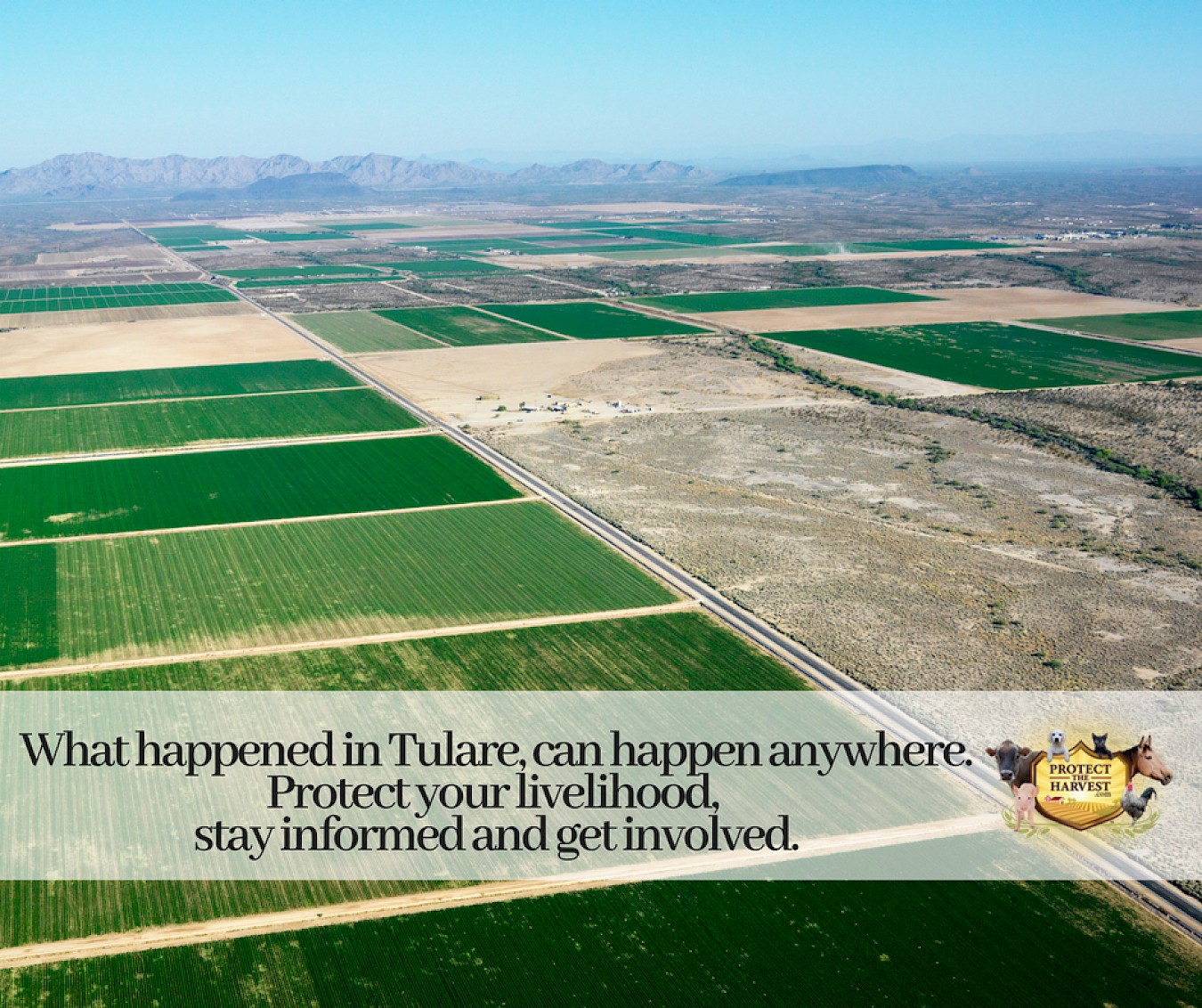 WHAT HAPPENED IN TULARE, CAN HAPPEN ANYWHERE

What happened in Tulare, can happen anywhere.

How familiar are you with your political representatives? Do they share your same views about the agricultural industry, or do they attack your livelihood? The stance your local and state politicians make can be detrimental to your business and hobbies. Knowing who represents your community is crucial in the battle between you and the extremist groups looking to put an end to farming, ranching, land use, and animal ownership. A California Ag town recently learned this lesson.

Earlier this spring, now ousted Tulare Mayor, Carlton Jones, slandered the farmers and ranchers he represented with anti-agriculture statements he made in an argument on Facebook. The comments were “cut and paste,” anti-agriculture rhetoric that seemed as though they came straight from one of the many new activist backed anti-agriculture documentaries. His comments were then posted to the “My Job Depends On Ag” Facebook group, where his negative outlook on the agricultural industry caught backlash from the Ag community across the Nation. He went as far as saying, “Jobs don’t always depend on Ag. My job as Mayor depends on taxpayers. My job as a firefighter depends on accidents.” He said this while representing a community where 1 in 5 jobs are directly involved in agriculture.

The community rallied to remove Jones from office. Due to his comments, there were multiple city council meetings that included the promises from various companies and individuals to remove their business from the city. When asked to step down he declined, stating, “I’m not quitting.” He made other statements such as, “There’s no quit in me. If your happiness is based on my quitting, you’re going to be waiting a while.” He also showed no willingness to change his viewpoint during his argument on Facebook with comments like, “You can’t educate me. You’re trained. You can share with me what you’ve been trained to think. We can debate the difference between what you think and what I think.”

On June 19th, a second council meeting was held where he was voted out and replaced by David Macedo. Despite his ultimate willingness to step down, Jones left without showing much change in his opinions stating, “None of them, not one person, said we disagree with anything you said, we disagree with the way you delivered it. And I apologized for that. I apologize for allowing myself…to engage in an argument online. I’m not going to apologize for the things that I said.”

The fact that the 3rd top agricultural community in America didn’t know their own Mayor’s perspective drives home the need to be aware of who represents your community. In Tulare, this particular position is appointed by the City Council, rather than voted in by the community. Many Tulare residents weren’t aware of this either; nor did many know who Jones was previous to his comments on Facebook. The sad fact is that he had been in office since 2016. Luckily, with the power of social media, the good people of the Facebook group, “My Job Depends on Ag,” as well as the strength of the Ag community in Tulare and surrounding areas, his disparaging viewpoints about agriculture received National attention. A fire was sparked in the community, ultimately leading to his removal from office.

It Can Happen Anywhere

Please do not have a false sense of security as a result of the relatively swift and positive resolution of the Mayoral situation in Tulare. Despite his disparaging viewpoint of agriculture, the ousted Mayor still had plenty of support from outside the AG community, and this incident isn’t isolated. We will continue to see many positions in office held by those who don’t approve of agriculture or understand livestock or other types of animal endeavors. They hold these views in spite of the fact that they have no actual agricultural or animal experience and are totally uneducated about it. They push for further regulations due to misinformation from extremist influences.

Protect The Harvest has been sounding the alarm about these types of trends that allow anti-agriculture and anti-animal ownership ideologies to get a foothold in unsuspecting communities. Tulare is not the only community in which this type of thing has happened. There are countless situations where officials are elected that do not have their constituents’ best interests at heart. For example, in North Dakota, the animal rights group, the Humane Society of the United States, backed Measure 5. This legislation allows for an actionable claim, to be made by any out of state caller. It also allows for animals to be seized and sold without notice or hearing. Even though it was voted down, similar legislation was later pushed through. This was done despite the will of the people of North Dakota. Many residents were unaware that this legislation was made into law until a rancher experienced its impact. Fortunately, with the support of Protect The Harvest and others, he had the resources and know-how to fight back.

You can no longer take for granted that a community is represented by people who understand your challenges or needs. You can’t take for granted that the people who seek public office will be the right voice for their constituents. To protect your animals, your livelihood and way of life, we urge you to be proactive in your decisions when voting for representatives. Know who you are voting for and what organizations and individuals are contributing to their political campaigns. Not only do we encourage you to be knowledgeable about who is representing you, but to thoroughly investigate proposed legislation, administrative rule or ordinances as well. As we continue to stand up for agriculture, and fight for our way of life, we all need to pull together and make sure people are well informed. We can no long afford to be complacent. “Not having enough time”, is going to bite us all.