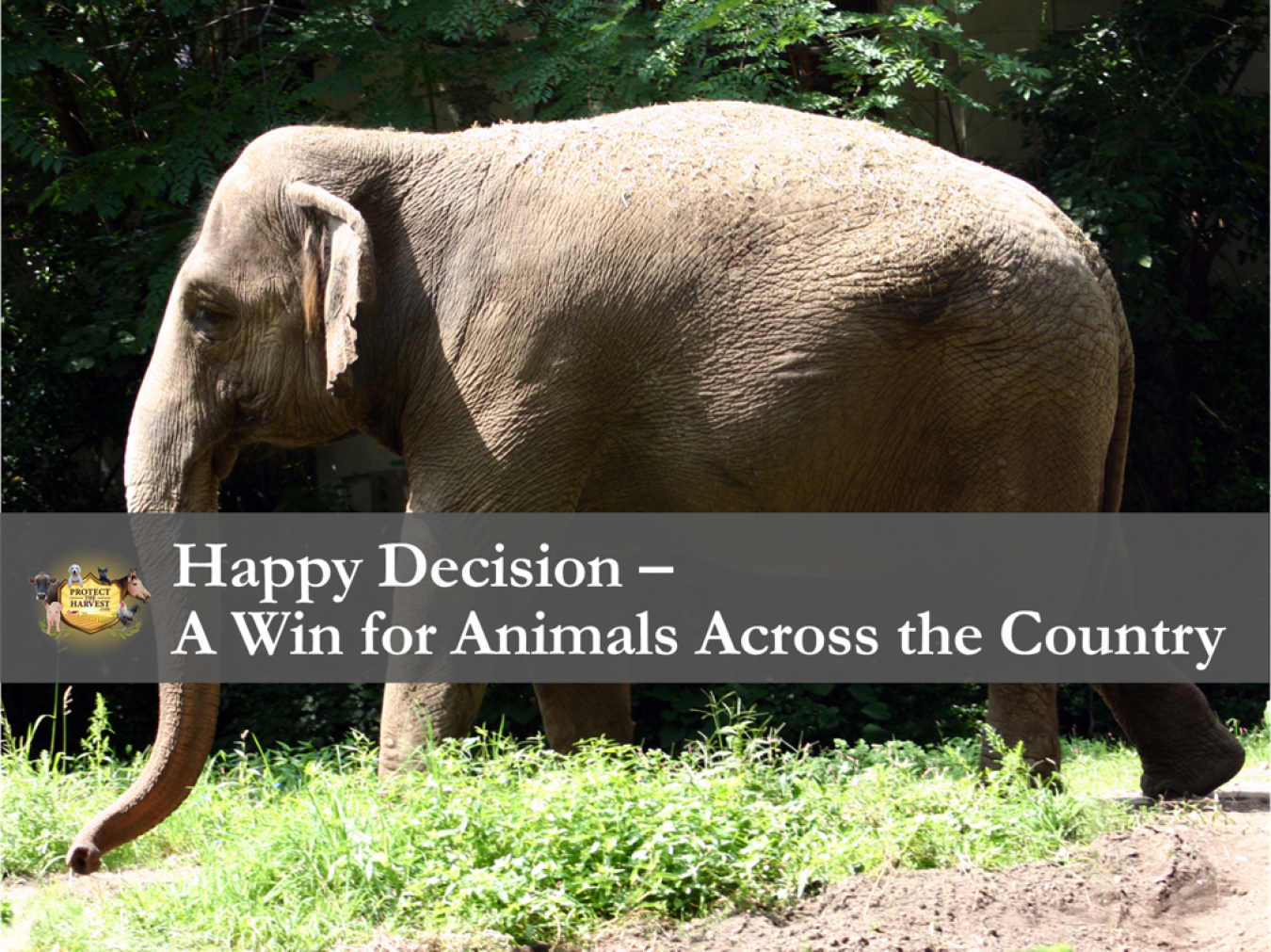 HAPPY DECISION - A WIN FOR ANIMALS ACROSS THE COUNTRY

Over the last few years, a legal fight has been going on in New York State between those who support animal welfare and those who subscribe to the animal extremist ideology. The negative outcome of this case would have had a devastating impact on animals across the country.

The case was repeatedly brought to court by Steven Wise and the NonHuman Rights Project (NhRP) Wise was attempting to give Happy the Elephant, who has lived for 44 of her 45 years at the Bronx Zoo, human status and claimed she was being held illegally as a prisoner. This is not the first attempt by Wise, NhRP, and other animal extremist groups to award personhood to animals and remove them from human care.

State of New York Court of Appeals Opinion, prepared by Chief Judge DiFiore opens with the following:
“For centuries, the common law writ of habeas corpus has safeguarded the liberty rights of human beings by providing a means to secure release from illegal custody. The question before us on this appeal is whether petitioner Nonhuman Rights Project may seek habeas corpus relief on behalf of Happy, an elephant residing at the Bronx Zoo, in order to secure her transfer to an elephant sanctuary. Because the writ of habeas corpus is intended to protect the liberty right of human beings to be free of unlawful confinement, it has no applicability to Happy, a nonhuman animal who is not a “person” subjected to illegal detention. Thus, while no one disputes that elephants are intelligent beings deserving of proper care and compassion, the courts below properly granted the motion to dismiss the petition for a writ of habeas corpus, and we therefore affirm.”

Judge DiFiore’s opinion also states:
“…We cannot agree; to do so would be to turn a blind eye to the impact of any ruling that elephants (or autonomous beings more generally) have liberty interests. A determination that Happy, an elephant, may invoke habeas corpus to challenge her confinement at the Bronx Zoo—a confinement both authorized and, by all indications, compliant with state and federal statutory law and regulations—would have an enormous destabilizing impact on modern society. It is not this Court’s role to make such a determination. As the Appellate Court of Connecticut cautioned in dismissing similar litigation by petitioner in that state, “[n]ot only would this case require us to recognize elephants as ‘persons’ for purposes of habeas corpus, this recognition essentially would require us to upend this state’s legal system to allow highly intelligent, if not all, nonhuman animals the right to bring suit in a court of law” (R.W. Commerford and Sons, Inc., 192 Conn App at 44). Granting legal personhood to a nonhuman animal in such a manner would have significant implications for the interactions of humans and animals in all facets of life, including risking the disruption of property rights, the agricultural industry (among others), and medical research efforts. Indeed, followed to its logical conclusion, such a determination would call into question the very premises underlying pet ownership, the use of service animals, and the enlistment of animals in other forms of work. With no clear standard for determining which species are entitled to access the writ, who has standing to bring such claims on a nonhuman animal’s behalf, what parameters to apply in determining whether a confinement is “unjust,” and whether “release” from a confinement otherwise authorized by law is feasible or warranted in any particular case, courts would face grave difficulty resolving the inevitable flood of petitions. Likewise, owners of numerous nonhuman animal species—farmers, pet owners, military and police forces, researchers, and zoos, to name just a few—would be forced to answer and defend those actions.”

Celebrating Today – Back to Work Tomorrow

We are celebrating this long-fought win in court today with the full knowledge that ideologues who believe in animal extremism will continue to press their agenda. There are other cases pending which have been filed by the same cast of characters. We are following their progress and will continue to both stand up for animal welfare and keep the public informed.

Call to Action on Behalf of Bronx Zoo HERE