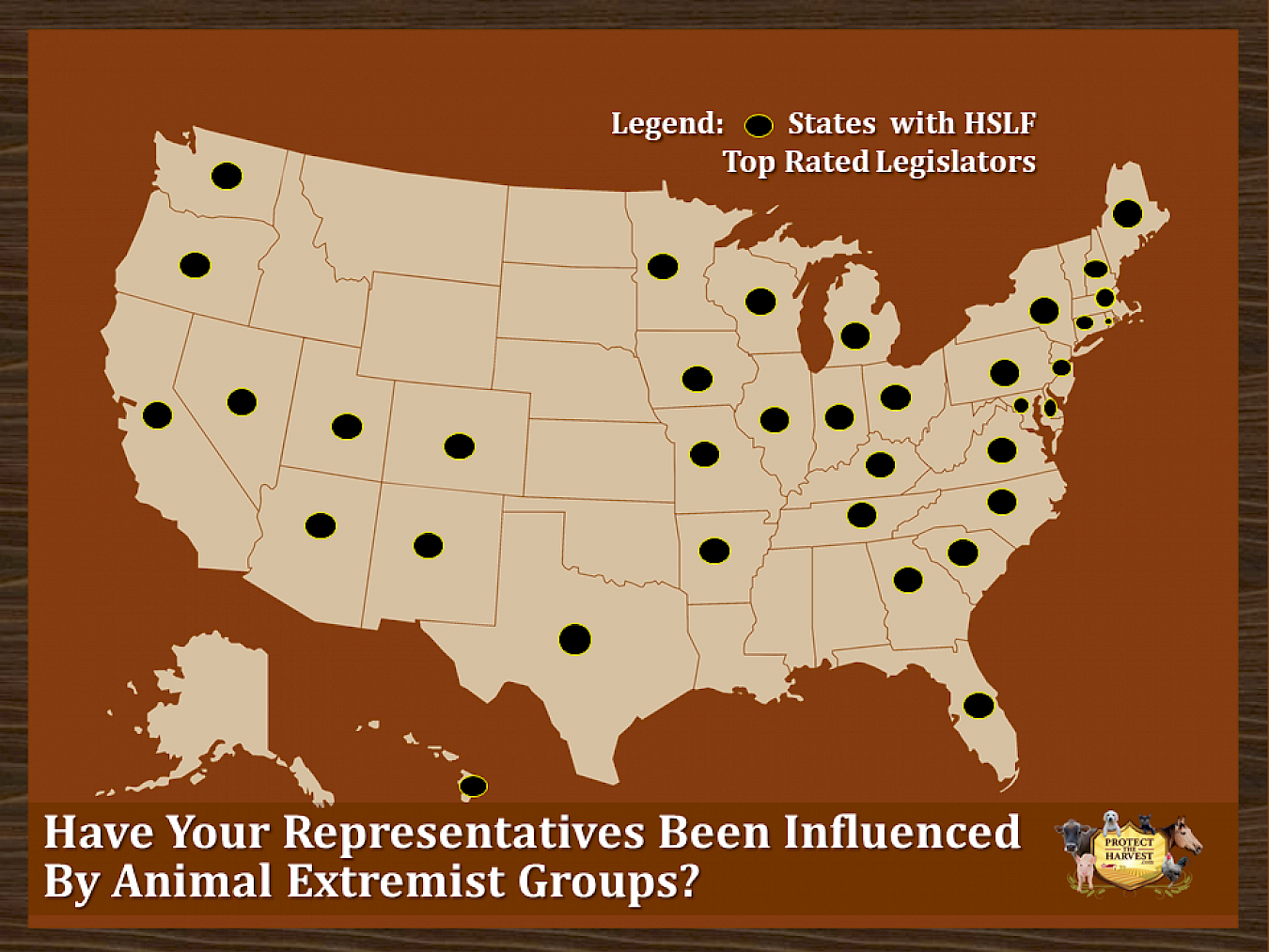 HAVE YOUR REPRESENTATIVES BEEN INFLUENCED BY ANIMAL EXTREMIST GROUPS?

NOTE: This map shows the states with top ranking legislators according to the Humane Society Legislative Fund. In the 100+ club, there are 47 senators and representatives. 36 out of 50 states have legislators that have received high ranking from the animal extremist movement and of those 36 states, there are a combined total of 205 senators and representatives of the house with a score of 80 and above.

Humane Society Legislative Fund (HSLF) is the legislative arm of the Humane Society of the United States (HSUS), sharing offices in Washington D.C. The HSLF spends millions of dollars to alter public policy and influence people they call “thought leaders” via campaign donations, publicity opportunities and special “awards”.
The HSUS and HSLF spend massive amounts of money to buy new laws and regulations, and to influence lawmakers to do their bidding. They are working to restrict the rights of farmers, ranchers, hunters, entertainers and animal owners by using lawmakers to sponsor legislation written, marketed, and funded by the HSUS and their various animal extremist partners.

Examples of this type of legislation include:

• California’s Proposition 12 – In 2018, a law was passed increasing regulations on pork, poultry, and veal producers. This law mandates that any egg, pork product, or veal product produced in the state or shipped in from another abide by the new regulations.
• California’s AB 485 –This law, signed in 2017, mandates that all dogs, cats and rabbits sold in pet stores must come from rescues or shelters, rather than federally licensed breeders which eliminates choices for animal owners.
• Massachusetts Question 3 – Similar to California’s prop 12, the measure mandates that all egg, pork and veal products produced there abide by the new regulations passed in 2016.
• Florida’s Proposition 13 – Funded by the HSUS and its affiliate Grey2K, prop 13 passed in 2018 effectively banning greyhound racing in the state.
• BLM Spay Feasibility Study – Eight Democratic U.S. senators signed and submitted an opposition letter to the Bureau of Land Management in regard to their spay feasibility study. The study’s intent is to test the viability of spaying as a tool for herd management and population control. All of these senators have a relationship with the HSUS.

The Humane Society Legislative Fund (HSLF) publishes a “scorecard” each year listing senators and representatives in each state alongside a score for their work regarding animal-related legislation. The scores range from 0 to 100+ and are based on whether they sponsored or co-sponsored bills that essentially push the animal extremist movement forward. The higher they rank, the more groups like HSLF, HSUS, ASPCA and PETA applaud them for their work.

No State is “Safe” From Animal Extremist Influence

One thing is sure, no state is “safe” from the influence of the animal extremist movement. Nearly every state has a senator or representative from the House ranking near 100. This means that they have sponsored or co-sponsored an animal extremist bill or have voted on behalf of another’s bill. Topics range from farming and ranching to pet ownership, animal breeding, performing or working animals and beyond. Spanning across several animal industries, these lawmakers propose legislation that would have serious consequences for animal owners across the country. The Humane Society of the United States (HSUS) even awarded Lesniak, Booker and Rosenthal “Humane Legislator of the Year” awards.

We argue that representatives that rank near or at 100 on their score card have proved that their career is defined by pushing this movement forward. Senators like Cory Booker (D – NJ), Gary Peters (D – MI), and Ray Lesniak (Ret. D-NJ) are examples of this. All have been endorsed by the Humane Legislative Fund and applauded by the Humane Society of the United States. Booker recently pushed the Farm System Reform Act, which he disguised as being desirable to farmers and ranchers, but due to his strong affiliations with animal rights groups, the underlying animal rights and extreme environmentalist agenda is readily apparent. Ray Lesniak, former senator in New Jersey, has partnered with groups like “Save Nosey Now” and “Animal Welfare Federation of New Jersey”. During his tenure as senator, he was a proponent of “pediatric spay and neuter” which aimed to have all puppies and kittens spayed or neutered at 8 weeks of age. Support of this type of legislation shows that he is not advocating for animal welfare, in turn, he is limiting choices for animal owners and reducing pet animals for the future.

While not on the scorecard because of her status as an assembly member (rather than a senator or representative for the House), Manhattan native, Linda Rosenthal (D), has spent her entire career sponsoring outrageous legislation that pushes forward the ideology and agenda of animal extremist organizations. She has solidly aligned herself with organizations and legislation that seeks to limit animal ownership in the state and animal industries that reside there.
Here are some of Rosenthal’s proposed bills (some of which have passed):

• Prohibit horse drawn carriages in New York City
• Ban of the sale or transfer of fur apparel
• Ban the sale of dogs, cats, and rabbits in pet stores
• Ban the declawing of cats, taking away a veterinarian’s ability to make the best decisions for the cat and cat owner
• Prohibit animal hatching projects in schools
• Assign advocates to represent animals in the courtroom, this is a practice that the American Veterinary Medical Association has spoken out against
• Require outside animal pens or inside cages to be 4 times the height and length of the animal, for example, this would make indoor accommodations for dogs larger than an average bedroom.
• Limit how long, and during which times of day, companion animals can be outside
• Designate rescue cats as New York’s official state cat
• Establish an animal law task force
• Ban possession of parts and products of certain species African wildlife, even if they were legally hunted and harvested
• Ban the raising of pheasants for sport

Where Does Your Representative Rank?

While this type of legislation may be expected in states like New York or California, it’s important for all of us across the country to pay attention to what bills are being proposed in our own state. Do you have a senator or representative that proposes similar legislation to those listed above? If so, here is what you can do about it:
1. Take the time to see what kind of legislation is being proposed in your home state.
2. If you see something that concerns you, reach out to the sponsor of that bill.
3. It is important to remember that these elected officials serve you and you have a right to voice your opinion -respectfully- regarding what has been put forward.
The scorecard is available here, where does your representative rank? https://www.hslf.org/humane-scorecard

The legislative session has started and there are numerous bills that will be up for a vote in the next few months. We will do our best to be diligent about those that are concerning to us and share them with you all so that you can make informed decisions and take appropriate action. We are, and will continue to be, working to ensure generations after ours will be able to share their lives with animals just as we have.
If you’d like to learn more about the Humane Society Legislative Fund, head to our website under What You Need To Know – Overview of Animal Rights Organizations, HERE.